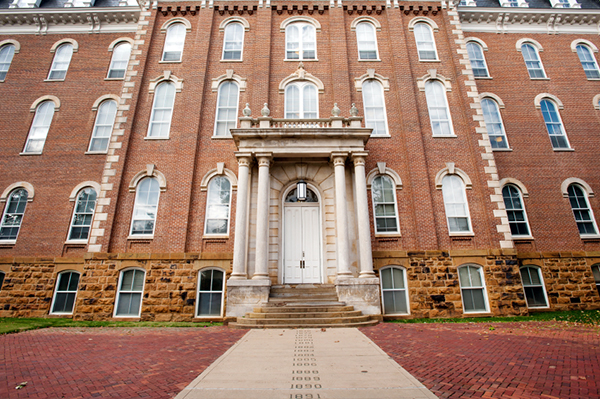 Though new music’s project isn’t essentially academic, it lives the life of an academic organism. Its funding comes from academic sources or sources built for academics (grants, stipends, fellowships). Even its population looks, by and large, academic (perhaps especially those professors who most prominently bemoan musical academicization). Its housing is academic, its residencies are academic, and it often speaks in academic language. But most of all, new music’s attitude towards matters of quality is distinctly academic.

I was taught (in subtext) that Schoenberg initialized the academic turn. New music strode into the university once its increasingly complex material required a scholarly lens. The same conservatory whispers told me that post-war Darmstadt sealed the deal of new music’s tenureship. Here, composers turned their back on the audience, writing music more akin to jargon than art. Of course, Milton Babbitt’s over-referenced “Who Cares if You Listen” (a product of heavy editorial intervention) evidenced a project characterized by the insularity and elitism born of hyper-specialization.

Let me invert this narrative in economic terms. Essentially, two attitudes towards capitalism divided the 20th century.* The former Fordist regime was typified by considerable state regulation, mass production, a burst in organized labor, and a type of progress-driven modernism (surviving largely on economic racism and sexism). Neoliberalism, the second model, characterizes the last 40+ years—globalization, outsourcing, enormous financial institutions, and above all, privatization and deregulation. As I mentioned last week, neoliberalism still exhorts objectivity—its theoretical underpinnings rely on a hypostatized, ideal market.
Think of the early musical avant-garde in a Fordist light, as part of a social movement oriented towards standardization, progress, and nationalism. New music strode into the academy to serve a political function, to conduct state-sponsored research. In the institution, musical quality meant something very specific and objective—the degree to which the thing in question accomplished scientific or cultural progress.

Fordism’s state and university sponsorships eventually evaporated. Neoliberalism annexed the academy. Academia became a type of behavior, a different way of acting neoliberal, a coping mechanism. New music’s confident stride into academia had turned into a retreat. After all—where else could it go? As far as new music is concerned, especially in America, the state practically doesn’t exist. Similarly, new music has no market; it practices academic economics.  When a composer talks about the market, they reference a theoretical market, an aesthetics of the market. Resourceless, new music adopts capitalism and behaves as a university would within it. In place of a market, new music has a facsimile thereof, borrowed from academia—a trading post of social capital.

As I mentioned in my previous article, neoliberalism has a strange attitude towards quality. First, it dismisses it out of hand—I mentioned the techniques of “it’s a matter of taste” and “go about your own business” last week. Further, though, it creates economic conditions threatening to critical conversations. New music’s academics have lost their tenure-track jobs, or are entering a world in which such jobs absolutely do not exist. Job security demands verbal (and oftentimes musical) silence about matters of quality. Further, the constant need to publish pervades every level of academic life—at all costs, the academic composer must produce. Finally, neoliberalism quietly reintroduces objective metrics of quality compatible with academic overproduction. A para-language of quality—quality weighed in terms of social capital, quality as a type of potential energy. Can we organize a conference about this? Will this proposal win grants? Will this piece of music garner social media attention for this institution? Yes or no?

What about the enclave of “stylistically academic” music? Its changing values are not dissociable from neoliberal social norms, despite this genre’s commendably protective outlook. Against our economic introversion, my generation’s music often indulges in compositional self-promotion (our sometimes-insincere collective turn to vector graphics software, or our embrace of impressive electronics arrays). At a higher pay grade, Fordist remnants persist. Much of the older academic-style music does rely on a tacit collective colonialism: “this aesthetic best contributes to the progress of music.” This genre’s tenureships are perhaps the hardest to find—cautious professionalism every bit as requisite for survival. Both listless silence and eager networking cannot help but infiltrate any applicant class of composers, and I certainly can’t begrudge them for it.

If one wants new music to remain in the academy, how does one help to make it hospitable? How do we take its social behavior and make it contrarian, vital? How can we combat the characteristically academic forms of racism, sexism, and other discriminating obstacles to thought and speech? What economic models are permissive to tenure, or propose models of employment less threatening to critical discourse? Within our extant system, how can we re-establish safe spaces to talk about quality? Though this might require a radical change in the economies involved, I think this last stage is somehow the least impossible. If enough people agree that institutional dangers impinge upon the quality of their work, perhaps some momentum can gather. Though clubs and small social organizations have the danger of elitism, they can be great places for composers to share opinions and strategies. I also encourage any of you with composition students to use your studios in this way. I learn the most when I’m empowered to air my thoughts and pressed to explain them.

However, if one wants to find contemporary music a new home, where can it go? I would hate to watch new music proudly immerse itself in the market. (Personally, I hope that art can remain a space in which one can at least pretend to listen or look or learn from something in a way that escapes capitalist modes of entrainment.) Because I believe in human agency, though, I do also believe in margins—the frayed limits of the market, the zones not completely under its control. If new music must find a new home, it needs to do something incredibly extreme.

Personally, I’m conflicted. Though being an academic is the most comfortable way for me to “be capitalist” (a behavior in which I am often completely complicit), I look at my prospects for employment with great anxiety. The tremulous instability looming over my future makes me question the sustainability of my practice. Certainly the structure of new music must change drastically, re-evaluating its kinship with academic-capitalist behavior. Frankly, I think new music ought to remodel itself into art, taking the shape of a social organism whose funding comes in spurts from fringe and diverse places. I value the new music created out of small constellations of people, from long-term and close-knit partnerships, the new music whose instruments and raw materials reflect intimacy and care with their arrangement. New music needs a relevance borne of its own intrinsic, immanent urgency—a social structure powered by the need, not the professional compulsion, to make things. As a friend told me last week, one might even define quality as these conditions of production itself. I propose my definition of quality here: Quality means both a social environment conducive to the expression of immanent musical necessity and the discourse of this immanence itself. Quality judgment means social criticism and the affirmation of its preconditions.

I am building something. In my first post, I presented a dire situation. Here, I’ve drawn a fork in the road. My next two posts will deal exclusively with quality. In the first, I’ll talk about performance, etiquette, and resensitizing oneself to music. In the second, I’ll talk about “making the air heavy,” magic-eye puzzles, “believing that music isn’t an exercise,” and other ways I talk about quality with my friends and peers.