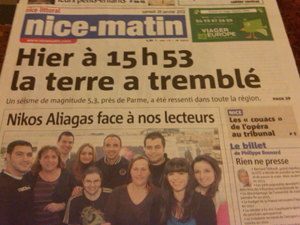 I’ve been a bit distracted by what has been happening in the outside world.

There’s lots to report on from my trips to Paris and Nice. I’ve been so busy, I apparently didn’t even notice an earthquake in Italy whose tremors were felt throughout southern France. But that will have to wait for a later date, as I am now in Cannes in the midst of the hurly-burly that is MIDEM. When I attended this mega music trade show for the first time last year and kept telling veteran attendees how amazed I was by the breadth and depth of it all, most of them sighed and bemoaned that what I was experiencing paled in comparison with what MIDEM used to be. It’s now a year later, and I’ve become one of those veteran attendees. I was told that a lot of people might not arrive yesterday when it all began, but it’s now the beginning of the second day and it still seems much quieter than last year.

But while there are fewer exhibitioners and fewer attendees overall, there are still so many sessions and other activities that it’s nearly impossible to soak it all in. Soak is perhaps an apt metaphor—it was raining when I arrived yesterday and never completely let up, although once at the Palais des Conference I was pretty much indoors until I ventured out on the streets of Cannes to have dinner and attend one of the myriad MIDEM showcase performances happening in local venues. 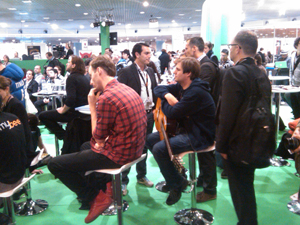 Among the attendees of MIDEM 2012 some musicians are clearly visible.

One thing that is significantly different about MIDEM this year is that there is now a lower artist rate for attending, so there are more individual musicians and bands here than before. It’s a welcome demographic shift which, as a result, has attracted a new kind of exhibitor, like the company Tonara which has developed software that enables your tablet to become an interactive digital sheet music reader that can follow you as you perform a score that is loaded on it, eliminating things like page turns (not even a pedal is needed). It can presumably understand when you are making a mistake, but they have yet to figure out how to receive input from percussion instruments or even from an accordion, and all the music that is available for it is standard notated public domain music. They’ve yet to negotiate deals with living composers and publishers of works still protected by copyright. It would be interesting to see if they could ever get this program to work with a John Cage score.

Another shift is that there is far more of an emphasis on live performances. MIDEM has created its own three-day music festival which takes place on three consecutive nights but, as before, there are many off-shoot showcase concerts in local venues presented by various exhibitors based in countries around the world. Of course, there are still tons of sessions. The first one I attended yesterday was a talk about using social media to promote music given by a fellow New Yorker, Ariel Hyatt of Cyber PR. I learned some useful statistics like 71% of all companies now have a Facebook presence and 59% are on Twitter, yet Twitter and Facebook combined only account for 3% of the revenue artists accrue from the promotion of their music online. Emailing newsletters directly to fans still yields the greatest draw: 30%. I also learned that the person who writes Britney Spears’s tweets is a friend of Ariel’s named Cassie. So much for the transparency of the new media paradigms. 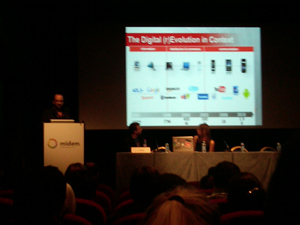 There were a lot of references to 50s television in the YouTube panel at MIDEM. Well, like one of the classic TV shows from that era, The Outer Limits, YouTube now controls the horizontal and the vertical.

Then I attended a session sponsored by YouTube, which this year has an even bigger presence at MIDEM than last year. Patrick Walker, who is YouTube’s senior director of music for Europe, the Middle East, and Africa, gave a very slick presentation overall although there was something somehow ironic in his not being able to get a YouTube video to load after several attempts. To this day, every time I see a presentation involving technology there’s always some kind of glitch. Yet in a world where Google (which owns YouTube) has greater annual profits than the four top record companies combined, a very successful technology company that seems to have a virtual monopoly on several key aspects of web browsing has become the music industry’s new gatekeeper. Some more stats: YouTube has 4 billion views per day, and 800 million unique users per month; of those, 500 million views are on mobile devices. (That number tripled in 2011.) San Francisco-based Chris LaRoca, YouTube’s project manager for music, talked about how individual artists and record labels could track their content on YouTube via their custom designed app Audio ID and Content ID, which should enable them to actually receive payment from the usage of their intellectual property. I’m curious to learn more about how this works in real life. 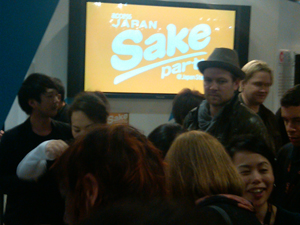 The various drinking parties at exhibitions at MIDEM bring people with all different agendas together.

After that it was free sake time at the Japan exhibition booth. Even with fewer attendees, the parties still go on. The last of the sessions I attended yesterday was a panel of intellectual property lawyers talking about termination rights. There is currently legislation under consideration in the United States that will revert the rights on sound recordings from the record labels to the recording artists who made the recording, effective January 1, 2013, for recordings released in 1978. However, it has yet to be determined who all the rights holders are: the producer of a recording in many cases has as much of a claim to ownership as the principal performer, and then there are sidemen who are not always identified who can be entitled to up to 20% of the revenue. Since the rule will only apply to the United States, it is possible that many recordings will be controlled by different stakeholders in the USA and abroad. Such a potential licensing quagmire should prove an even greater challenge in a world which the internet has been making into more and more of a single territory, but that wasn’t discussed.

I ended the evening by attending part of a showcase presented by Jamendo, a web business offering totally free legal downloads from artists from all over the world by circumventing one of the key licensing protocols: none of the groups whose music is featured there are allowed to belong to a performing right’s society. The band I heard was a Swedish indie rock group named Emerald Park, who were somewhat reminiscent of Athens, Georgia, bands. While a violinist conjured the folk incursions of R.E.M.’s Peter Buck, a backing female singer added a B52 Kate Pierson touch to the vocals, although Emerald Park’s singer was not quite Michael Stipe or Fred Schneider. Everyone there seemed to be having a great time, but after hearing four of their songs in a very loud and extremely crowded club where beers were 8 euros each, it was time to finally check into my hotel and call it a night. 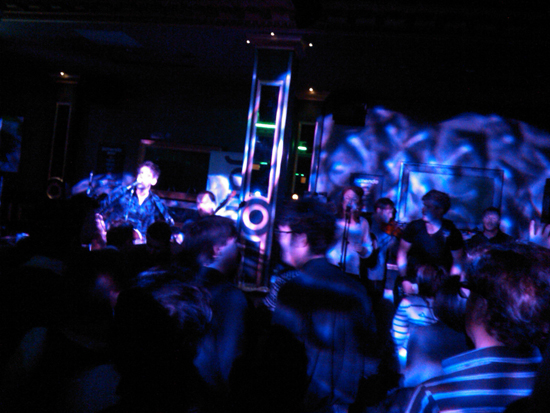 The Swedish band Emerald Park was the headliner at Jamendo’s Showcase of bands unrepresented by performing rights societies.

More about today’s activities later. Now it’s time to head back to a session.