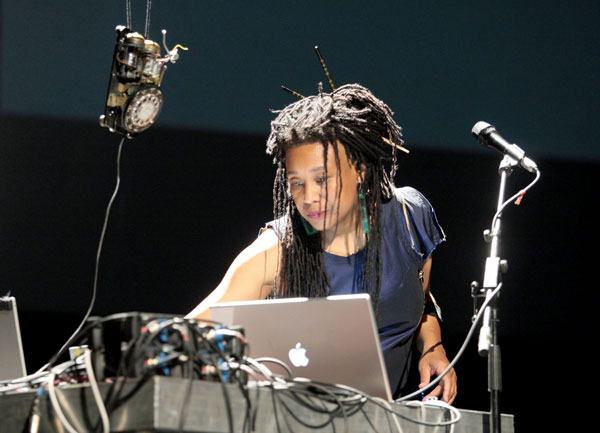 In many ways, the composer-performer-electronic artist Pamela Z is a quintessentially 21st-century musician. Her work is created from digital and prosthetic technology, in particular the BodySynthTM MIDI controller;[1] it moves fluidly between genres and media; and it often addresses the subject of global mobility. Her titles Voci, Baggage Allowance (an example of the sort of net-music discussed in my last post), Parts of Speech and, in particular, Gaijin, all point towards topics of travel, language, and foreignness.

In Gaijin (2001), written after a six-month residency in Tokyo, Z explores the theme of foreignness. (“Gaijin” is Japanese slang for foreigner.) In “Nihongo de hanasoo” (“Let’s speak Japanese”), she reads headings from a Japanese language textbook against a sonic backdrop of Japanese phonemes and other (non-verbal) vocal loops. Other movements include an application for a United States green card and texts in multiple languages about identity and alienation. Across the piece, the key is the gaijin’s awareness of her fundamental outsidership, and her attempts to mitigate this. Where true assimilation is not possible, encounters become negotiations between relatively opaque entities.


Rather than attempting a synthesis, Z’s music highlights—and perhaps even celebrates—difference. Through her use of digital delays to loop and layer her own voice, and her virtuoso changes between vocal styles (a particular feature of Voci), she presents identity as a matter of polyphony, sometimes between irreconcilable parts. Considered on an intercultural level, this is a view in which places and people retain their unique definition, regardless of the difficulties this may entail.
In her study of site-specific art One Place After Another, the art historian Miwon Kwon characterizes the life of the contemporary artist:

Typically, an artist (no longer a studio-bound object maker; primarily working now on call) is invited by an art institution to produce a work specifically configured for the framework provided by the institution (in some cases the artist may solicit the institution with a proposal) … There follow repeated visits or extended stays at the site; research into the particularities of the institution and/or the city within which it is located (its history, constituency of the [art] audience, the installation space); consideration of the parameters of the exhibition itself (its thematic structure, social relevance, other artists in the show); and many meetings with curators, educators, and administrative support staff, who may all end up “collaborating” with the artist to produce the work. The project will likely be time-consuming and in the end will have engaged the “site” in a multitude of ways, and the documentation of the project will take on another life within the art world’s publicity circuit, which will in turn alert another institution to suggest another commission.[2]

Kwon is talking here about visual artists, but replace the words “site” and “institution” with “performer” or “performers” and she could equally be describing the activities of many contemporary composers, whose outputs are often determined by the series of musicians they engage with or are commissioned by to produce new work.

It seems that the increasing prominence of one-off grants, residencies, and so on within the economy of new music—as opposed to more stable sources of income from publication, performance, and recording rights (or, looking further back, patronage)—is encouraging a certain nomadic practice among composers, much like that of visual artists, especially among those unwilling or unable to support their work with full-time academic positions. Z’s own CV, like that of many of her peers, is full of references to exhibitions and awards given across the US and internationally. Such nomadism is in turn contributing to an increase in works that are composed for specific performers or ensembles (as well as for specific locations or occasions, although these are less common). It is then a logical step for the composer to work closely with those performers, in a more or less collaborative spirit. And at this point the performer starts to take on the characteristics of one of Kwon’s sites.
The rise of the performer as “site” is a product of several late-century forces: as well as the economy of new music that I have just mentioned, there is also the increasing autonomy of new music ensembles and their need to establish a unique brand (read: repertory) for themselves; the legitimacy that performer collaboration suggests—a seductive riposte to the stereotypical ivory-towered modernist and a more general turn across the arts towards an interest in site, collaboration, and process as practice.
The rise of these forces since the late 1970s or so has paralleled an increase in the number of composer–performers. The template was largely established in New York from Fluxus, through the early minimalists, and on to Downtown artists from Laurie Anderson to John Zorn. Yet despite its local origins, it became a model that has proved useful to composers in the more nomadic 21st century. If composer–performer collaborations have become a paradigm today, it should be no surprise that as their careers become more globalized and decentered, many composers and performers are combining the two roles: becoming their own “sites,” in fact.

This revived relationship of composer to performer may in part be a consequence (and often a welcome one) of the pressures and enabling vectors of modern-day globalization, but what does it mean when an artist like Z takes on the role of both composer and performer, when she becomes the “site” for her own work? What happens when her compositional work is guided by the particularities of her own biography, the grain of her voice, the movements of her body?
George Lewis has connected Z’s work to that of the West African griot, a sort of oral historian, musician, poet, and storyteller:

Z is part of a generation of women sound artists, including Laurie Anderson, Hildegard Westerkamp, and Sarah Peebles, who reassert the human need for exchanging stories in a logocentric culture that has privileged written over oral modes of discourse, and that, reflecting its valorization of land and property rights, has favored a transient, atemporal notion of space over historical time.[3]

Lewis describes a world comprised of difference and exchange, one that is made out of histories and the personal, rather than the grand narratives or formal structures determined by (largely masculine, capitalist, Western) societies. By making herself the site, Z, and artists like her, not only captures something of the transnational mobility of contemporary artists (as well as, in much less comfortable terms, that of the exile, immigrant, or refugee), but also embodies (and highlights) its temporary resolution in this place or the next. She becomes the site, the site itself becomes transient. Z’s work, suggests Lewis, articulates a critique of our age’s obsession with space and location over time and story, and thus of globalization and its ideal of mobility itself. 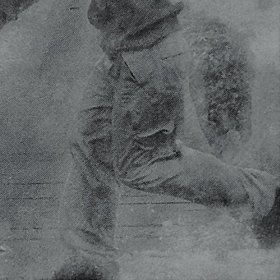 Listen to “55 (3)” from 55: Music and Dance in Concrete
© 2014 Wayne Horvitz. Streamed with permission.
Though Wayne Horvitz’s music has always been somewhat difficult to classify, it has usually adhered to a “jazz” sensibility. Even Wish the Children Would Come on Home, his previous album released back in May of this year which consists predominantly of pre-composed music performed by a brass quartet, exudes a jazz feel despite the overall lack of improvisation (except for a few tracks where Horvitz joins them for some impromptu mayhem). However, no matter how definitions can be finessed to tie all sorts of loose ends together, one would be hard pressed to associate his latest record, 55: Music and Dance in Concrete, with swing, bop, fusion or any of the myriad subgenres that have expanded this way of making music over the past century. Yet it is still clearly Wayne Horvitz and is utterly fascinating.

Each of the album’s tracks is cryptically titled “55” followed by an additional number, but those second numbers (which range from 1 to 29) are not presented sequentially. Horvitz, with whom I corresponded via email, was born in 1955 and was 55 when he began composing this music. So despite the seeming abstraction, this is very personal music. But it gets even more complicated. Though the opening track on the album is “55 (1),” it is followed by “55 (15)” then “55 (29)” and “55 (10)” etc., almost inviting listeners to determine their own path through the material. According to Horvitz, the tracks were simply titled in the order he created them but then he later sequenced them in an order that seemed more organic. The numbers go as high as 29, but he never completed three of the tracks. The 26 tracks, scored for various combinations of wind and string instruments, were actually culled from a total of 110 musical fragments. These fragments consist of performances of 55 pre-composed Horvitz chamber music pieces plus 55 improvisations all of which took place over the course of four days in the concrete bunkers and cistern at Fort Worden in Pt. Townsend, Washington where they were recorded by Tucker Martine (who has also worked with R.E.M., The Decembrists, Beth Orton, and others). Then Horvitz electronically manipulated and remixed these recordings so that the final audio result sounds nothing like what the musicians originally played. Then, these resultant pre-recorded tracks served as the sonic component for a modular site-specific multi-media work presented in a variety of locations within Fort Worden involving choreography by Yukio Suzuki and video by Yohei Saito.

Taken out of its original context the music still manages to comes across as part psychedelic soundtrack (think Barbarella), part mysterious fun house (think Sleep No More). I personally wish that I would have been able to experience the visuals as well as the music, though I’m not sure a DVD would have captured the complete experiential immersion that the collaborators were aiming for. At least the LP (yes, it’s available on LP!!!) comes with some large, tantalizing photos of the original production. Though there are only 13 tracks on the vinyl release (it has not been issued on CD!), all 26 completed tracks are available digitally on a download card included with the record. Additionally there’s a wealth of information (including some tantalizing video excerpts) on a dedicated website about the project.