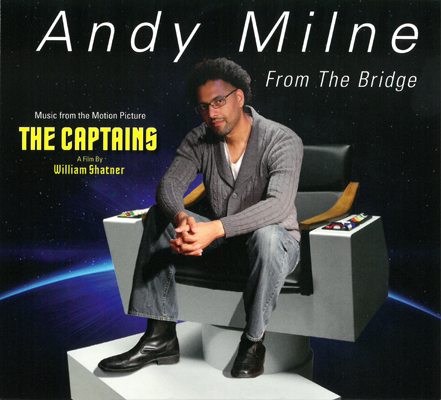 How did William Shatner choose eclectic jazz pianist/Dapp Theory frontman Andy Milne to score his series of Star Trek documentaries? It turns out that Avery Brooks, the actor who played Captain Benjamin Sisko for seven years on the Star Trek spinoff Deep Space Nine, is an accomplished jazz singer and pianist in his own right and had performed with Milne. So when Shatner asked Brooks whom he thought could create music for this project, he immediately suggested him. Milne’s Trek score (released on the CD From The Bridge) has led to multiple performances at Star Trek conventions. But for this lifelong science fiction fan, the greatest experience has been sitting in the captain’s chair on the Enterprise.

The cover of Milne’s From The Bridge Listen to excerpts from the CD here.

(You can read more about Milne and his music here.)