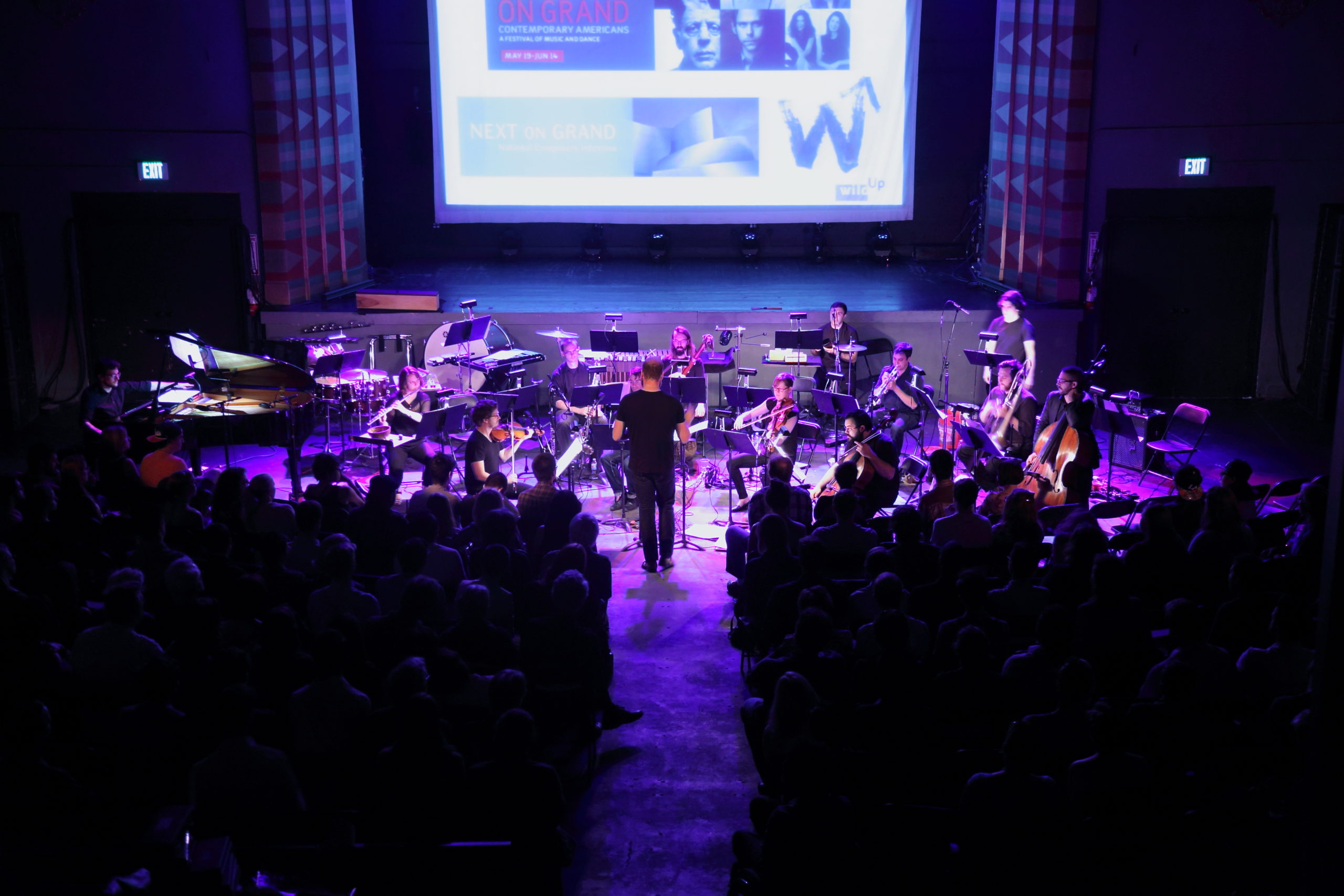 “This is a piece that does something to you when you play it,” says Christopher Rountree. He’s about to conduct the ensemble wild Up in a performance of a new work by Jennifer Hill, a composition student at the University of North Texas. Entitled in memoriam my liver*, the piece demands that the trumpet player (in this case, Jonah Levy) hold a high C almost continuously for five minutes at a nearly inaudible volume, encircled by hushed, furtive gestures from the rest of the ensemble. It’s a risky gambit—“it’s incredibly physically and psychologically demanding for the performer,” conceded Hill—but one that pays off. 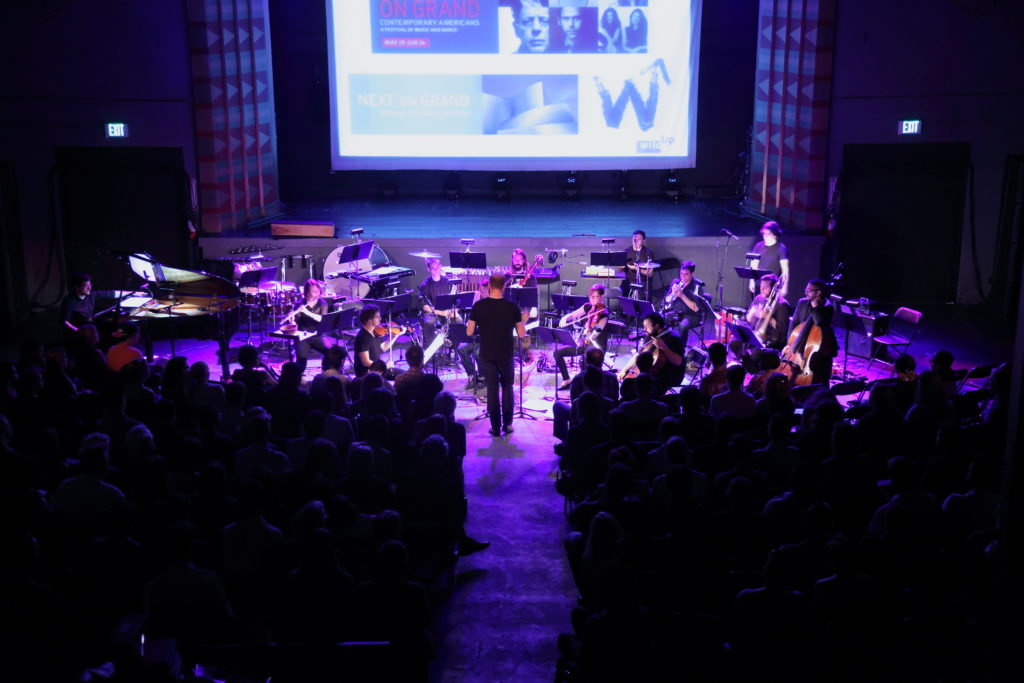 wild Up in concert at the Regent Theater. Photo by: Craig T. Mathew/Mathew Imaging

This was just one of many memorable moments at wild Up’s May 30 concert at the Regent Theatre in downtown Los Angeles. The event was the culmination of the National Composers Intensive, a program organized by the LA Philharmonic that invited ten young collegiate composers to write for wild Up, as well as attend various rehearsals, masterclasses, and concerts along the way. Hill was one of these selected composers, along with Daniel Allas, Emily Cooley, Natalie Dietterich, Patrick O’Malley, Jose Martinez, Anna Meadors, Laura Schwartz, Andrew Stock, and Wei Guo. All the works were read and recorded by the ensemble, with a few chosen for performance on the final concert.

While readings of student works are not uncommon in the new music world, the Intensive was unusual in that composers had multiple opportunities to hear and revise their works. After composing an initial draft, wild Up recorded read-throughs of the pieces that allowed the ensemble to give video feedback to the composers. After two weeks, the composers submitted a second draft, and during the week of the concert, last-minute changes could be made between rehearsals before the final reading. 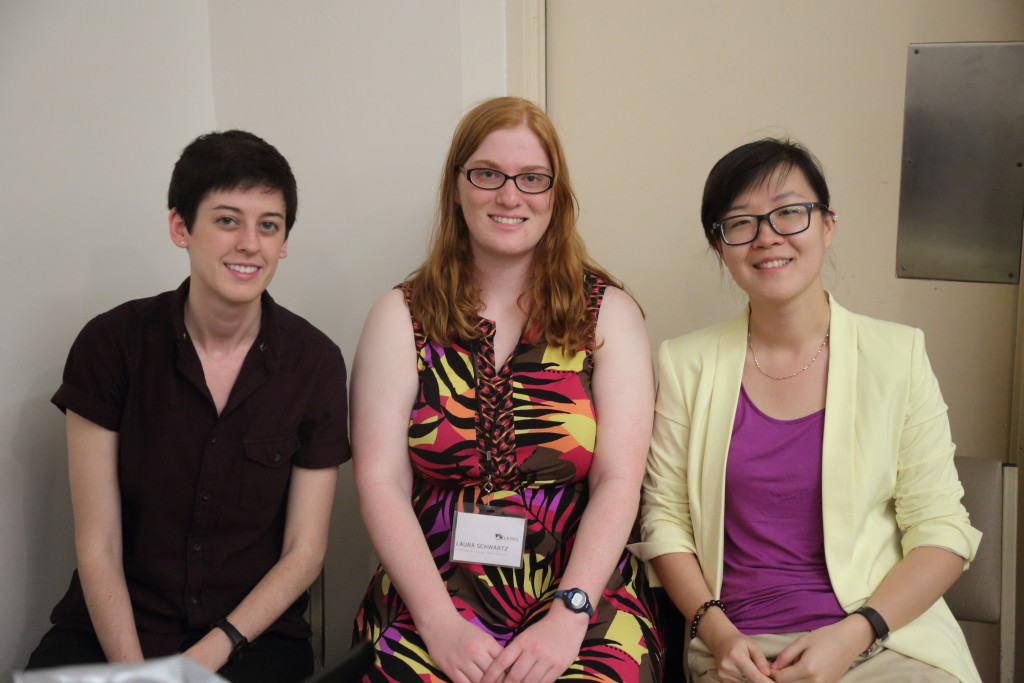 Some composers took advantage of this opportunity to make significant revisions to their works. Martinez, a master’s student at the University of Missouri, wrote the salsa-inflected Illegal Cycles, combining piano montunos with aleatoric figures and heavy metal influences. He removed layers of material from the score before the final reading to make the complex grooves more approachable for the ensemble. “During the final rehearsal it came to life…the groovy Latin vibe takes some time to marinate in the brain,” he acknowledged.

Dietterich, a master’s student at the Yale School of Music, received feedback about articulation and added considerable detail to her work Something Twisted before the final reading. O’Malley, a master’s student at the University of Southern California, also made cuts to certain parts in his work Ouroboros and added mutes to the brass to balance the ensemble in certain sections. Allas, also a University of Southern California student, made significant changes to the notation in his composition smear’d. Allas originally used a system of stemless noteheads and dotted bar lines to indicate the approximate placement of notes, while the ensemble favored notating these gestures as complex rhythms. Eventually, he removed the dotted bar lines but kept the stemless noteheads, a compromise that satisfied the ensemble. “wild Up committed fully to the notation style that I settled upon,” said Allas. 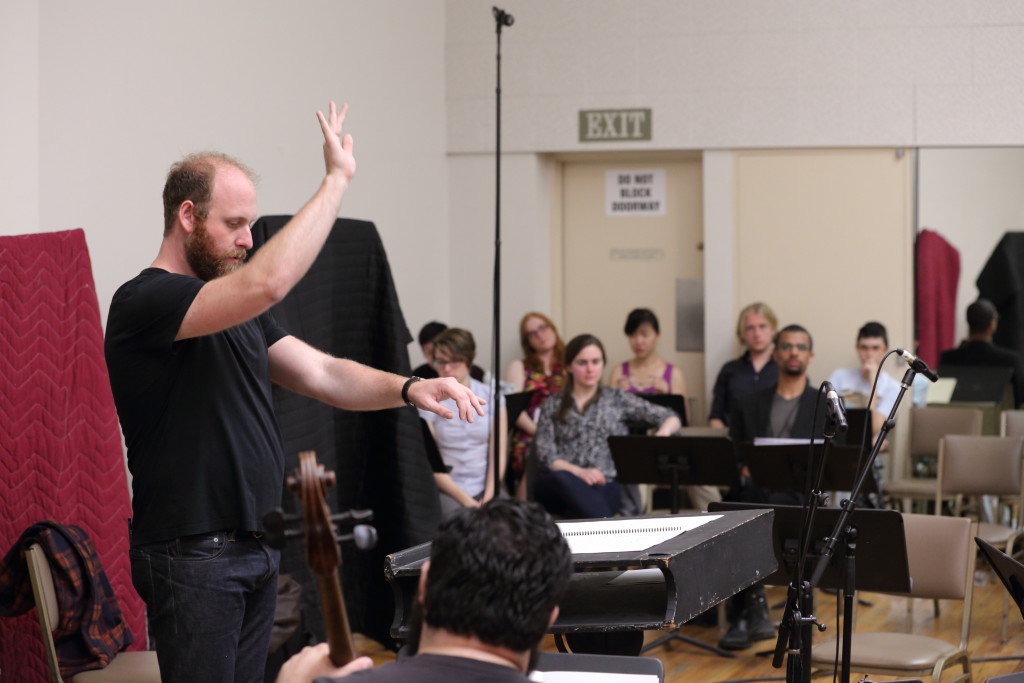 Other composers were more obstinate. Stock, a student at the Cleveland Institute of Music, conceived of Roots, Bone, Skin, Ghosts (2) as a set of interlocking parts without a traditional score. “I got some pushback about the layout of the printed materials, but that’s the way they ended up playing it and it worked out,” said Stock. Hill’s high C was a similarly fought-for moment. This is one area where the Intensive distinguished itself from the typical new music reading format. In programs with a single reading session, interesting things often get sacrificed at the altar of practicality, and composers learn to dial back their ambitions. Here the exact opposite was true. It’s easy to imagine a less intrepid ensemble refusing to take these risks, or even sabotaging the performance with surliness, but to their credit, wild Up played these composers’ works with utter conviction.

Alongside the works by Allas, Dietterich, Hill, and Stock, wild Up programmed two works by slightly older (post-emerging? pre-established?) composers Andrew Tholl and Nina C. Young, as well as Public Kaleidoscope by Andrew Moses, a student of the LA Phil’s Composer Fellowship Program for high school composers. Together, these works represented three generations of young(ish) composers. Notably absent from the program were any of the usual suspects when it comes to old guard, established composers, and to be honest, their presence was not missed in this context. All of the music was original and well-crafted, and the students’ works held their own alongside the works of their more experienced counterparts. 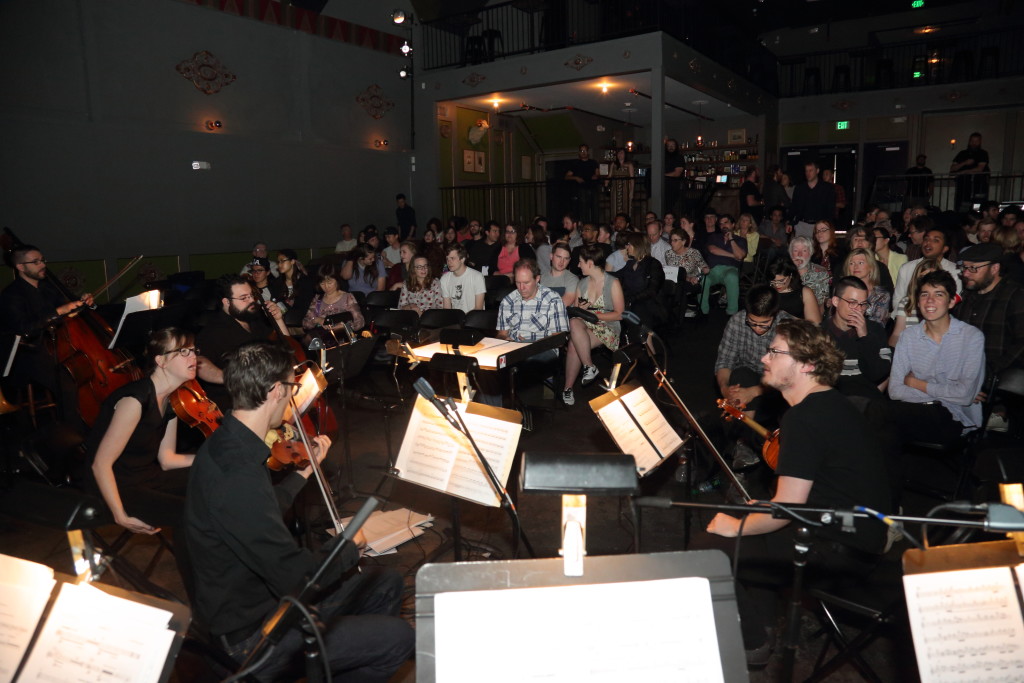 View from the stage. Photo by: Craig T. Mathew/Mathew Imaging

The Intensive was also cleverly planned to coincide with LA Phil’s Next on Grand festival of contemporary music, which allowed the fellows to attend several concerts, as well as schedule masterclasses and lessons with composers James Matheson, Julia Wolfe, Steven Mackey, Michael Gordon, Sean Friar, and Caroline Shaw. In the small amount of free time remaining, the students were able to experience a little bit of local culture. “I also had some very good tacos in downtown LA,” said Stock.

* The full title is actually in memoriam my liver subtitled i hate that you’re stoned all of the time subtitled Coldness and Cruelty: The Art of Masoch subtitled I have dozens of titles subtitled $1 lone star and i;m sry=