(Text by Belinda Reynolds with video content by Ashley Killam)

I first wrote about the lack of works by living composers for younger players 15 years ago. Fast forward to today. Sadly, essentially nothing has changed. Contemporary music is still desperately needed in the teaching repertoire for most orchestral instruments.

Back then, I addressed the problem by creating a set of progressive level instrumental books, called CUSTOM MADE MUSIC SERIES (CMM). The 6th book has just been published by PRB Productions: CUSTOM MADE MUSIC VOLUME 6 – 10 Progressive Solos and Duos for Trumpet. Using this new CMM addition as a guidepost, I wish to share with you some tips on how to successfully compose for student players and make a lasting difference in new music for all of us in today’s challenging times.

Step One:
In approaching composing at the student level, find a collaborator who is both a player and a teacher of your chosen instrument(s). They will bring the expertise and knowledge needed to help you create a project that can make lasting change in the pedagogical repertoire. They can come from any avenue in your life – a former teacher, a colleague, a friend, a connection, anywhere! For my new project I collaborated with trumpet player/music educator/new music advocate Ashley Killam (she/her). She actually found me when she was researching composers to be listed in her open source music catalog of brass music by underrepresented composers. We wound up having a conversation about students and the trumpet repertoire and I asked her if she would be interested in being the Editor of a new CUSTOM MADE MUSIC book for trumpet. She was and thus began our project.

Watch the video below to hear Ashley’s point of view on the CUSTOM MADE MUSIC collaboration.

Step Two:
Together identify the technical gaps in the pedagogical repertoire of the instrument(s) you both wish to approach with your project. In this case, Ashley immediately knew what was needed, thanks to her extensive experience in working with music students and teachers across the country and in her studio. After a Zoom session and a few emails we decided to create a book mostly containing solos and some additional duos for three levels of trumpet players: beginners, late beginners, and early intermediate learners.

With each work I introduced the basic techniques that Ashley said were essential concepts for young trumpeters to master. I also kept all of the compositions limited to a one octave range because it was the maximum reach for most beginner players. All of these issues were addressed in composing a tasty melody for them to play. For me such challenges are creativity drivers; I believe in the motto “Limits Create Possibilities”.

Watch the video below to hear Ashley describe in more detail the ins and outs we addressed in the creation of these new compositions along with her playing one of the solos for beginner, “Carefree.”

Step Three:
Do workshops during the entirety of the creation of your composition(s). From day one I included Ashley almost as an equal partner, for I believe that bringing musicians into the creation of a new piece just makes for a higher quality composition. This is almost essential when composing for students. I learned this during my 25 years as a member of Common Sense Composers Collective, as well as with my own independent career. Ashley found this approach to be extremely rewarding, nourishing and a wonderful creative outlet for her. Together, along with her students, we ironed out the kinks and even found some new possibilities for some of the pieces. The results, we feel, are a stellar group of small pieces that young trumpet players can easily learn and gain technical skills while doing so. Take a look/listen below to one of the pieces that came to its true ‘life’, thanks to workshopping it:

Step Four:
Beta test all of your project before you bring it to its premiere and to market, so to speak. After workshopping your music, before it hits the limelight have the intended students or a similar group of learners “test” out your pieces. These young players are the final arbitrator of whether your music will or won’t work for them, regardless of what you and your collaborator have done thus far. What may seem idiomatic to a professional can sometimes seem weird and awkward to a newcomer. Ashley did this with many of her students, who gave her insights as to what articulations to finally use in some of the works.

Step Five:
Be enterprising and do tons of outreach and marketing to insure your project lives beyond the first performance/publication release. All too often a new music gem is lost into the past after its premiere because nobody pushed hard and long enough to give it a foothold in the repertoire. Compared to 15 years ago, marketing is easier than ever thanks to social media and other internet resources. Both you and your partner must utilize these tools. Urge your friends to help and reach out to all of your professional contacts that may have interest or contributions to make to your release. Outreach in the music education community is also essential, even more than ads. Get your music into the hands of teachers via networking with educational organizations, instrumental guilds, and music conventions, among other areas. Bring it to classrooms and teaching studios with creative workshops showcasing your project from the start to the finish. Folks love to know how something works before they purchase it! Once your project is ready for the public both you and your collaborator must invest in the time and effort to do these actions; creating room in the repertoire of an instrument is a long term investment. You must get fans of your project on board, those who teach the instrument(s) and those who play it/them.

I hope this presentation will inspire you to try writing at the student level. Don’t worry if you think your style is not ‘kid-friendly’. I have found that EVERY style can be student friendly if it is tested and presented in a way as to welcome the learner into its universe and not alienate them. Young players are mostly more open to the sounds of new music than their older counterparts. Your efforts will plant the seeds for long term sustainable growth of new music in both today’s and tomorrow’s professional players and audiences. In addition, it will help both your creative skills and your career trajectory as an artist. I have received numerous performances and commissions thanks to the reputation of my work in composing music for younger players. I welcome you to try this venture! 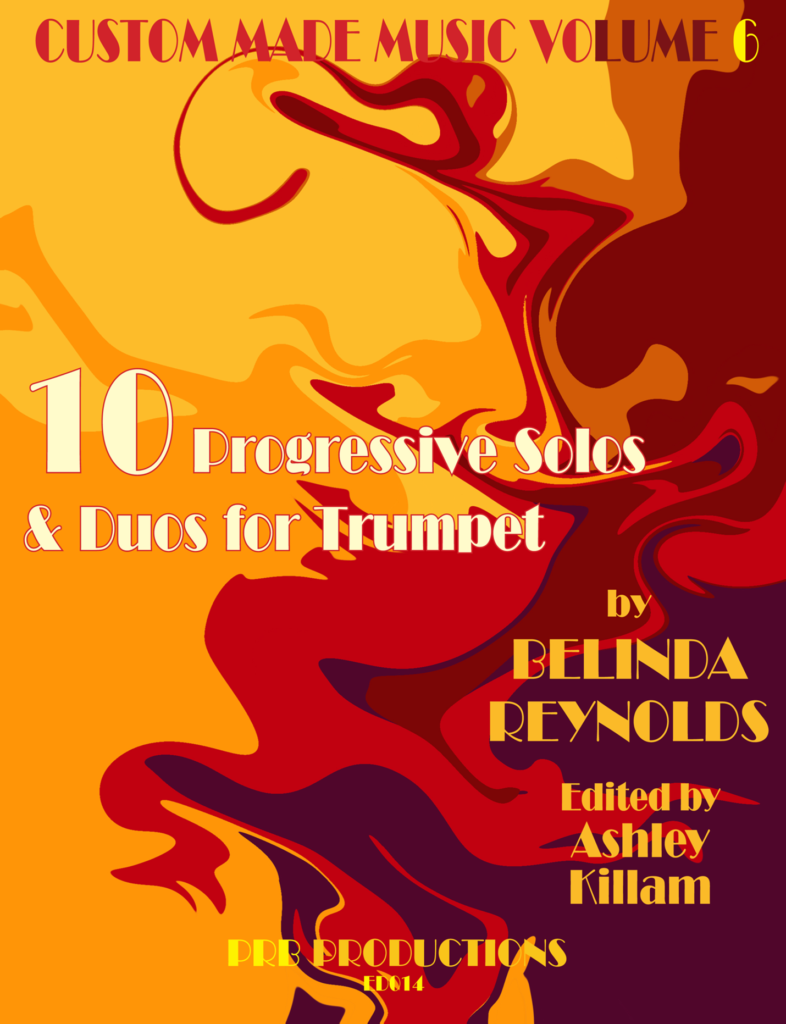 Belinda Reynolds, Composer
Raised in a Texan-Florida Air Force family, Belinda Reynolds (she/her) now considers herself an “adopted native” of California. Her music is performed worldwide and has been featured in such festivals as Lincoln Center’s Great Performers Series, the Spoleto Music Festival, and many more. As a Music Educator Ms. Reynolds is in demand nationwide helping children learn to create music. For more information, go to www.belindareynolds.com.

Ashley Killam, Editor
Ashley Killam (she/her) is an international speaker, researcher, and educator based in Radford, Virginia. Killam is President of Diversity the Stand and General Manager of Rising Tide Music Press. Killam’s work centers around educating musicians on the importance of making ethical and sustainable changes in performing and teaching music. For more information, go to www.ashleykillam.com.