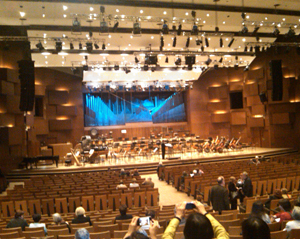 While I listen to music from all time periods on recordings, when I attend a live concert it is almost always because it features contemporary American music, and usually a premiere. After all, time is limited and much as I might want to be able to, I can’t possibly hear everything; a concert featuring a premiere at least contains music I wouldn’t be able to experience without having to travel to an appointed place at a time determined by someone else’s schedule. So it might seem strange that between last Thursday and this coming Friday, I will have attended a total of six orchestra concerts, all of them presented by Carnegie Hall. What’s even stranger about that is that all six programs feature nothing but music by American composers.

Last Thursday, I attended the latest installment of Orchestra Underground, the American Composers Orchestra’s series at Carnegie’s Zankel Hall. Of course, it is the mission of the American Composers Orchestra to present concert programs devoted exclusively to music by American composers, so it’s not particularly unusual for them to feature such a program. Although the variety in their latest concert offering was off the charts even by their standards—Michael Daugherty’s Trail of Tears, one of the most substantive flute concertos I’ve ever heard; Aaron Copland’s classic Clarinet Concerto; and composer/singer-songwriter Gabriel Kahane’s Crane Palimpsest, a song cycle performed by Kahane (on vocals, guitar, and piano) with the ACO combining stanza’s from early 20th-century American poet Hart Crane’s To Brooklyn Bridge with Kahane’s own lyrics. If that wasn’t variety enough, the concert opened (again, opened!) with a piece by Milton Babbitt—From the Psalter, a relentless setting of Elizabethan poet Sir Philip Sidney’s versions of three Old Testament psalms for soprano and strings. Any concert that opens with Babbitt is making a statement, and this dedicated performance—especially enhanced by the assured singing of Judith Bettina—is hopefully a sign that his extraordinarily thought-provoking and challenging music will remain in the repertoire even though he is no longer with us.

Saturday night was an all-American program by the conductor-less Orpheus Chamber Orchestra in Carnegie’s main hall, though admittedly all was not new. Although it’s a piece I love, I certainly didn’t need to be at Carnegie Hall to hear yet another performance of Copland’s Appalachian Spring; I believe I’ve even heard Orpheus play it live before. And Leonard Bernstein’s Trouble in Tahiti is also not terra incognita, although Orpheus gave the premiere performance of a newly created instrumental suite arranged by Paul Chihara. What was completely new, however, was Clint Needham’s When We Forget, a world premiere that is part of Orpheus’s ongoing Project 440 initiative, and Chris Thile’s mandolin concerto, Ad astra per alas porci (named after John Steinbeck’s personal motto, a corruption from Virgil’s Aeneid meaning “to the stars on the wings of a pig”), a work which Thile has performed with eight orchestras all over the United States but never before in New York City. When Thile played a passage from a J.S. Bach partita as an encore, despite how excitingly he played it, it was old music that sounded like an interloper—quite a change from the usual paradigm of new music at an orchestra concert.

And starting Tuesday, the San Francisco Symphony will be in residence at Carnegie Hall for four concerts devoted exclusively to the music of American mavericks—Charles Ives, Henry Cowell, John Cage, Morton Feldman, plus the New York premieres of new pieces by Meredith Monk, Mason Bates, Morton Subotnick, and John Adams.

Now if only there was this much contemporary American music on orchestra concerts all year round. But then again, if there was, I’d never have time to be at home to work on my own—decidedly non-orchestral—music. Then again, with all this new orchestra music filling my ears, I might eventually find myself wanting to write for this extraordinary ensemble which I’ve loved the sound of for decades but which has always seemed somehow unrelated to my own personal life and times. Of course, if American orchestras featured a work by a living American composer on every single one of their programs, perhaps I and countless other people I know would not think that the orchestra somehow does not belong to us. Then again, given the current business model and infrastructure for orchestras in this country, there’d be no way for them to perform all the music all of us would write if every composer suddenly felt inspired to do so. There’s already so much great contemporary American orchestral music that already exists that rarely if ever gets performed, so why add to that pile? There are currently a staggering amount of new music-oriented chamber groups which offer myriad possibilities for getting one’s music played. Were it possible for there to eventually be a similar flowering of new music oriented orchestras, there just might finally be a golden age for new American orchestral music.