I’m a bit late this week in contributing my regular ad-hoc chain of paragraphs to the NewMusicBox blog area, something I still think of as “Chatter” and, in my most nostalgic moments, as “In the Second Person” commentary. And there’s plenty of reason for me to feel nostalgic, which is the same reason why these paragraphs are getting posted later than usual. I spent the entire weekend at the 2012 conference of Chamber Music America which culminated in honoring (with its highest honor, the Richard J. Bogomolny National Service Award) one of my mentors and a lifelong role model, American composer and music advocate John Duffy. (And I do mean the entire weekend—the panels, plenary sessions, showcase performances, concerts, and awards ceremonies spanned early Friday morning to late Sunday night.) While there was no time to write over the weekend and on Monday (a national holiday) I was in no shape to string sentences together, I tried to the best of my time and ability to report on stuff as it happened via Twitter.) 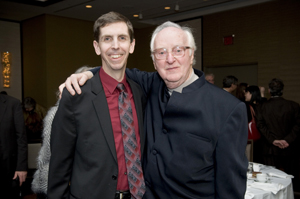 Although he has written over 300 compositions including operas, symphonic works, scores for films and television programs, and incidental theatre music, Duffy is perhaps most broadly known for being the founder of Meet The Composer. Aside from the fact that Meet The Composer is one of two organizations (the other being the American Music Center) that merged last year to form New Music USA (the umbrella under which NewMusicBox, and many other programs, now exist), MTC and John Duffy will always hold a special place in my heart. I was among the myriad composers who received support from MTC for premiere performances of my own music which might not have happened otherwise (since I was not on its staff, I was able to). At one point in my life, I worked for a firm that handled public relations for MTC and in so doing learned how much the organization contributed to the sea-change in the presence of contemporary music and its variety in the established classical music landscape. Duffy was one of the first people to decry the artificial lines between musical genres—famously declaring Charlie Parker’s alto saxophone improvisations to be music on par with the counterpoint of Johann Sebastian Bach. And the concept of a composer-in-residence is now pretty easy to grasp; before MTC, not so much.

But, above and beyond that, the persona of John Duffy made me realize that if you are a composer, your entire life is a composer residency. Everything we do as composers and how we interact with everyone in our community affects our field as a whole. On a personal note, Duffy has been among the most generous people I have ever met. Many years ago when he was moving and decided to get rid of his many LP recordings accumulated over decades (which was formidable), he learned that I was a vinyl obsessive so he actually gave me his entire collection. Acquiring these recordings was my introduction to lots of extraordinary repertoire including the symphonies of William Schuman and—believe it or not—the first recordings I ever heard of wind band music. Hearing these recordings, like everything else I got from knowing Duffy (corporeal and non-corporeal), broadened my mind and helped to open me up to the whole world of new American music which is something that needed to happen in order for me to do what I do now.

The entire 2012 Chamber Music America conference centered on advocacy and musical diversity, which is a tribute to the legacy of John Duffy. Often CMA’s Bogomolny awardees are honored with chamber music concerts highlighting their work. Duffy has only composed one chamber work to date (would that he would write more) so only that work was presented. But even if he had composed 66 string quartets (as did Joseph Haydn, a factoid the Attacca Quartet proclaimed during their showcase when they announced that they intend to record all of them someday), the only way to honor Duffy would be to play one of his pieces along with the music of others, since honoring him is ultimately about embracing all composers. So on CMA’s celebratory concert at Symphony Space entitled “Sounds American,” alongside Duffy’s composition, We Want Mark Twain, was the performance of a new work for oud and wind quintet by Palestinian-American Simon Shaheen performed by Shaheen with the Imani Winds, Cuban-American jazz pianist Martin Bejerano’s compositions for his own trio, and performances by the genre defying group Fieldwork of compositions by each of its three members: Vijay Iyer, Steve Lehman, and Tyshawn Sorey. 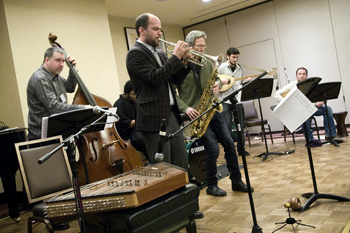 If that concert seems all over the map, the showcases went even further. I already mentioned the Attacca Quartet who before playing Haydn opened with a selection from John’s Book of Alleged Dances by John Adams–the provocatively titled “Toot Nipple.” Three brass quintets were on hand, among them the Gaudete Brass, 75% of whose showcase repertoire was by living Americans, and half of it by women composers. Then there was bassist Mario Pavone’s sextet whose pianist Peter Madsen blew my mind with his ability to make a fast tremolo ring out like a brass instrument, and Todd Marcus’s Quartet whose percussionist Eric Kennedy, even when comping the other players, carved out compelling melodies from striking all different areas of his various drums and cymbals. I was perhaps most balled over by Amir El-Saffar’s ensemble which navigated a musical realm somewhere between the traditional Iraqi maqams of his heritage with swinging jazz in charts he described as being “bitonal in the keys of F and B half flat”!

The panel discussions I attended—broaching subjects from using social media for audience connectivity to the future of recordings—spanned a similar broad reaching aesthetic, as did the two plenary sessions. The second, by Randy Cohen of Americans For the Arts, reaffirmed Duffy’s sentiments in how he tied the arts to society. He also introduced much of the audience, myself included, to the “shame flute”—a Medieval instrument that was clasped around the neck of bad musicians who were forced to parade around the town playing on it to humiliate them for the awful sounds they inflicted on their neighbors. I think we need to reclaim the instrument for new music. The first plenary, a talk by Aaron Dworkin, founder of the Sphinx Organization (which advocates for Black and Latino classical musicians), led me to a whole day of listening on Martin Luther King, Jr. Day instead of writing this report. Once again, it all goes back to John Duffy (except for the shame flute); it was a joy to see him so publicly acknowledged and honored for his commitment to all of us. 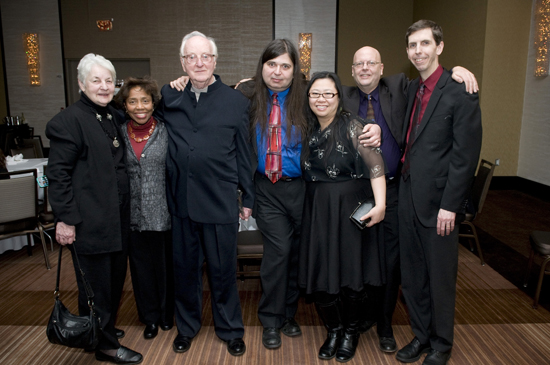