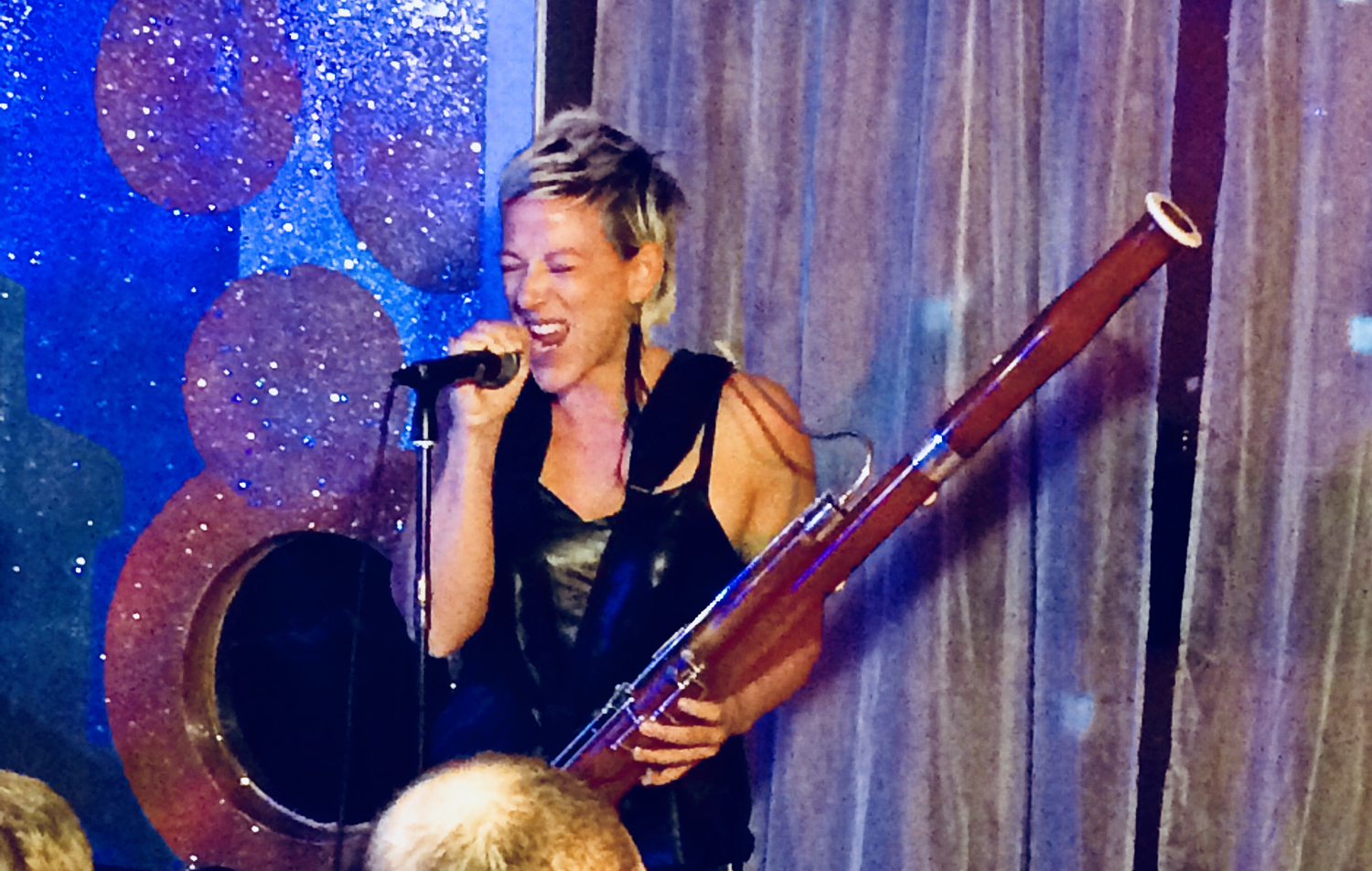 In 2009, as the newest member of the International Contemporary Ensemble, I was invited to perform my first solo show in New York City. I was excited, yet terrified of the daunting task in front of me: programming a solo bassoon concert. In a raw space. With no piano. AHHHHHHHH!

ICE had commissioned a new bassoon and electronics piece (by rising Mexican star Edgar Guzman) in my honor; but, beyond that, how could a person even begin to find such repertoire? Yes, there was the Luciano Berio Sequenza XII, the seemingly endless 18-minute solo marathon (for both bassoonist and audience) commissioned by the bassoon wizard Pascal Gallois. And yes, there were the Brazilian composer Francisco Mignone’s Waltzes(cute, overplayed solo ditties) and, of course, the intoxicating and sinewy lines of Olga Neuwirth’s Torsion. But beyond these, what new, interesting, exciting solo bassoon pieces existed?!

Very few, I discovered. Instead of stomping my feet in frustration or shrugging my shoulders in weary acceptance, I asked, “What can I do to change this?” Thus began a lifelong quest, in step (both artistically and practically) with my new position at ICE, to forge new relationships with composers in order to develop a new body of repertoire for the instrument, and in so doing, empower other musicians to do the same.

This spirit of adventure has always been at the heart of ICE’s mission to commission new music. Since our founding in 2001, we’ve premiered more than 800 new works. The beauty of our collective is that all 36 of us have incredibly unique and creative points of view, and each new project becomes imbued with those varied and diverse ideas. Deep collaborations, both among ourselves and with composers, ensure that these stories are told using a shared language we build and evolve together.

In an attempt to codify these methods of collaboration, we began ICELab in 2010. Through an online submission process, we chose six emerging composers each year from wildly diverse backgrounds—geographically, educationally, artistically—and gave them the space, time, and resources to experiment with performers before a piece was fully baked. We were inspired by theater and dance companies run by our peer groups (like The Troupe) and mentors (like The Wooster Group), and their spirit of radical collaboration in all parts of the process, from conception through performance. This kind of project, in ICE-land, had previously been impossible, as there was no method in place to fund this sort of musical experimentation. So, with crucial support from the Andrew W. Mellon Foundation, we embarked on this adventure.

The results were overwhelmingly, outrageously exciting! Through the application process, we were introduced to composers outside our network and with whom we began long-term collaborative relationships. To name just a few ICELab “graduates” who have continued their trajectories into major, industry-shaking careers: Tyshawn Sorey, Carla Kihlstedt, Anna Thorvaldsdottir, Suzanne Farrin, Zosha Di Castri, Marcos Balter, Du Yun (whose Pulitzer Prize-winning Angel’s Bone had its earliest premiere in the “lab”).

We turned ICElab from a noun into a verb.

In 2014, we turned ICElab from a noun into a verb, sun-setting the initiative as a standalone program and making it the DNA of how ICE works on every new piece. Every new work we make is now “labbed,” supported (through myriad, intentional fundraising efforts) from conception to performance. This allows us to have a period of time for each project in which composers and performers can experiment, play, record, and have the freedom to learn from one another. Because of this deeply collaborative process, pieces aren’t just written for the instruments involved; they’re written for the very specific, creative, and virtuosic members in our ranks.

My own ideas about how to create new work were developing alongside ICE’s commissioning process. By working with composers so closely within ICELab, I was able to see and understand how I was directly responsible for certain impulses and directions in projects—not only within the sonic world of the bassoon, but in the overall shaping of a work. It was thrilling!

The thrill and the risks both felt amplified when working alone. Commissioning solo pieces means lots of intense one-on-one collaboration, and true collaboration, I found, is hard and SCARY; it requires all parties to be extremely vulnerable and open. After the agony of programming my solo show in 2008, I began in earnest to commission the works that would make up my first album, 100 names, released in 2013. On speaking a hundred names (for bassoon and live electronics)—the piece by Nathan Davis after which I named my album—was my first such journey. Nathan works in a fascinating way. He gets his hands on an instrument and starts learning it; he’s deeply interested in the sounds that will come out in the hands of a beginner. On the bassoon, that happens to be multiphonics. ANY multiphonic. Fun fact: on a bassoon, it’s way easier to produce a multiphonic than it is to produce a single beautiful tone. So easy, in fact, that Nathan composed an entire section devoted to a gorgeous, deafening cacophony of many-layered bassoon multiphonics, serving as the climax of the piece that we jokingly refer to as DEVASTATION.

Never say “that’s not possible” or even “no” without really trying (and failing) myriad times.

When working with a composer, it’s so easy to claim authority on your instrument and dictate the limitations and technical boundaries that the composer has to work within. Nathan asked me to try some things that I was convinced I could not do, those that I said were IMPOSSIBLE on the bassoon. It’s easy to respond this way—immediately saying NO—out of the fear of looking stupid or untalented, because everyone else has told you it’s impossible, or because you’ve never been able to do it. But if there’s one thing I’ve learned over the years, it’s to never say “that’s not possible” or even “no,” without really, really being open to trying (and failing) myriad times. Because of Nathan, his patient insistence, and our trust in one another as collaborators, I often wail out in performance on an “impossible” high A-flat; teeth on the reed, hips thrust out, goddess above treble clef.

The exhilarating feeling of performing new works, created collaboratively, is magnified a thousand-fold when a piece develops a life of its own. I’m especially thrilled to welcome into the world Metafagote (the title track of my second album), an epic, 18-minute work (eat your heart out, Mr. Berio!) by Felipe Lara for solo bassoon and six pre-recorded bassoons and contrabassoons, or for a live choir of seven bassoons.

Not only have I performed both versions of the piece, but several other players have already taken it on. One particularly ambitious and talented young bassoonist, Clifton Guidry at Peabody, is performing it on his senior recital next weekend, and allowing me the immense pleasure of playing in his back-up band. This is SO brave! It is a risk to interpret someone else’s work, and I applaud Clifton and his willingness to be so open and so vulnerable and jump off this musical cliff with me and Felipe and his other collaborators.

Exploration and collaboration are inherently risky…

Exploration and collaboration are inherently risky, but the rewards are so clear. Not only can a deeply personal piece turn into a powerful universal experience, one that can be interpreted by any willing explorer, the process itself becomes a mighty teacher. I’ve become a much better musician thanks to my musical deep dives, within the ICE collective and beyond.

My great hope is that we continue to inspire one another, performing and commissioning new works together, so the next generation’s young artists, faced with programming their first big show, will be overwhelmed by a beautiful, varied, unique, and multi-faceted new repertoire, overflowing with the diverse voices of a movement fed up with waiting for someone else to do it for them.