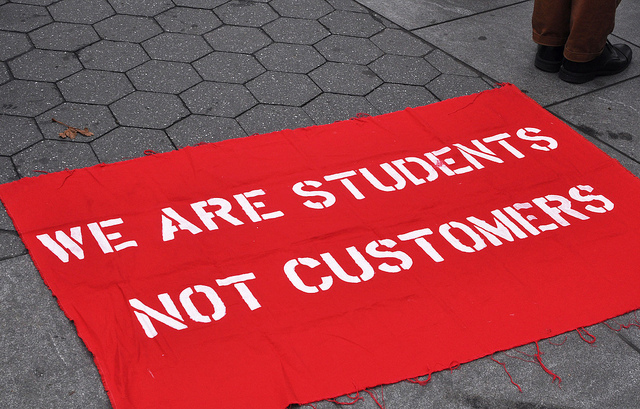 It’s no secret that there’s a student loan crisis in the United States. Americans now owe a full $1.2 trillion in student debt, and that number is only expected to increase.

It’s also no secret that this crisis impacts the music community. I know more than a few gifted musicians and composers who’ve had to ask themselves, “Do I keep working on music, or do I find another more lucrative kind of employment that will allow me to pay down my educational loans?”

At the same time, Future of Music Coalition’s research indicates that investment in education can have some clear benefits for careers in music. In 2012, as part of our Artist Revenue Streams research project measuring the ways that musicians and composers make a living, our research team crunched the numbers from a large-scale online survey completed by over 5,300 US-based musicians. Among our findings: conservatory and music school graduates were likely to be earning more and working more than non-music school graduates. 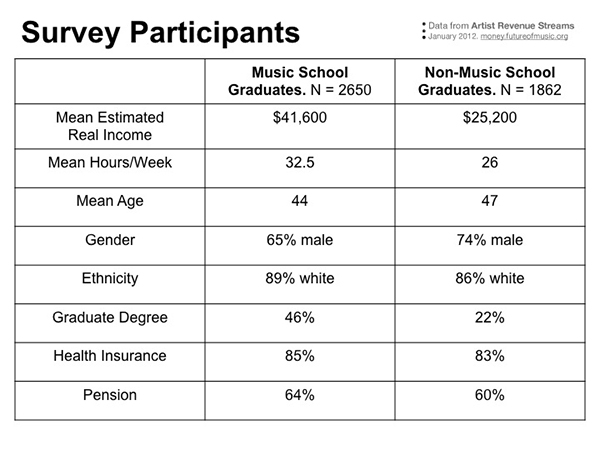 Thus, it’s important that students be given the tools to make informed choices and understand the full range of potential risks and rewards that investment in education may represent. The most responsible schools are increasingly giving students a candid assessment of what the job marketplace looks like before they get too far into their educational career, and some are working to better equip their students with entrepreneurial skills to navigate a challenging landscape.

Yet, as Ellen McSweeney points out in her excellent 2013 article about education debt for NewMusicBox, entrepreneurship itself depends on a degree of financial flexibility that many young graduates don’t have. Her article is a strong resource for thinking through the tough decisions young composers and musicians face in planning their educational and vocational paths. It’s got some hard-won advice from twenty-something musicians and composers in the process of paying off their educational debt.

It’s also likely that the current student loan crisis has other trickle-down effects for arts participation more generally, particularly on the audience spending side of the equation. Arts organizations are constantly experimenting with new initiatives to try and attract younger audiences, yet as recent graduates in all fields are more burdened with debt than ever before, they may opt for fewer, less adventurous, and less expensive entertainment options. Even sharply discounted symphony tickets can feel like an indulgence that’s hard to justify when you’ve got a $500 monthly student loan bill.

So regardless of whether they’re personally saddled with debt, this is an issue that could impact all musicians and composers. Thus, it’s worth keeping track of some things that have been happening in the broader policy conversation around student debt.

The Debt Collective, an activist group that began as an offshoot of Occupy Wall Street, has been taking a unique approach to the issue. By buying up aggregated educational debt from lenders for pennies on the dollar, then abolishing the debt rather than collecting it, they’ve drawn attention to the incoherence of the present state of affairs. More recently, they’ve organized a group of more than 100 students who attended the for-profit Corinthian Colleges or their subsidiaries and who have refused to pay their federal loans in protest of predatory practices, asking the Department of Education to discharge their loans.

For-profit schools have been targeted because they account for a disproportionate amount of defaulting borrowers, and often have poor retention rates and high debt loads; the worst are accused of predatory lending practices and deliberately recruiting vulnerable low-income students. Indeed, earlier this month, the Department of Education fined Corinthian Colleges $30 million for misrepresenting job placement rates to current and prospective students, among other misdeeds, and today the company will shut down its remaining campuses.

Over the past few years, we’ve seen some modest but meaningful reforms and increased federal oversight. Borrowers can now choose repayment plans that take current levels of income into account when assessing monthly loan payment amounts. For those enrolled in these “income-driven repayment plans,” if their income is low enough, they could have a monthly payment of $0 and still be considered current on their loan payments. (For full-time employees of non-profit organizations, the entire federal loan can even be forgiven after ten years.) Yet while the Obama administration has expanded access to these plans, enrollment is still low, and these plans can’t do anything to address private student loans, which can have the worst interest rates. Senator Elizabeth Warren has again introduced legislation allowing borrowers to refinance older loans at current lower rates.

But why not think bigger—like encouraging state reinvestment in higher education with a goal of making college much more affordable and decreasing reliance on loans? With the 2016 elections on the horizon, it’s a good time to speak up about these issues and make sure that they’re on the table for consideration.