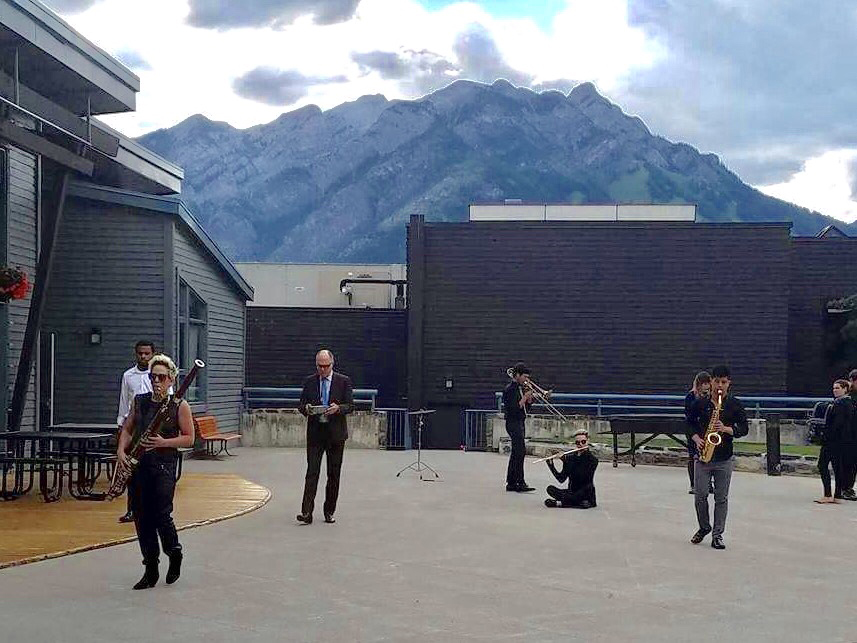 It was 2002, and, looking for a summer festival that was a little different, I entered the the Banff Centre’s Masterclass program to study with famed bassoonist Stephen Maxym. At 87, this ended up being his last year teaching, as he passed away just a few months later. I was so thrilled by him — his knowledge and his generosity of spirit — I still feel lucky to have known him even for such a short time. I had come to bask in his wealth of knowledge, eager to enrich my own musical life with a renewed sense of focus and purpose. But I didn’t just want to siphon off his ideas and keep them to myself. I wanted to find a community at Banff: a mutually encouraging group of bassoonists and other instrumentalists, a collective of new friends with whom I could share secrets, tips and joys as we deepened our musical practice together in this beautiful place.

What I found instead was a shockingly dull and simple program of one masterclass a day, where all of us—at least a dozen bassoonists—were repeatedly left waiting for our chance to play, feeling a forced sense of competition for the attention and time of this great teacher. It felt like such a missed opportunity. There I was, surrounded by incredible musicians in one of the most beautiful places I’d ever been, and what I was feeling was not a sense of renewed creative energy, but its opposite. I was bored. All that creativity, all that vibrancy! It felt like such a waste.

I wanted to make more chamber music. I wanted to be pushed into exploring unfamiliar repertoire. And most importantly, I wanted to feel that I was doing so with friends and co-conspirators, building each other up, building something new — not fighting for time, recognition and airspace.

Maybe I had picked the wrong summer program. Or maybe the problem ran deeper than that.

Institutions seem actually to be getting in the way of curious young artists.

I had experienced the same thing in my conservatory years, and it’s still something I see today, running through the fabric of most academic institutions and orchestral training programs. I’ve had hours of conversations with young people, inside those institutions now, who feel it too. There’s an unhealthy sense of competition among the musicians: a feeling that students are all fighting for a limited number of spots in a shrinking field. But it’s more than that. In their determination to force young musicians down the well-carved orchestral or academic grooves, institutions seem actually to be getting in the way of young artists curious to explore alternative ways of existing as dynamic and creative artists.

How do we move towards a more open, more loving, more supportive environment — one that fosters networks of support among artists and incentivizes collaborative creation? What if an intensive summer program were actively designed to nourish this sort of community? How might that vision radiate outward into broader institutional culture?

Enter Ensemble Evolution, the International Contemporary Ensemble (ICE)’s attempt to build such a summer festival at Banff Centre for Arts & Creativity. The goal of Ensemble Evolution is to provide a haven from the shortsighted rigor of practicing the same excerpts and etudes ad nauseam, or performing the same rep over and over, by building a safe place for participants to follow their inner creative compasses, however outrageous or genre-busting those impulses might be. Co-artistic directors Claire Chase (ICE founder) and Steven Schick (longtime ICE collaborator) have designed a program that foregrounds support, inclusion, love and “git-er-done-ness” to empower young artists to dig deep, explore, and support one another as they build work together. The program is about to enter its second three-week season, shaped by feedback from participants and faculty who worked together on the program last summer.

Ensemble Evolution is a place for young artists who aren’t interested in being treated like precious commodities. It’s a community for players who want to become more complete artists by creating work with one another, from the ground up. It’s a place where participants can come as their whole, complicated, dynamically talented selves and take a deep dive into the music that makes them feel most alive and most themselves, in a community of supportive artists engaged in the same brave soul-searching.

But this creative discovery can’t happen through contemplation alone. At Ensemble Evolution, young artists are put to work. The first week is fully scheduled: this year players will be performing, side-by-side, brand new pieces written for the occasion by George Lewis, Sabrina Schroeder, Peter Evans, Matana Roberts, and Vivian Fung, among others. Composer participants will be writing new works for their peers. Through a rigorous schedule of musical practice in this first week, including daily 7:00 a.m. hikes in the Canadian Rockies, participants will get to know and trust each other as they move towards curating and producing their own events and concerts in weeks 2 and 3. ICE, as faculty, will be on hand to coach and guide, but every aspect of making the concerts happen is left in the hands of the participants.

Ensemble Evolution is the program I wish I had found at Banff in 2002. It is a dedicated space for artists to seek deep artistic fulfilment in full acknowledgment of the challenges of such a quest — the blurring of genre lines, the carving out of new career paths. It’s an intensive summer festival that strives to help younger artists find, more rapidly and with more confidence than they might otherwise, a place in the world that makes them feel creatively whole. But there’s nothing utopian about Ensemble Evolution. It confronts the pressures faced by practicing artists head-on.

I’ve had many obstacles in my path, as I outlined in my first NewMusicBox post, and I expect many more to come. All of us in ICE have learned hard lessons along the way. At Ensemble Evolution, we share these lessons with young artists with the aim of making the path to creative fulfilment less fraught than it already inevitably is. We invite participants to get closer to every part of the creation process in the hopes that they’ll come closer to realizing their dreams, however outrageous (or, indeed, traditional) those dreams may be.

The most amazing part of last summer, for me, was the amount I learned from the incredible participants. One such musician, Composer Camila Agosto, was already in our midst through her sheer ingenuity and bravery. In 2016, while still an undergraduate student, she submitted information about works to ICEcommons, ICE’s free online database of works by emerging composers. ICE members discovered and subsequently performed Agosto’s music, and we were all blown away by her distinctive voice and vision — rare for a composer so young.

Camila went on to participate in Ensemble Evolution in 2017, and found that her experience has had a deep impact on her musical practice. “The fact that I have been able to cultivate collaborative relationships that were built from the seeds of creative exploration at Banff has allowed me to develop so many projects that are being performed in various venues around the country, exposing our work to the greater music community.”

For bassoonist Ben Roidl-Ward, participating in Ensemble Evolution was mind expanding, and provided an incredible opening to new experiences and possibilities. Not only did he help run the shows, deeply involved in all aspects of producing insane marathons of music for himself and his peers, he performed an incredible amount of music, self-curated and self-produced. I asked him what his last day consisted of and he said “That day, I played iPhone, strobe tuner, and bassoon. I played pieces by Biber, Villa-Lobos, Pauline Oliveros, Anna Heflin, Jordon Morton – none of it assigned. This was all music I discovered in those three amazing weeks.”

The future of music will be built, from the ground up, by the young artists of today.

The future of music isn’t a decision that will be made by institutions, by donors, or even by established artists. It’s a reality that will be built, from the ground up, by the young artists of today. We are rolling up our sleeves and getting ready to help with the heavy lifting. Through creating, learning together, trusting one another, cultivating curiosity and critical thought, and bringing unique voices to the stage (via the mountaintop), the young artists about to enter into the second season of Ensemble Evolution will change the musical landscape for us all.