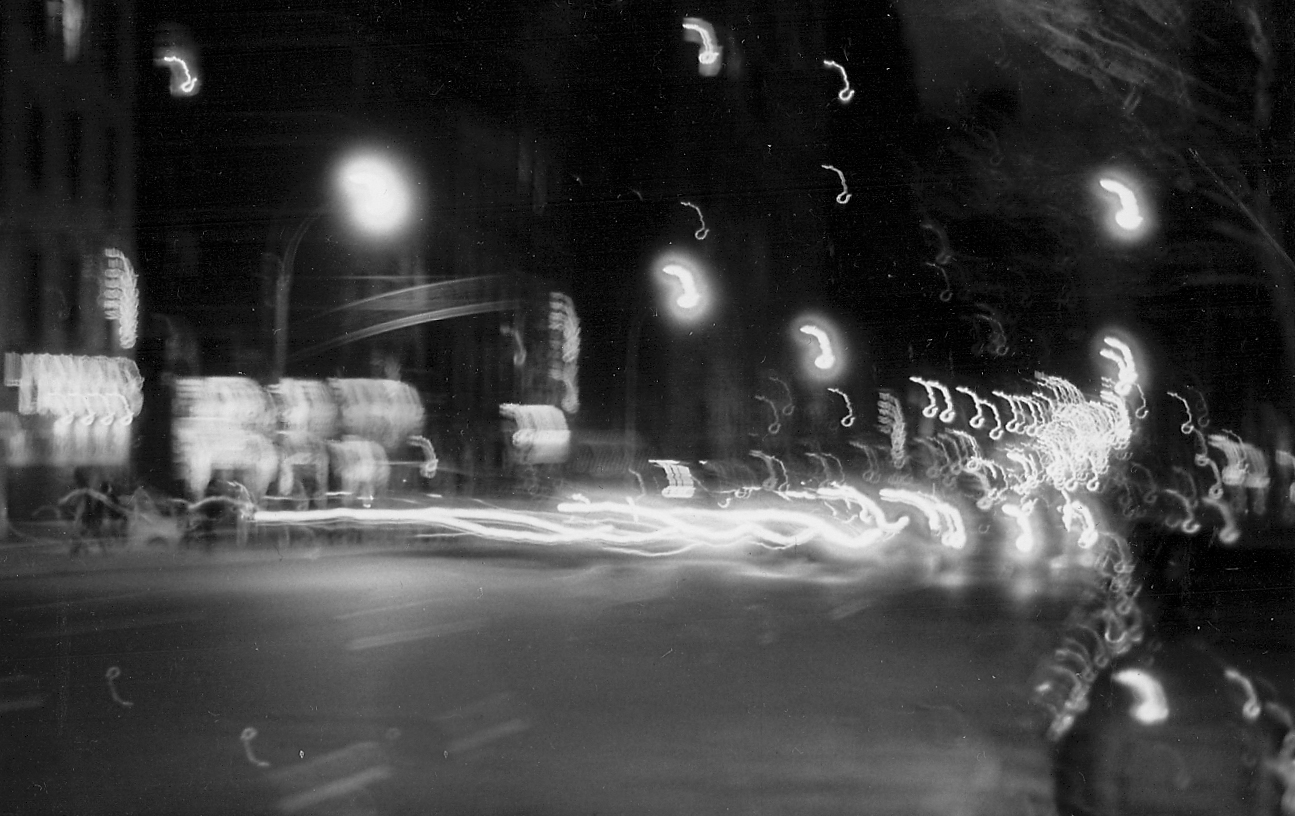 What does it mean to live a musical life? How has my perspective as a dedicated musician shaped my experience of the world? How does that manifest in my life and music?

The idea that movement suggests music is an influence from my study of Dalcroze Eurhythmics, as is my interest in rhythmic flow—how to create momentum, and let it subside. And so sometimes life can seem to be a vast counterpoint.  And it can blur the edge between the quotidian and the musical while, at times, they become one.

The counterpoint of life is omnipresent.

Art imitates life, or life imitates art. Which is it?  Both/and? The chicken or the egg…? Looking at life through a musical lens, I see many correspondences that are perhaps easier to see in a city like New York, where the counterpoint of life is omnipresent.

Rush hour between Port Authority and Grand Central is a corridor of music – live, vibrating along subway passageways, on the platforms, or on the trains. Music pairs with the clatter and screech, the footsteps, the travelers, the dancerly crossings and those who come too close during rush hour when so many people are trying to get somewhere else. Then you’re walking through a corridor and hear a drumbeat. Rounding the corner, you see the drummer, Ah!  He drums you through the turnstile and gives you something you didn’t even know you’d needed.

The music fades as you walk away and seems to disappear, but it lingers in your head and pairs with your surroundings, the conversations in polyglot rhythms, the varied paces of the stream of travelers, each with their own tempo, weaving and tacking through the crowd.  Movement is music. Having improvised for a walk as I did in my Dalcroze days, I’m noticing the differing gates and the movement of weight. I weave my own line into the counterpoint as I move through the crowded platform, humming a vamping bass. 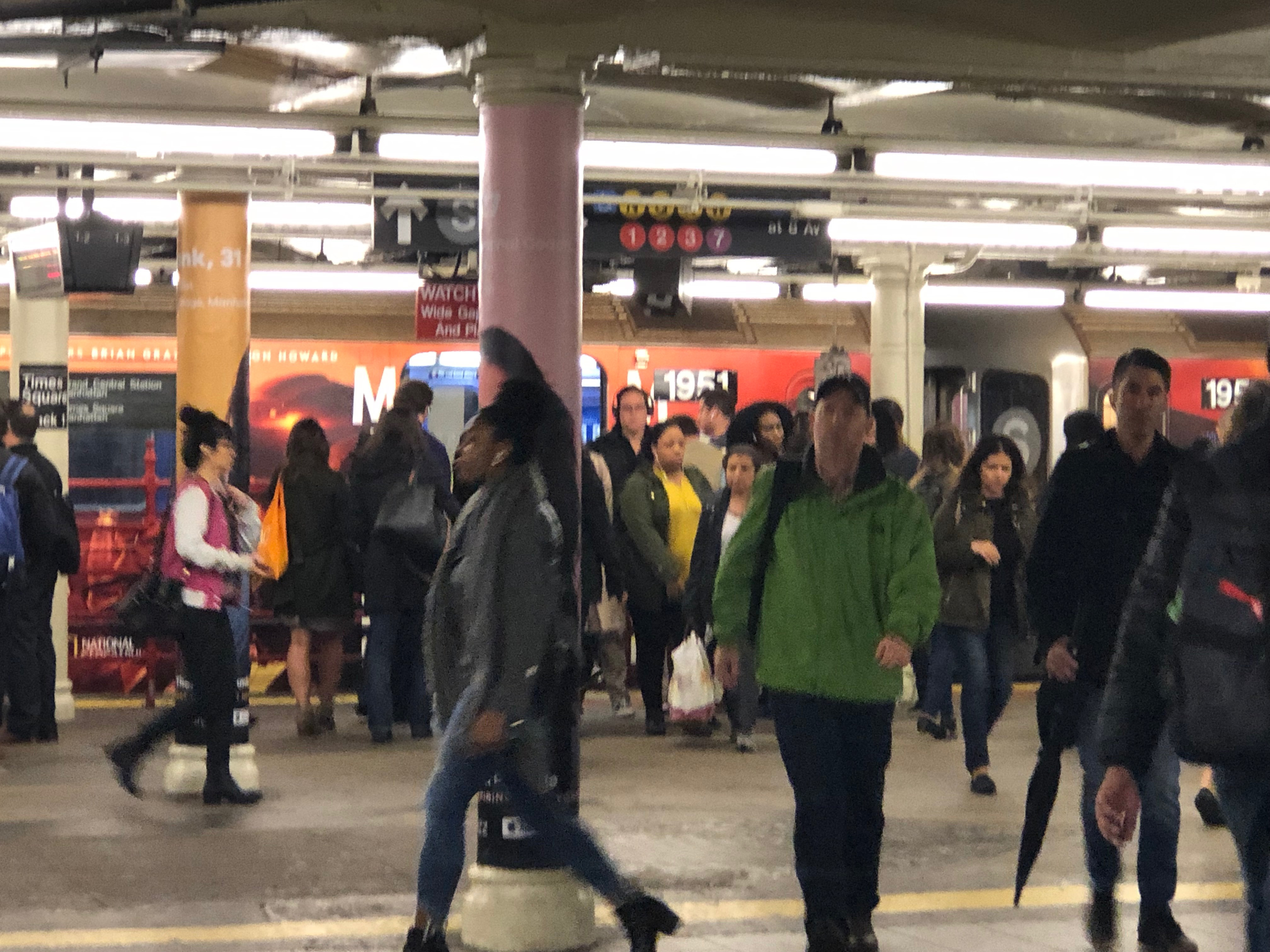 Walking home one night, I discover an Indian restaurant on Amsterdam Avenue. Turns out it’s good food but nearly empty due to delivery apps and the like, so I had the place to myself.  Soft Indian classical music in my ears, I order.  Waiting for the food, I’m looking out the window, sipping a glass of wine. It’s a charcoal black night lit by the storefronts across the way, the passing yellow cabs amid the vehicle sea, a colorful array of red, yellow, and white neon.  As I’m watching, I start to notice that there’s something more. Cars are going both ways on one-way Amsterdam Avenue.  Everything seems much busier!  Twice as busy in fact.  Comings and goings. Looking to my right, I notice the large mirror covering the entire wall of the restaurant.  These are mirror images; I’m watching contrary motion in practice!

There are various rates of flow.

There’s the direction – the coming towards, crossing at the center line, then moving away like partners in a dual, disappearing into the vanishing point.  There are various rates of flow. Cabs are the fastest, darting to the light, while cars and trucks may saunter.  Eventually, I see that the cab goes through an equal deceleration at the other end, accelerando and ritard referring back to their opposite.  The saunterers, whose speeds are less varied, bring an amazing but ordered complexity to the scene.  And then there are the people. Walking at a steady pace, self approaches self and departs from self.  If that’s not counterpoint, what is? 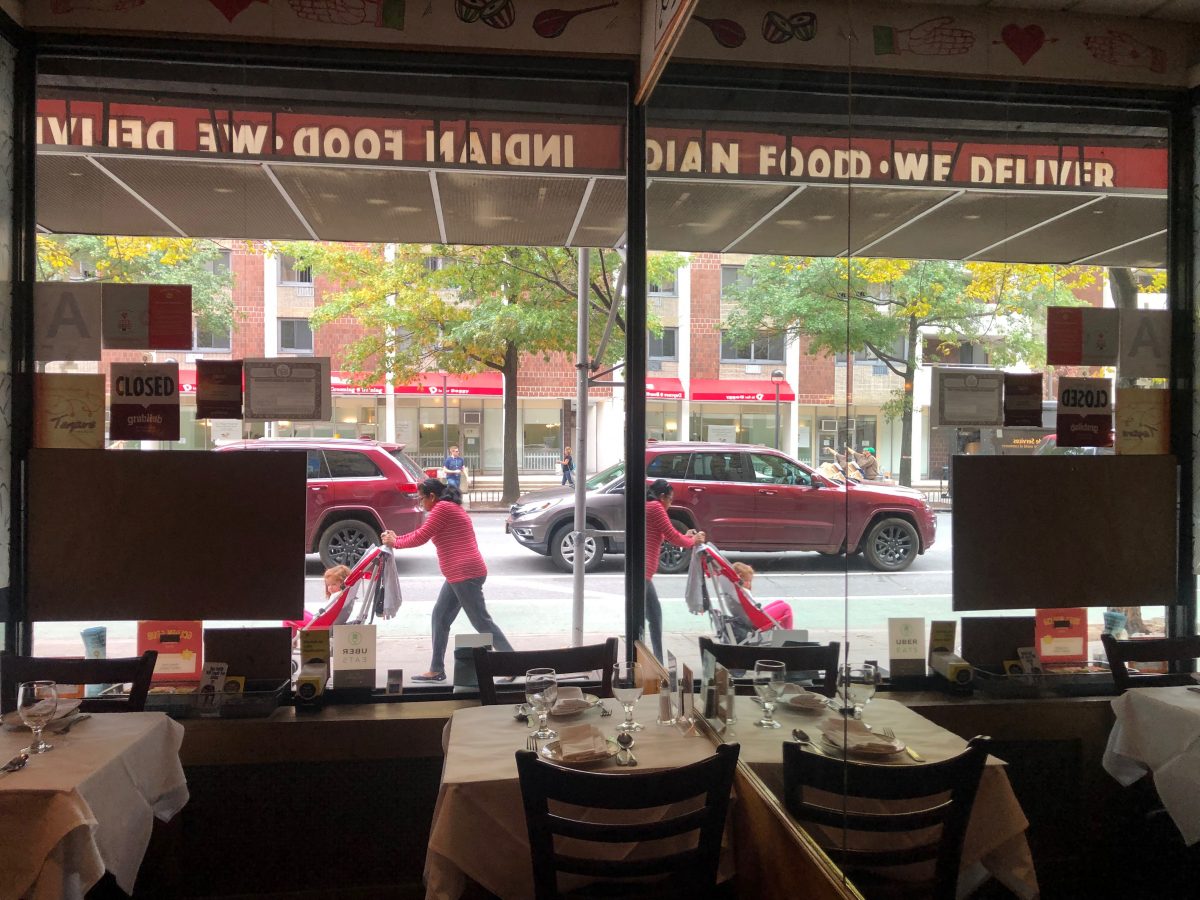 Contrary motion and variable rates of flow observed from an upper west side Indian restaurant.

My mentor lives at the West 86th Street subway stop.  When it’s cold outside, I take the subway home from her apartment. Waiting for the train, I hear Bernstein—“There’s a place for us…” The train across the platform is leaving the station, and that’s its song. A perfect Bernstein tribute, though unplanned.

I turn on the electric tooth brush in the morning; it sings C.  I join in humming “om” as it does its work. 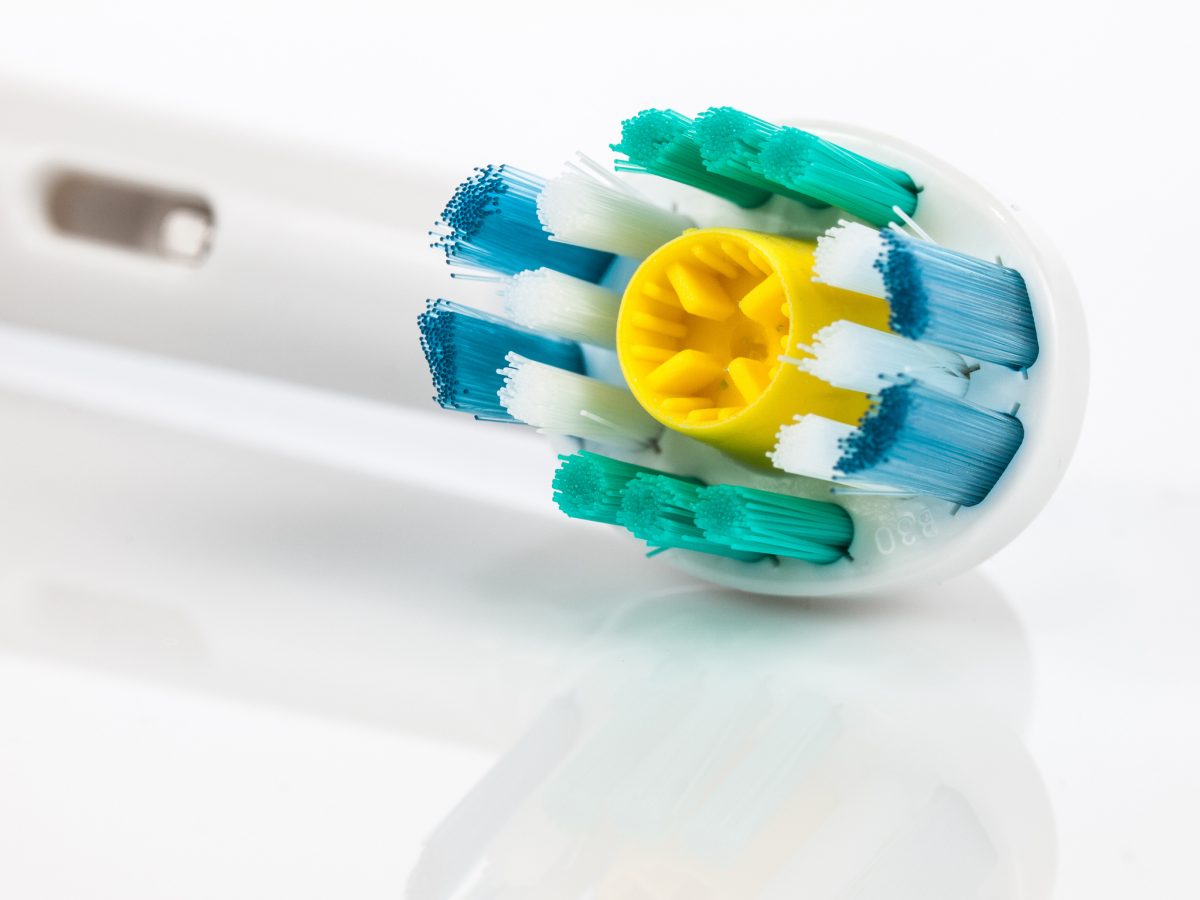 My dancer friend tells me that she experiences everything in terms of phrase—waiting at a stop light, walking through a department store. Her years of dancing have given her an internal phrase clock. Sometimes it goes on in the background, but it’s always there.

Sometimes I swim in phrases, holding my breath longer to lengthen the phrase.  My mother once told me that she learned to swim in 6/8 time, three kicks to each arm stroke.  When I tried it, it propelled me through the water with much less effort. I tried it walking up the steps, it helped there too!  This must be the most efficient use of energy? A connection with the three-part beat of swing and the indigenous rhythms of African drumming and of original life? 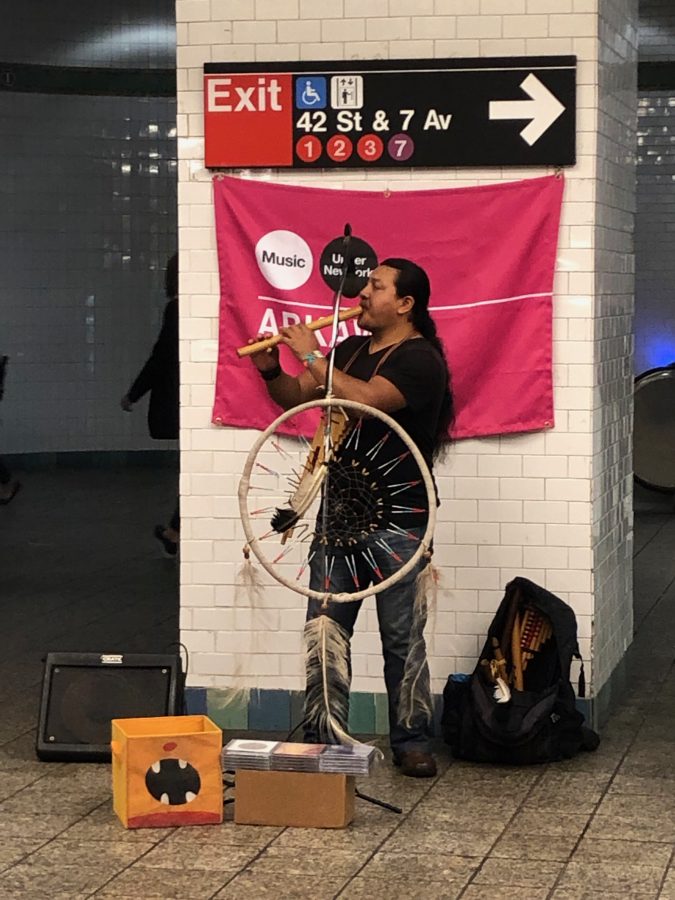 A lone subway musician at Times Square, but his music is just one layer of the sonic landscape there. 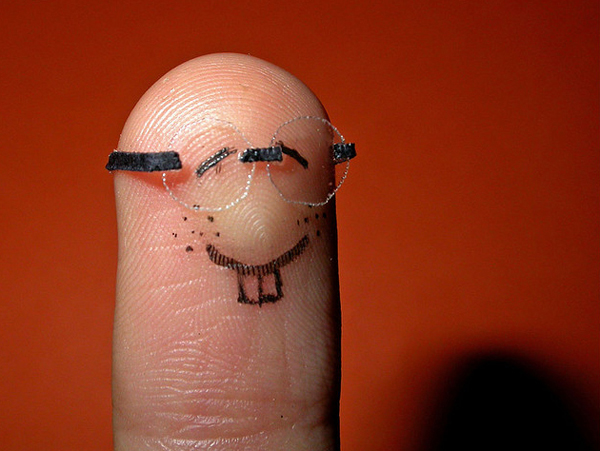 They say you should write about what you know.

Recently, I have taken this completely to heart in a series of new compositions on “nerd culture” topics. These pieces include: Visionary, a short tribute to Steve Jobs; Small Messages, which is based upon the structure of a tweet; and, most overtly, Nerd Songs, a collection of five songs on nerdy topics from my 1980s upbringing.


It isn’t coincidental that I am writing these works at the same time that nerd culture has taken off. Thanks to the success of the television show The Big Bang Theory—not to mention America’s recent obsession with Doctor Who, Marvel comics, Lord of the Rings, and other topics that come straight from my childhood—it seemed like a no-brainer for me to write music echoing these trends. After all, since it is clear I am not the only person who is interested in all of this, it might stand to reason that this could be a way to tap into a new market that might not be fully aware of new classical music.

Growing up, I was ashamed of being a nerd. This was pretty typical. After all, at the time being labeled a nerd was considered about as bad as showing up to school in nothing but your underwear. It invited ridicule and—at times—bullying. Living through the ’80s, you simply didn’t advertise that you would prefer to spend your free time playing a computer game, obsessing over Star Trek, or reading a comic book.

Those were tough years for me.

Having spent the late ’80s as a social outcast, I spent most of my early teen years working diligently at concealing the fact that I was a nerd. Fortunately for me, I had a proverbial ace up my sleeve. It was in 1987 that I first took up the saxophone, and by the early ’90s I was no longer known by my peers as a nerd, but rather a music nerd! At most schools this wouldn’t have been much better, but I also had the good fortune of attending a performing arts school, the San Diego School of Creative and Performing Arts. This meant that my “music nerd” status was in fact one that garnered popularity among my peers, rather than derision.
I spent these next few years in a more-or-less socially accepted state, embracing my music side while forever concealing the nerd. Those whom I socialized with knew that I loved music, that I had started to compose, and that I was more than likely going to pursue music at the collegiate level. Few were aware that, beneath this all, lurked the heart of a true Trekkie-computer-programming-comic-book-collecting-video-game-obsessed geek. Those friends that did know shared similar interests and—not surprisingly—also worked to conceal these same interests.

Of course, times have changed. Today, being a nerd is no longer a label to be feared. It is, in fact, now a badge to be worn proudly by all of us who still obsess over whether or not Han Solo fired first, if Deep Space Nine will ever be recognized as the truly great television show that it was, or if there will ever be a decent Fantastic Four movie. This dramatic change in culture started about a decade ago, which not surprisingly coincided with my own coming of age, when I finally stopped hiding and embraced my nerd side. I am 100% sure that I was not the only nerd in hiding out there, and that we all finally grew up. And took over.
So, it isn’t by chance that I have composed works that celebrate nerd culture. Nor is this a gimmick that I am trying to exploit. This is me, making a conscious decision to write about what I know, with the hope of bringing that music back to my roots so that it can speak to all those who have similar, nerdy interests.

Which makes me wonder: new music at a Comic-Con, anyone?