“It’s always now,” exclaimed Maia McCormick, our summer intern at New Music USA, during a conversation I had with her during her last week with us. (She’s now on a brief vacation with her family and then will be heading back to school.)
“That’s both incredibly obvious and extremely poignant,” I retorted.

All of us, not just those of us who are involved with music, waste so much time dwelling on the past as well as trying to predict what the future is, when in fact, the only thing we can really affect is the present. In that sense visual art, such as paintings and sculptures, might be the most effective artistic medium since they can be experienced all at once and the reality of the perpetual present is never lost in the process. While it’s true that the longer you look at something the more details you potentially will become cognizant of (and hopefully appreciative of), it’s all there for you to interact with as quickly or as slowly as you desire. Well, not completely. Having been ushered out of a museum at closing time while not sufficiently sated with looking at a painting is something some of you might have experienced. Most of the time I look at art works in a museum all too quickly, fearing that if I don’t, I won’t be able to see everything there. This is especially the case when I travel, since who knows when or if I’ll ever get to visit that museum again.

Music, on the other hand, carries with it is a constant reminder of the past and the future, since music needs to be mentally processed temporally on its own clock. If we were to listen to a piece of music faster than it is meant to occur—and admittedly recordings of performances can be sped up—we would obviously not be getting the same experience as listening to the music at its intended speed. Similarly, if we slowed it down it would also be completely different. The various experiments from a few years back of slowing down Beethoven symphonies and various Top 40 pop songs inspired new pieces of music, not new ways of hearing pre-existing ones.

Requisite time allotment is not the exclusive domain of music. All the performing arts—dance, theatre, mime, etc.—require audiences to follow someone else’s clock as does cinema. But poetry and prose fiction exist in a realm that is something of a middle ground between the way we take in the visual and the performing arts. While we cannot read a poem or a novel all at once, we turn the pages at our own pace and can constantly reread a baffling or favorite sentence again and again before moving on, or jump to the end and spoil the plot if we are too impatient. Although there have been intentional disruptions to the arbitrary directedness of the literary line for centuries (such disparate phenomena as acrostic poetry, Laurence Sterne’s antinovel The Life and Opinions of Tristram Shandy, Gentleman or even Medieval illuminated manuscripts and the Talmud immediately come to mind), non-linear literature has mostly remained a somewhat arcane endeavor. 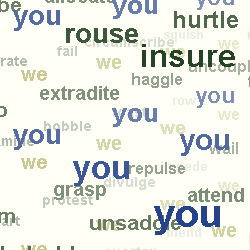 An “excerpt” from Dan Waber and Jason Pimble’s hypertext I, You, We. Reprinted in accordance with their Creative Commons license.

Much to my delight I recently stumbled upon Dan Waber and Jason Pimble’s 2005 hypertext I, You, We which presents a fascinating alterative to a static text that is meant to be read in one direction; in it, words are constantly moving (though they can be stopped or shifted in direction via clicking and dragging) but they ultimately go nowhere. Yet this text does not completely abandon meaning—all of the words that race across the screen are comprehensible to anyone fluent in the English language. Such a piece of verbal art aspires to the condition of music. However, it most clearly resembles music that eschews functional tonality, since any music with a developed syntax of functionality would need to have a clear beginning as well as a resolved ending.

What if there could be a piece of music that was equally open-ended and still meant something to listeners? I’m reminded again of some of the more recent compositions of John Luther Adams such as the outdoor percussion extravaganza Inuksuit which it is impossible to hear all of, or the sound installation The Place Where You Go To Listen in which every pitch and rhythmic element carries a great deal of meaning, yet it continually morphs based on the weather patterns of the day. Might these sorts of musical structures more accurately reflect a world in which the past and the future are mental constructs and the only thing that is really tangible is the here and now?