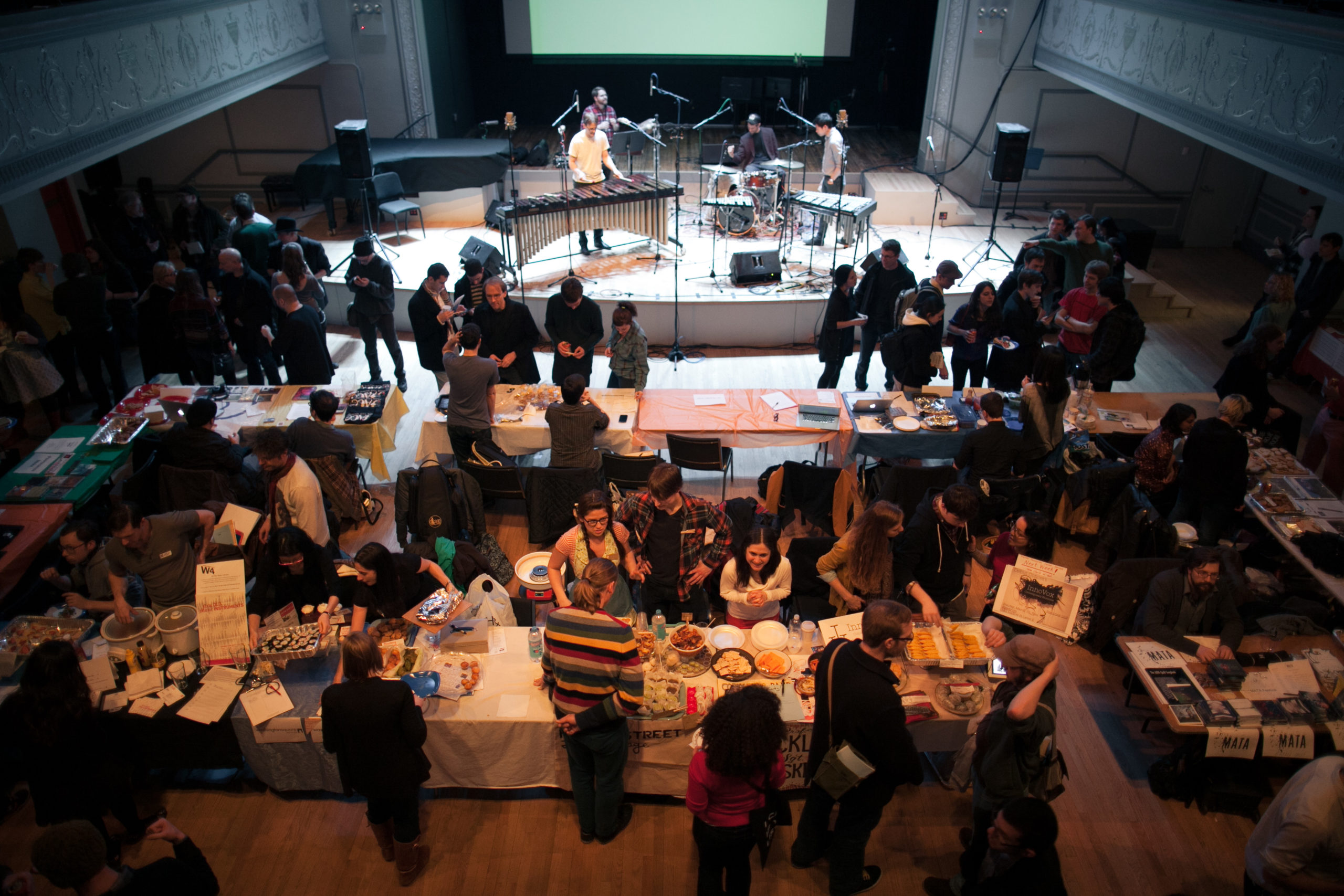 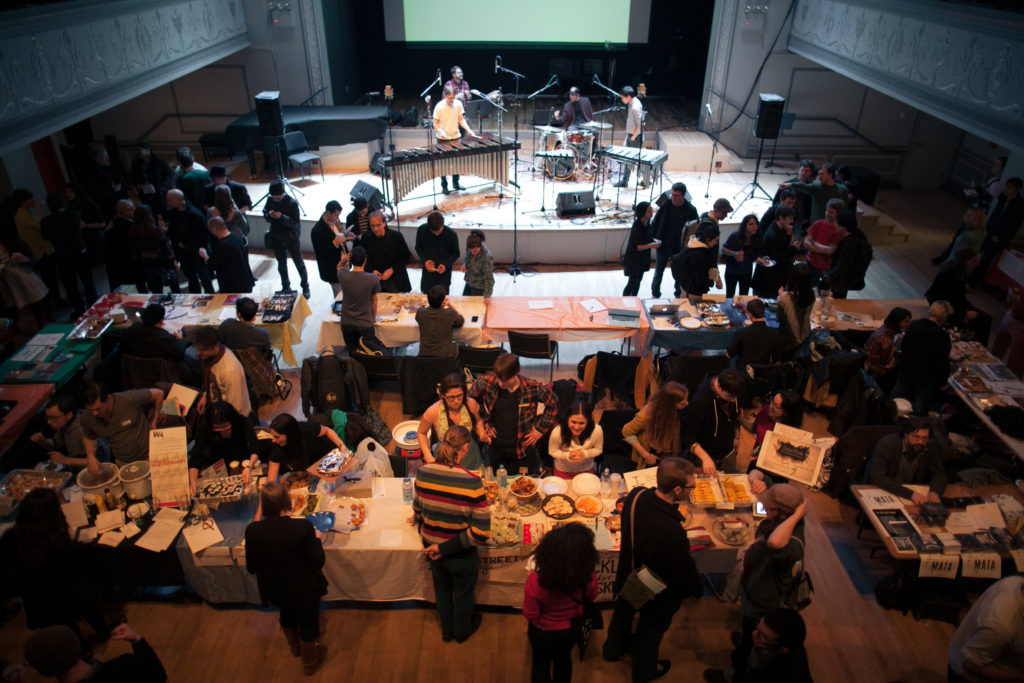 The New Music Bake Sale has been a staple of both New York City’s new music community and of cookies, brownies, and the occasional dumpling, for more than five years. This year’s event is taking place on March 15 from 4-11 p.m. at Roulette. Tickets are $10, and inside you can visit the tables of dozens of ensembles and organizations, hear their music on a playlist throughout the event, and eat their baked goods.

The event has become a real tradition, and provides a real hub through which new and established members of the new music community can connect. That’s why this year New Music USA is proud to be once again the lead sponsor of the New Music Bake Sale.

Every hour, on the hour, live performances will happen on Roulette’s stage:

Can’t make it in person? The Bake Sale has made a Soundcloud playlist of music from the performers selling baked goods during the event. As more music comes in, more tracks will be added to the playlist through the date of the Bake Sale itself:

This has been a dense couple of weeks for new music concerts in Los Angeles. A coincidence of timing (or is it?) means that LA Phil’s Brooklyn Festival overlaps with two Southern California-themed festivals, Hear Now and The LA Composers Project. The temptation to make direct comparisons between the Brooklyn and LA scenes is huge, and Mark Swed of the LA Times took the bait, sort of, though he (perhaps wisely) stopped short of drawing any real conclusions. For my part, I feel far too personally invested in what’s happening here to be even remotely objective about it.

One recurring question that my friends and colleagues keep asking, though, is “Why did the LA Phil feel the need to import a bunch of composers from New York when there are so many great composers here?” It’s hard for me to come up with a good answer—or rather, I can think of many possible answers, some of them exceedingly cynical. But the most succinct one I can think of is “infrastructure.” I can think of more than a few new music ensembles and festivals (MATA Festival, Bang on a Can, etc.) that started out scrappy in the 80s or 90s and have now become fairly established. Anything comparable in LA has come about more recently, so the infrastructure is about 20-30 years behind. So there’s a kind of system in place that helps New York-based composers get their work known and propagated, and there’s nothing comparable here (at the moment). It also means that, for better or for worse, there’s a New York composer “brand,” so that when you hear the phrase “New York composer” a certain sound immediately comes to mind.

This is a blessing and a curse, and I think it often results in New York-based new music being unfairly maligned as being rather homogenous. This was on my mind at last Tuesday’s LA Phil concert, which featured works by Samuel Carl Adams, Matt Marks, and Tyondai Braxton. This program was anything but homogenous.

Adams’s Tension Studies was an exercise in restraint and implication. The version presented was for guitar, two percussionists, and electronics, though there are a few variations of this piece floating around the internet with slightly different instrumentations. (I wonder why Adams keeps tinkering with it.) In all versions, though, the piece is sparsely populated, with guitar and percussion playing plaintive, bending notes and chords while gorgeous electronic textures fade in and out. It’s easy to read this piece as ambient, though the gulfs of near-silence and subtle interlocking rhythms suggest something else to me, like the shape of a building suggested by an unfinished construction site. For all its outward calm, there is an undercurrent of something more unsettled. The overall effect is mesmerizing.

Matt Marks’s pop-operatic Strip Mall also felt suggestively incomplete, though perhaps for more prosaic reasons. A collaboration with librettist Royce Vavrek, it’s a fragment of a planned larger work, a series of Salingeresque interconnected short stories set in American suburbia. This had the most thrilling opening of the three works on the program. “I wanna go to the Dairy Queen,” belts Michael Marcotte as the teenage boy protagonist, over and over, lending the words weight and urgency through sheer force and repetition. His sister, played by Lauren Worsham, responds with “Fine.” Marks brilliantly sets this monosyllable as a melismatic, melodramatic cry. Nothing afterwards quite approaches the unexpected sublimity of this moment, though a hilarious phallic Bible aria, sung by Timur Bekbosunov as the sister’s Christian boyfriend, comes close. If I have a complaint at all, it’s that Vavrek’s characters rarely rise above the level of caricature, though I feel churlish making this judgement about an excerpt, since their personalities and relationships may deepen as the work progresses.
The program concluded with selections from Tyondai Braxton’s Central Market, which has been recorded by the Wordless Music Orchestra, though as I understand it Braxton created a new arrangement for the LA Phil. This is a dense, often hyperactive piece, full of remarkable musical ideas—usually several happening simultaneously. Braxton’s experiments with guitar looping were the genesis of this piece, though it also quite deliberately recalls the jagged ostinati of Stravinsky’s “Shrovetide Fair.” It could be read as a manifesto of sorts, demonstrating that these different idioms of repetition aren’t incompatible, and in fact are in some cases identical. (Don’t call it a comeback, it’s been here for years.) But this makes the piece sound far more didactic than it actually is, when it’s really a natural, sure-footed expression of Braxton’s compositional voice. It was remarkable to hear live, with orchestrational details not audible in the album version popping out all over the place. It had a grand, majestic sweep to it that made even the kazoos sound formidable.