Showcase of Six New Operas-In-Progress plus an Entire New Opera to be Presented in L.A.

The L.A. based opera company, The Industry, has announced the third installment of its biennial West Coast workshop for new American operas. In February 2017, portions of six new operas-in-progress–composed by Nicholas Deyoe, William Gardiner, John Hastings, Laura Karpman, Marc Lowenstein, and Dylan Mattingly–will be presented as well as the concert premiere of Bonnie and Clyde by composer Andrew McIntosh and librettist Melinda Rice.

The Industry, a non-profit, artist-driven L.A.-based experimental opera company, has announced the third installment of its FIRST TAKE series, a biennial West Coast workshop for new American operas. In addition, the company has launched a new initiative entitled SECOND TAKE, which will feature an entire performance of a new opera first heard on a previous FIRST TAKE program. The two programs will provide a rare and vital opportunity for American opera creators to test new works before the public in a concert setting with full orchestration.

SECOND TAKE launches with the concert premiere of Bonnie and Clyde by composer Andrew McIntosh and librettist Melinda Rice on Saturday, February 25 (from 8 to 10 pm), at the ornate Wilshire Ebell Theatre (4401 W 8th St.). McIntosh and Rice were commissioned to complete the work with the generous support of Stephen Block, Leslie Lassiter, and Raulee Marcus.

A sneak listen to some of Bonnie and Clyde with commentary by its creators Andrew McIntosh and Melinda Rice.

FIRST TAKE and SECOND TAKE are curated by The Industry’s Artistic Director, Yuval Sharon, in collaboration with wild Up’s Artistic Director Christopher Rountree, The Industry’s Music Director Marc Lowenstein, and The Industry’s Executive Director Elizabeth Cline. FIRST TAKE is modeled on the format Sharon created during his four years as Project Director of New York City Opera’s VOX program between 2005-09. Of the 40 works Sharon workshopped at VOX, 25 have gone on to future life in companies around the world, including the first two operas produced by The Industry: Anne LeBaron’s Crescent City and Christopher Cerrone’s Pulitzer Prize-nominated Invisible Cities.

FIRST TAKE was launched on June 1, 2013 at the Hammer Museum’s Billy Wilder Theater. Among the six new works showcased was an opera by Pauline Oliveros, set to a text by the poet Ione, and a theatrical song-cycle by Mohammed Fairouz, set to Wayne Koestenbaum’s riff on Pierrot Lunaire. The second installment took place February 21, 2015 at the Wallis Annenberg Center for the Performing Arts; highlights included excerpts from new works by Anne LeBaron, Jenny Olivia Johnson, and Paul Pinto, as well as Andrew McIntosh’s Bonnie and Clyde, which will be heard in full in this year’s SECOND TAKE. 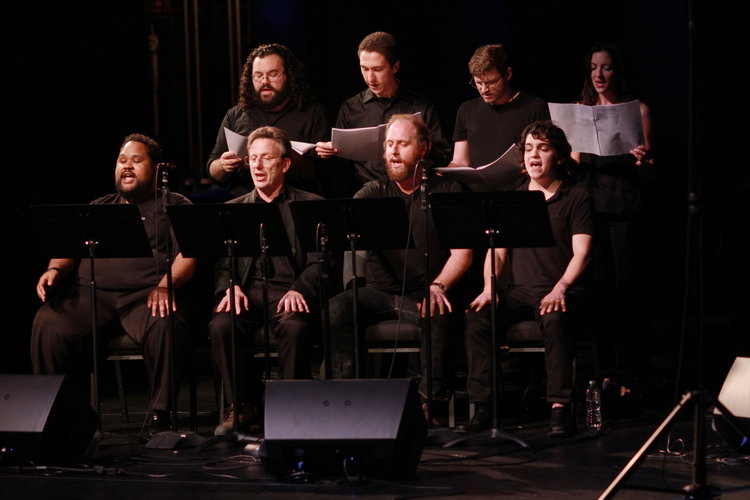 Below are brief descriptions of each of the new operas that will be featured during the 2017 season of FIRST TAKE.

A family opera from the music director of The Industry, Little Bear explores what fairy tales reveal about the psychology of time, change, loss, and love.

Music: Dylan Mattingly (Berkeley, CA)
Libretto: Thomas Bartscherer
An expansive and abstract love story in three acts, Stranger Love is an epic opera that traces the seasons and the velocity of universal expansion. Like Plato’s Symposium, it moves from love in a human and personal frame to archetypal and divine love.

More an installation than an opera, The Former World creates an artistic unfolding of geologic time in two time scales: earth and humanity. Musical layers are developed like the striations found in geology as four singers create a tapestry of text.

Balls dramatizes the tennis match between Billie Jean King and Bobby Riggs and draws on the comedic, dramatic, and hugely political nature of this match. “The Battle of the Sexes” changed not only the perception and treatment of women in sports forever, but substantially advanced the women’s rights movement.

Haydn’s Head is intended as a puppet opera. It is based on a true episode: four days after Haydn’s death, composer Johann Nepomuk Peter and a friend of Haydn’s, Joseph Carol Rosenbaum, opened the departed composer’s grave at night and stole his head. Their quest was fueled by the vogue for phrenology, the pseudo-scientific study of skull shapes.