“Matrices and Entropy” from the Austin Museum of Digital Art

This past Saturday, the Austin Museum of Digital Art presented the most recent concert in their performance series focused on experimental music and digital performance art. Though AMODA has no physical address (and really, isn’t that what you’d expect from a purely digital outfit?), their presence has been felt throughout the Austin area, and I was anxious to see what they had in store.

This past Saturday, the Austin Museum of Digital Art presented “Matrices and Entropy,” the most recent concert in their performance series focused on experimental music and digital performance art. AMODA has presented a variety of series over the years, including educational presentations, electronic concert music, and live interactive exhibitions. Though AMODA has no physical address (and really, isn’t that what you’d expect from a purely digital outfit?), their presence has been felt throughout the Austin area, and I was anxious to see what they had in store.

The show opened with Sam Pluta’s multimedia presentation data structures/monoliths ii (for chion)[*] which featured a variety of clips (with their original audio attached) from popular mainstream films manipulated in real time via Supercollider. Presented initially in short, two- to three-second bursts, the clips eventually began to take their place as structural elements of the piece despite their familiar origin. Patterns began to develop as the work progressed, though it was difficult to say whether these were intended or simply my brain trying to get its head around all the disparate input. The clips began to fly by more and more rapidly, leading to a climactic moment before slowing down and becoming arranged in such a way that their relative volume levels also decreased. This was followed by an extended (and thrice repeated) scene from the opening montage of the film Carrie which was, shall we say, somewhat calming relative to the hyperkinetic rapidity of the first section. Additionally, the Pino Donaggio music which accompanied this particular scene, all strings and slowly plucked guitar, was quite a “puppies and rainbows” setup for the deluge that followed. Fortunately, I’ve seen Carrie, so when the final iteration ended and gave way to a faster, louder, and more violent series of clips, I at least was able to keep my composure. This fugal section continued without respite, save for one clip featuring a man reaching for an electrical panel from which electricity was arching. This particularly calming image was the respite. Fortunately, the piece screeched to a halt before the guy blew up. 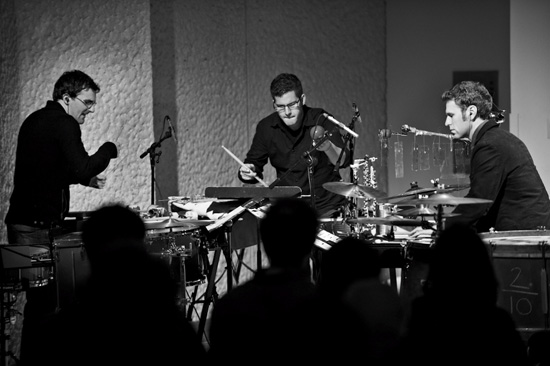 Percussion trio Line Upon Line performed Anders Vinjar’s +/- for assorted percussion and multichannel tape. The piece began with sparse offerings from non-pitched instruments that gave the impression of call and response or birdsong. Slowly, more clearly organized rhythms emerged from the spare texture, coalescing in short unified patterns and phrases and even the occasional pulse. This section came to a close after which the members pulled out sticks and went to work on the heads and sides of snares, timbales, and bongos. Grooves developed, stated even more clearly than before as smaller hand percussion was folded into the larger drum figures, recalling the introductory material and heralding one of the few instances when the pre-recorded audio gained prominence. Following the large, low frequency recorded bit, a section featuring cymbal scrapes and other metallic elements built to a climactic ending involving virtually every drum on the stage. 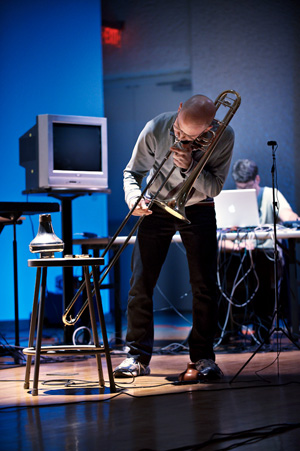 Steve Parker joined Pluta for an improv set featuring trombone and electronics. Following a prolonged silence, Parker began working for a living. Breath effects, short riffs, and flutter tongue were immediately processed through a variety of effects, from common delays and reverbs to stuttered bit-crushing in what became a canonic tit for tat between the two performers. Parker took the trombone apart, played with mutes, removed the bell and created suction with the slide (with his thumb over the tube) to create high pitched, pinched squealing effects. Most notable in this performance was Parker’s ability to go blow for blow with modern technology on a bunch of twisted tubes that are a few hundred years old.

Line Upon Line returned to the stage to perform Cage’s Variations II, which falls squarely into his “meditative/contemplative” category. As much about the silence as the sounds that punctuate it, Variations II allows the listener to become so focused on the silence that when the metal slabs are stroked, struck, or slammed, the sounds serve as markers or borders for that silence. The only downside of the experience was the air conditioner which droned on throughout the work, about which I imagine Cage would have been profoundly indifferent. 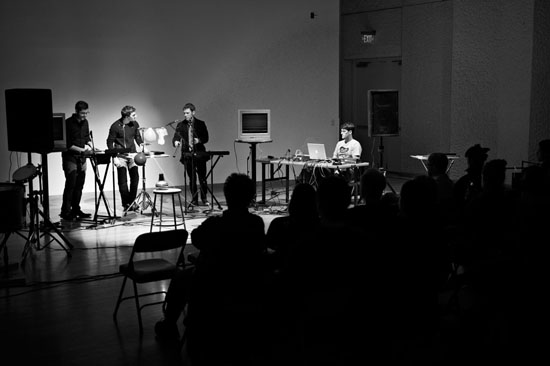 Line Upon Line and Sam Pluta. Photo by Craig Washburn.

The closing work was Pluta’s Matrices featuring Line Upon Line flanked by two televisions. These were the regular old 4:3 CRT monitors (as opposed to the ubiquitous 16:9 flatscreens) tuned to a static channel. With Pluta on laptop, the piece began with loud, piercing oscillations bursting from the speakers, sounding somewhat like the scratchy static from dirty guitar pots. The screens responded to the audio output, horizontal lines dancing up and down, forming, disappearing, and breaking into snowy static as the percussionists and Pluta performed. Each of the percussionists faced microphones and had different instruments to use. These were (from left to right, respectively) two handheld fans, the blades of which were allowed to slap against the mic, a balloon and a paper bag, and a bowed flexatone. In an alternating quasi-rondo form, the music basically alternated between two sections, the first featuring the above instruments played furiously by Line Upon Line and processed by Pluta , the second, shorter, featuring piercing rolls on two blocks of purple heart wood. The dichotomy of the jumpy action of the first section versus the short uniformity of the second was echoed in the juxtaposition of Line Upon Line’s physicality and Pluta’s immobile figure behind the laptop. Further, the piece followed the form of the concert in general, as it was in like a lion and out like a lamb.

AMODA held its concert in the Mexican American Cultural Center, its performance space a relative newcomer to the scene. It was a large “white box” of sorts with a backstage area separated by a delicately curved wall that seemed more like a spot to hang art than a dividing object. The crowd of around fifty was quite diverse, though the average age skewed a bit high, perhaps due to the eight to ten p.m. Saturday night time slot. The show ran straight through with no intermission and little in the way of formalities, short of a brief introduction. It was clean, neat, and well played sir, well played.

* The first piece performed was actually data structures/monoliths ii (for chion), not American Tokyo Daydream I (Calypso Sunrise), as was indicated in the printed program. The swap was brought to our attention after the post of this report, and we have updated it to reflect that change.