“I didn’t expect it to be so charming…” I heard the above quote in the foyer during the intermission of the first of two concerts scheduled during their residency with Texas Performing Arts, and I’m inclined to agree. 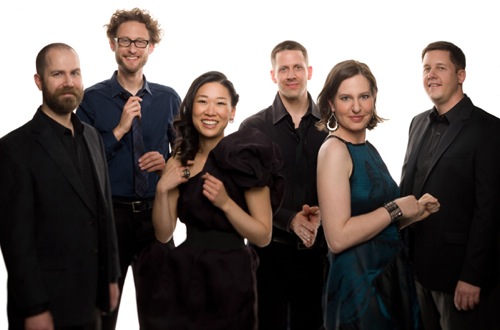 “I didn’t expect it to be so charming…”
The ensemble eighth blackbird has set up shop in Austin for ten days populated with concerts, masterclasses, and lessons. I heard the above quote in the foyer during the intermission of the first of two concerts scheduled during their residency with Texas Performing Arts, and I’m inclined to agree with the sentiment. The group has always been more bon vivant than enfant terrible, their collective personality more welcoming than foreboding. I’m pretty sure everybody is smiling in their press photo. Having said that, not all audience members attending these shows know exactly what to expect. “New Music” can still shiver a few timbers among concertgoers, and when they see a program full of unfamiliar composers, some will look for the exit doors. Of course, eighth blackbird put any concerns to rest with their spot-on performances and engaging personalities.

The concert opened with Nico Muhly’s Doublespeak. Written in honor of Philip Glass’s 75th birthday, Muhly managed to pay homage to the man without aping his greatest hits. The work opened with repetitive germs played by violinist Yvonne Lam which grew bit by bit as the other players joined in, but just as the material began to gel, the work slammed to a halt, sputtered for a moment, and came back to life, this time with Nicholas Photinos leading the charge on cello. Muhly drew deeply from Glass’s harmonic and rhythmic vocabulary; driving rhythms filled out with simple harmonies drove the piece forward until about a quarter of the way in where Muhly injected a bit of chromaticism that seemed for a moment to draw the piece in a different direction. Soon the original texture returned, revealing something of a modified rondo. The sections bounced back and forth until the final moments of the piece, when Photinos and percussionist Matthew Duvall picked out syncopated hits together, the last hit ending the piece.

Flanked by Photinos and clarinetist Michael J. Maccaferri as narrators, Lam performed Knee Play II from Glass’s Einstein on the Beach. These bookend entr’acte sections were used to facilitate set changes and to begin and end Einstein, and the presentation here of Knee Play II apart from the full opera allowed for focus on an otherwise somewhat utilitarian work. I have to say that I was surprised at the level of tension created by watching Lam perform the simple scales and arpeggios (played expertly and super quick folks, no doubt) that constituted the piece. Obviously it wasn’t an easy work, but seeing her chug away while Photinos and Maccaferri read—or chanted…or chanted slightly creepily—in monotone stereo certainly added to the tension. Will she miss? Will the narrative distract her from her duties? Of course, Lam didn’t miss a thing and Photinos and Maccaferri complemented her playing quite well.

The tension of Knee Play II was dissipated in short order by Tom Johnson’s Counting Duets. Described by Lisa Kaplan as “Sesame Street on crack,” the work was performed by Maccaferri and flutist Tim Munro in another duet, this one involving numbers spoken. While the cheeky introduction was endearing, it was the piece itself that hooked the audience, many of whom (present company included) were laughing out loud by the time the work ended. The four movements involved Maccaferri and Munro counting, hocketing, whispering, and yelling simple number sequences to/at each other while they constantly changed their physical position on stage relative to one another. I could talk about the simple additive processes (though written in 1982, similar at a DNA level to the final movement of David Lang’s So Called Laws of Nature) but at the risk of assuming composer intention here, I think that’s missing the point. The piece engaged the audience by laying bare the processes that drove it, giving them an opportunity to figure out each short puzzle as it played out. This, coupled with the visual impact of the tall and lanky Munro and the less tall Maccaferri rapidly yelling numbers back and forth at one another, made for one of the most engaging moments of the night: when both performers walked off stage and the lights were dimmed, seeming to indicate the end of the piece. As the audience began to enthusiastically applaud, Munro (now slightly horse from yelling) began the final sequence from stage right as Maccaferri responded from stage left. Everyone quieted down until they finished and returned to the stage to some of the loudest applause of the night. My wife and I are expecting a baby in a few months, and about halfway through the piece she grabbed my notebook and wrote what you see in the image below: 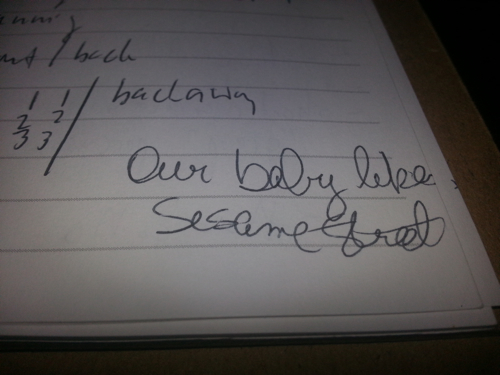 So there you go. Everybody liked it.

In sharp contrast to the lightness of the Johnson, Aaron Jay Kernis’s Pieces of Winter Sky saw the return of the entire ensemble to the stage for this longer, more somber work. The third of four commissions of the night, the Kernis began with Kaplan and Duvall bowing inside the piano with loose bow strings, the thin, ethereal, overtone-laden pitches joined by harmonics in the other instruments. Short bird-song melodies were traded among the players, only to fade into nothingness before fully forming. A violin solo was accompanied by the bowing and scraping of cymbals by all five other members as the ghost of Winterreise passed through the room. Derek Bermel’s Tied Shifts is one of eighth blackbird’s chestnuts, and it was treat to watch and hear. A study in Bulgarian rhythms and careful choreography, the ante was upped in the visual impact department as the blackbirds moved about the stage. Arrangements of two of Ligeti’s mid-’80s piano etudes followed, including No. 4, Fanfares, which recalled the moto perpetuo intensity of the Glass, now spread across the ensemble. Finally, Andy Akiho’s erase, the commissioned work resulting from the ensemble’s 2011 composition competition rounded out the program. A tour de force, the piece careened through tutti roller coasters, glissando workouts in the piano and on the vibes, and noir-through-a-kaleidoscope excursions complete with Maccaferri conjuring with his bass clarinet. The piece shattered to a close with Duvall doing a bit of John Bonham to take us home.

I expected to see a fantastic show and was not disappointed, but what struck me most was how well integrated the whole program was. The Muhly lead to the Glass both musically and in terms of the relationship between the composers, and the blackbirds indicated that without making a big deal out of it. The Glass lead to the Johnson, the trio now a duet, and the symmetry inherent in the structure of the works linked them while their characters contrasted. Even across the bridge of intermission, connections were made such that the concert was more like a large piece itself, a reminder of what it was like when we bought albums (records, tapes, CDs, whatever) that were shaped not just by their content but by their ordering. It’s attention to these factors that give eighth blackbird their edge, and I’m certainly looking forward to their next show.