You Study, Practice, and Improve

Much of composing is just like any other skill or ability: you study, practice, and improve. Learning how instruments work and what is idiomatic is a long process that involves a lot of trial and error. Every rehearsal and performance experience compels me to reexamine what and how I write.

Last Sunday, I flew from New York City to Minneapolis. I boarded my flight and almost immediately fell asleep. When I woke up mid-flight (just in time for the drink cart to arrive at my aisle), the woman seated next to me commented, “You’re very quiet!”

I almost responded with “You’re welcome,” but I thought that might come off as a little snarky. Instead, I nodded and smiled and hoped she’d leave me to enjoy my lukewarm coffee. Much to my chagrin, she started asking questions. Am I from Minneapolis? From New York? Traveling for work? For fun? Blinking vigorously and rubbing my eyes in an attempt to re-moisten my contact lenses, I answered her questions, and I didn’t make a single thing up (as I usually do). I told her I was flying to Minneapolis to participate in the Minnesota Orchestra Composer Institute.

“A composer!” she gasped. “Wow. Just, wow. That is a true gift. Wow.” She then proceeded to barrage me with unsolicited, ill-informed career advice, which I won’t get into here. But, to return to her initial reaction–this kind of statement isn’t uncommon. Composing can be a mysterious thing to both musicians and non-musicians, and many people describe it as a “gift,” as if we composers possess special powers. Others simply say, “Composing? That sounds really hard.”

Much of composing, though, is just like any other skill or ability: you study, practice, and improve. I’m sometimes tempted to answer the question of “So, do you know how to play all the instruments?” with “Why yes, I do.” But, learning how instruments work and what is idiomatic is a long process that involves a lot of trial and error. Countless rehearsals and performances over the past ten years or so have taught me what works, what’s risky, and what fails. And I’m still learning! Every rehearsal and performance experience compels me to reexamine what and how I write.

Learning how instruments work and what is idiomatic is a long process that involves a lot of trial and error.

Orchestral writing can be particularly tricky because opportunities for readings and performances can be few and far between, especially for “emerging” composers. This past year, I’ve been incredibly fortunate to have worked on Likely Pictures in Haphazard Sky with three different orchestras: the Yale Philharmonia, the American Composers Orchestra, and most recently, the Minnesota Orchestra. 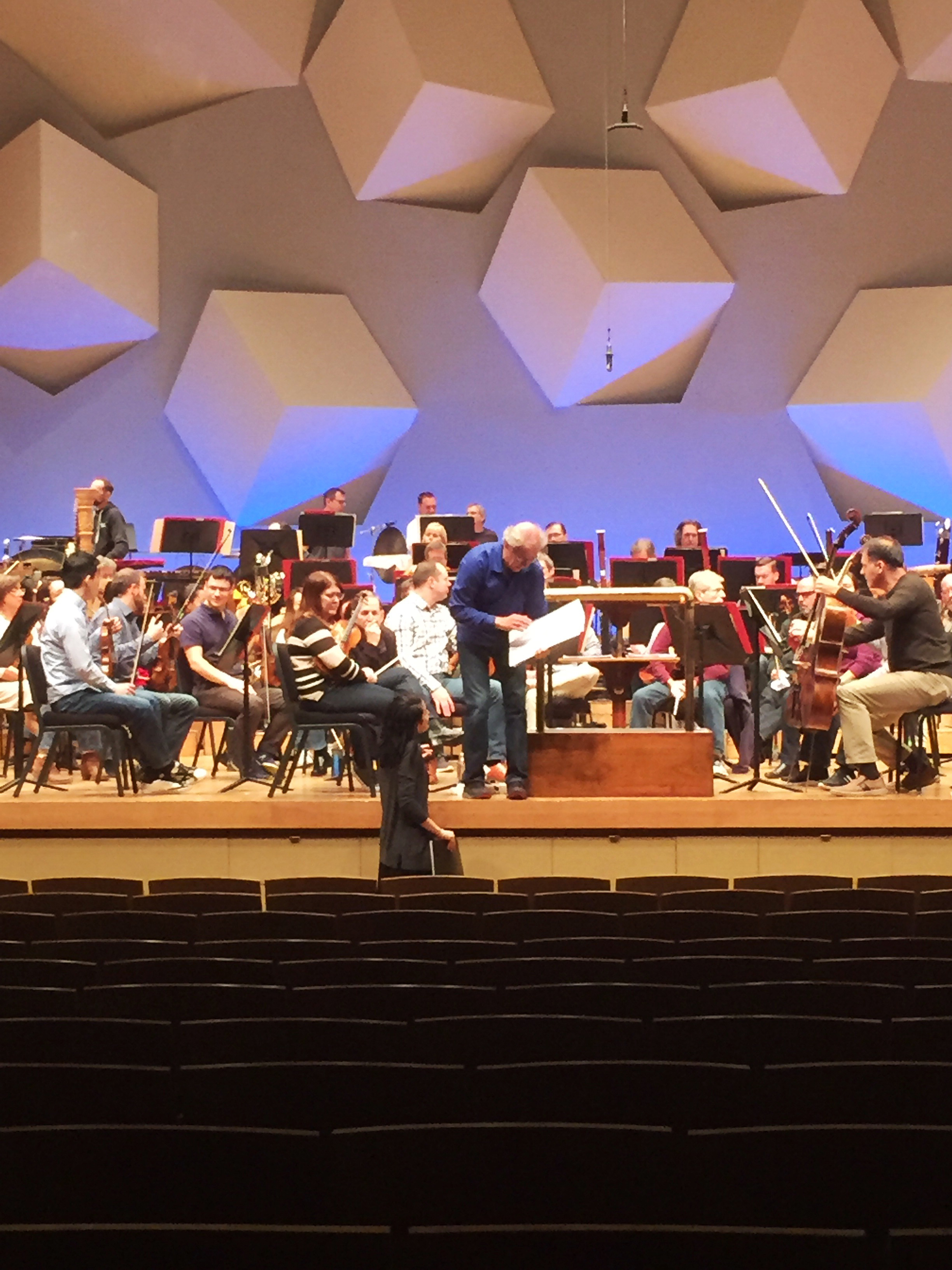 Hilary Purrington with score in hand discusses a detail in her score with Osmo Vänskä during a rehearsal with the Minnesota Orchestra.

Directed by composer Kevin Puts, the Minnesota Orchestra Composer Institute lasts for five full days and includes workshops, rehearsals, and meetings with conductor Osmo Vänskä and musicians from the orchestra. The program culminates in the Future Classics concert on the final day of the program. The Institute is comprehensive, and each composer’s work receives thorough and generous rehearsal time. We were all astounded by the speed at which the musicians of the Minnesota Orchestra learn and understand new pieces. By the second rehearsal, Maestro Vänskä and the orchestra musicians were no longer assembling the pieces and figuring out how they worked; rather, the ensemble had shifted its focus to musical and artistic decisions.

Throughout the week, the seven participating composers met with representatives from each of the orchestra’s sections. The musicians gave us honest feedback regarding our writing for their instruments and how we chose to notate and format our music.  Similar themes reappeared throughout these meetings. The musicians repeatedly reminded us that they have very busy musical lives and are responsible for learning massive volumes of music. Given the limited amount of practice time a musician has for a single piece, it is vitally important that our writing is as clear as possible and simple to put together. For very practical reasons, no performer wants to be responsible for solving a complicated puzzle.

Musicians also assume that everything they see in their part will be heard. It can be disappointing to find out that a technically demanding passage is either completely obscured or “just an effect.” The “just an effect” issue is a common problem, especially when extended techniques are involved. Certain effects may work well in chamber contexts, but they don’t necessarily translate well to orchestral writing. Many extended techniques are quiet and subtle, and their effects are lost because they are obscured or simply can’t carry through a large hall.

The musicians of the Minnesota Orchestra also stressed the importance of clear notation. Several individuals pointed out that modern notation created with computers can lead composers to make overly complicated parts. Rather than providing clarity, “over-notated” passages only cause confusion and frustration. In many instances, it can be better to use words to convey the composer’s intentions. But, don’t use too many words. One of the musicians asked me to use fewer adjectives and descriptions. So, you can’t necessarily please everyone, but it is helpful to consider the many perspectives and opinions of individual orchestra members.

For me, one of the most fascinating aspects of the week was the opportunity to learn my colleagues’ music. The seven of us (Saad Haddad, Andrew Hsu, Peter Shin, Nina Young, Dan Schlosberg, Charles Peck, and myself) have very different musical instincts when it comes to composing for orchestra. Observing the choices that other composers make—whether musical or notational—and how these decisions impact rehearsals performances is both educational and inspiring. 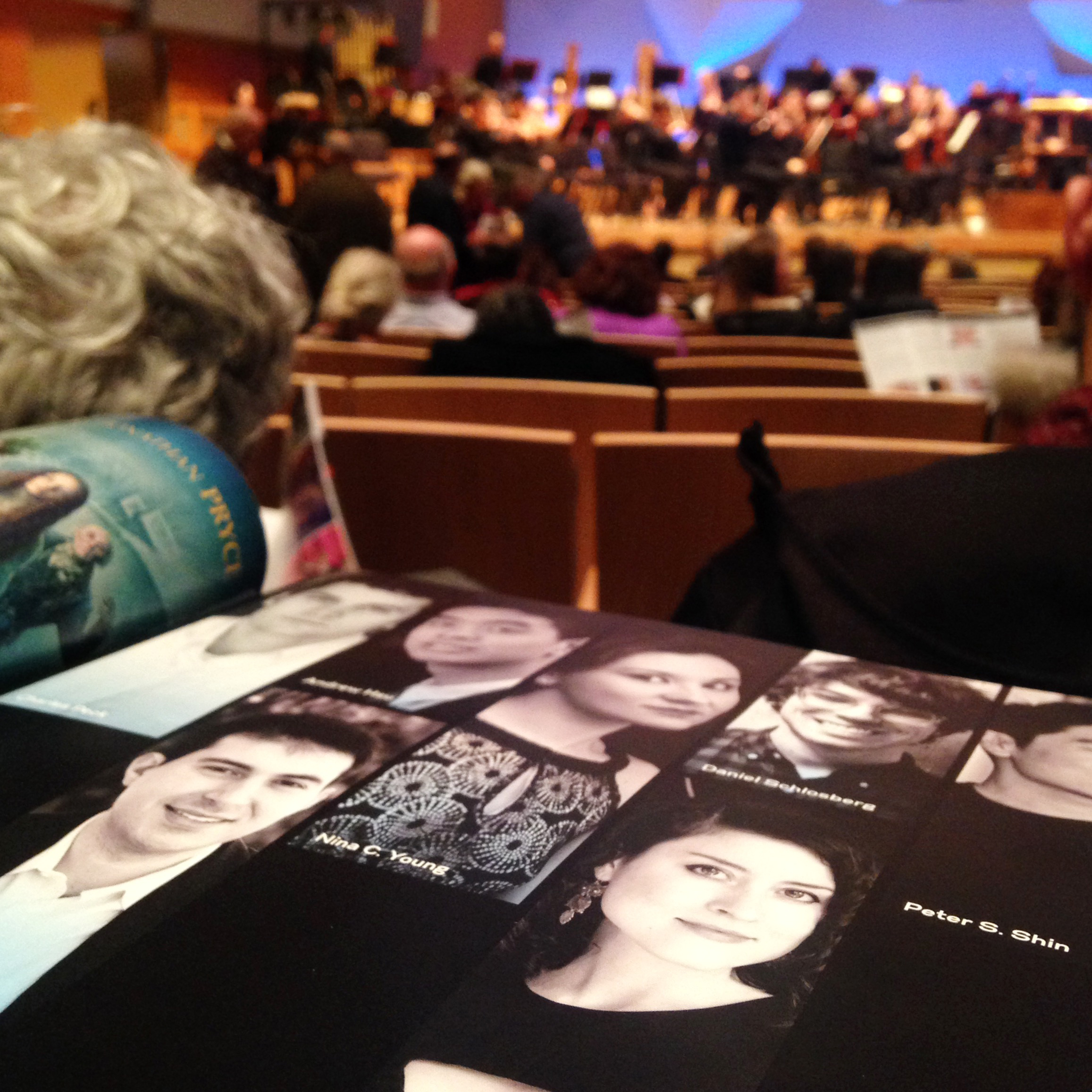 It was also incredibly clear to us how important the Composer Institute is to the Minnesota Orchestra. Rather than handing the concert off to an assistant, Music Director Osmo Vänskä studied, learned, and conducted all of our pieces. He gave thoughtful feedback and criticism, and made us feel as if our music is just as important as the repertoire of any standard concert. The orchestra musicians, rather than sight reading in the first rehearsal, had actually taken the time to practice their parts; many had even contacted us beforehand with specific questions.

The Orchestra’s communications team worked hard to promote the concert, and it showed. The turnout for the performance was remarkable: the hall appeared almost full, and Orchestra Hall is not a diminutive space. During the intermission and following the concert, audience members sought to speak with us, and their enthusiasm for new music and the Minnesota Orchestra was more than apparent.

And, regarding the performances themselves, Maestro Vänskä and all the musicians were thoroughly invested in the music. All of our pieces were performed thoughtfully and musically. The Orchestra’s performance of Likely Pictures in Haphazard Sky was flawlessly executed and beautifully paced, and I couldn’t be happier with how it sounded.

Hearing my own work is always informative. Rehearsal and performances reveal if my choices were correct or highly questionable. But, my experience at the Composer Institute went beyond the typical rehearse-then-perform process. We received thoughtful feedback from the musicians and the conductor, and we had the opportunity to learn one another’s works and witness how our colleagues’ compositional decisions played out.

We can’t experiment without hearing our music rehearsed and performed by live ensembles.

Compositional skill develops with study and experimentation; however, we can’t experiment without hearing our music rehearsed and performed by live ensembles. Experiences such as the Minnesota Orchestra Composer Institute give composers much-needed opportunities to hear works realized. I learned so much this past week, more than I can sum up in a blog post. I’m back in New York City now, and I’m excited to work and write and apply what I’ve learned. 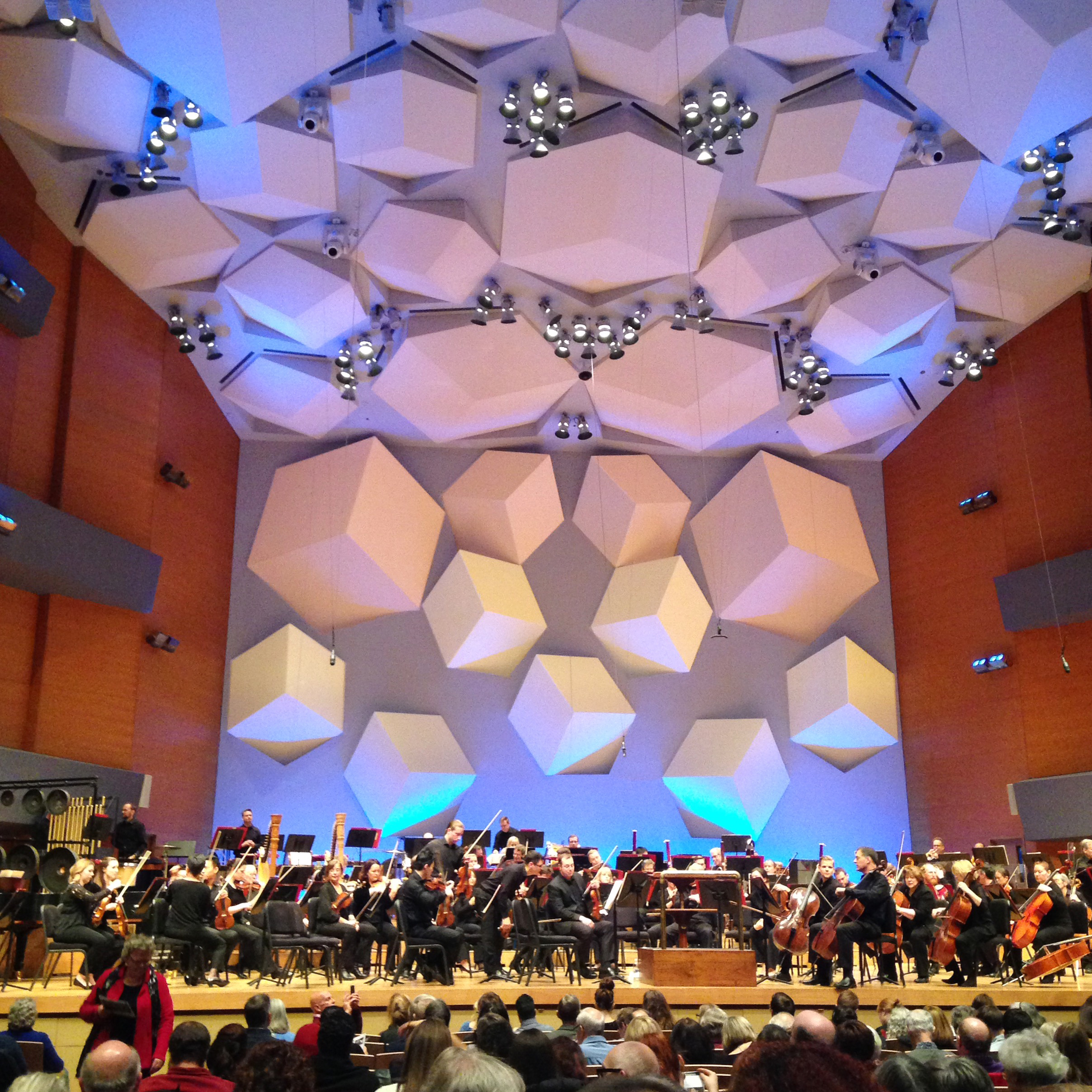 There was a nearly full house for the Minnesota Orchestra’s Future Classics concert on Friday, November 10.