Writing Over: The Intimacy of Creativity / The Bright Sheng Partnership
NewMusicBox
Written By

Writing Over: The Intimacy of Creativity / The Bright Sheng Partnership

The brainchild of composer Bright Sheng, “The Intimacy of Creativity” aims to bring a workshopping culture to chamber music, organized around a course of rehearsals, discussions, and performances of music by invited composers.

In Mong Kok, tenements and market streets surround a five-star hotel and its Michelin-starred restaurant. In Kowloon City, landscape-architected Walled City Park eerily reminds you of the chaotic district that it replaced. In the city parks, locals practice Tai Chi in small groups. Evenings, expats teem into the streets of Lan Kwai Fong, and laze around Cameron Road in Tsim Sha Tsui. This is Hong Kong, begging you in every gaze to compare the old and the new. 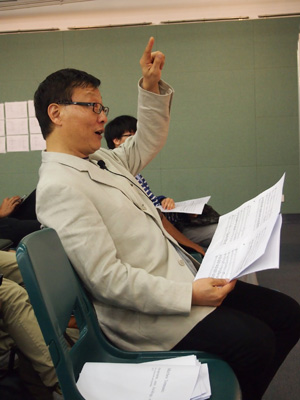 Bright Sheng reaching for the stars.

I traveled here to participate in a contemporary music festival now in its second year called “The Intimacy of Creativity,” arriving two days early to explore the city, and to recover from jet lag. The program, the brainchild of composer Bright Sheng, aims to bring a workshopping culture to chamber music. It takes place at the astonishing Clearwater Bay campus of the Hong Kong University of Science and Technology (HKUST), and it is organized around a course of rehearsals, discussions, and performances of music by invited composers (and of Beethoven—but more on that later). On the whole it was a fantastic experience, though not without its imperfections.

I should start by stating that my own compositional lineage is one probably familiar to readers of this site: a well-worn path through universities, degrees, and new music concerts. In the last few years, though, I have discovered joy in writing for musical theater, the workshopping process of which was a surprising revelation. As a member of the BMI Musical Theater writing workshops, I have seen writers’ works benefit immensely from constructive criticism. So it was exciting for me to see a chamber music program using this approach. Apart from opera, revision based on public feedback is generally eschewed in the world of classical music. Why? 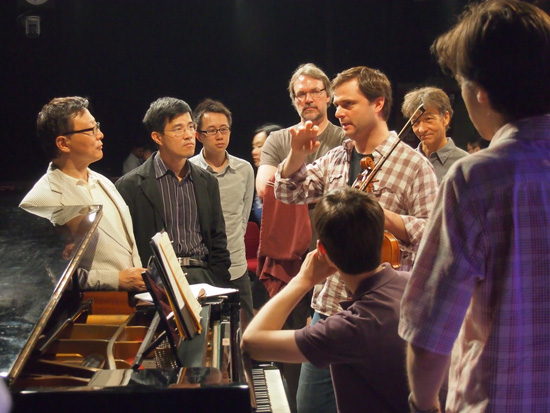 For Bright Sheng, this question was a motivator for the festival itself. The other was to repair what he perceives as rift between composers and performers. To explore these ideas, he brought together seasoned composers Joan Tower and Mark O’Connor; as well as younger composers including myself, and a host of performers. Most of the composers doubled as performers during the festival as well.

For the composers, the open discussion and rehearsal of our music compelled us to see our own works more objectively, opening the door to revision. For the performers, it was an opportunity to engage and connect with the works, and to pass along that excitement to the audience. 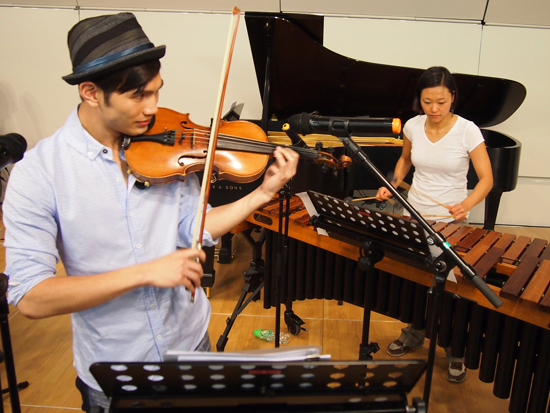 On the whole, the festival achieved these goals. But talking about instrumental music can be difficult, so the conversation frequently became mired in unspecific talk and interactions bordering on interrogation. The proceedings were protocol-less, and even further confused by the presence of hundreds of the university’s music theory and music appreciation students attending the open discussions in lieu of their regular lectures.

The Intimacy of Creativity, or IC as its architects are starting to call it, has the additional goal of the enrichment of HKUST students, and indeed, much of the profoundly generous funding for the program arises from the fulfillment of this purpose. Only a small minority of the students seemed engaged with the discussions, though. Others chatted with each other, or else stared into the glowing screens in their laps.

But on to the music. The trio I presented there was designed as a sort of puzzle; I wanted the music both to interrupt itself and maintain a narrative. I imagined myself as the director of a baseball game, switching between camera angles, but always staying with the flow of the game. So I called the piece Control Room. Through spirited discussion, we discovered that both the title and the music itself were working against its concept. The performers understood my description of the puzzle, but it didn’t give them any sort of direction. Flutist Adrian Spence discovered that a slight change in perspective could shed a different light on performing the piece: really, the piece is about distraction. Seizing upon this idea made my revisions and the performers’ interpretation much clearer. I extended a section, rewrote a few measures, altered rhythms, changed some registrations, and cut a page. And the new title became something that the performers, composer and audience could all rally behind: You are always distracted by something.

All the composers at IC identified aspects of their pieces to improve: smoothing out a blip in pacing, making a bona fide ending, lengthening lines without adding measures, spacing out beautiful passages, reigning in too-oblique variations, or making ingenious cuts.

In addition to the new works, the festival also included two early pieces of Beethoven—the Op. 11 Piano Trio and the C Major Piano Quartet. Since these works were receiving the same open discussion treatment as the newer compositions, I was hoping to witness some entertainingly blasphemous performance decisions or cuts, but they didn’t materialize. I suppose these pieces offered a crowd-pleasing way to end two concerts of contemporary music. Frank J. Oteri, who attended one of the concerts, wrote about how jarring this was for him, but I would propose the programming worked on a conceptual level after all.

The rather unhip full title of the festival is “The Intimacy of Creativity / The Bright Sheng Partnership: Composers meet Performers in Hong Kong.” Verbose, yes, but it actually describes the success of the festival. Over its two weeks, a dialog developed among all of the participating composers and musicians, simultaneously offering HKUST students a window into the artists’ creative and collaborative processes. Attempts to include the students themselves in the conversation played out awkwardly, but still, involving the students represents a compelling aspect of the project.

IC was very generous to us, with numerous events, classy dinners, and the gift of time to explore Hong Kong, even on concert days. So with a few hours off after sound check on May Day, I set out walking again. On Upper Lascar Row in SoHo, wunderkammern antique shops mingle with chintzy tourist versions full of knick-knacks and Mao-kitsch. On the side streets, there’s a different sort of antique inventory: dirty rotary phones, plastic toys orphaned from their sets, bygone electronics, fancy decanters, and piles of books and LPs. Down the hill then, past reeking streets of inscrutable dried fish. Past steaming noodle shops, dingy, but not hurting for customers. Doubling back now, walking toward Admiralty’s impressive modernist skyscrapers, and past the scores of Filipino maids on a day off, lunching, relaxing, singing, and dancing in the shade under HSBC, along the outside walls of City Hall, in the Star Ferry tunnels, and next to the barricades to the ongoing land reclamation into Victoria Harbor. 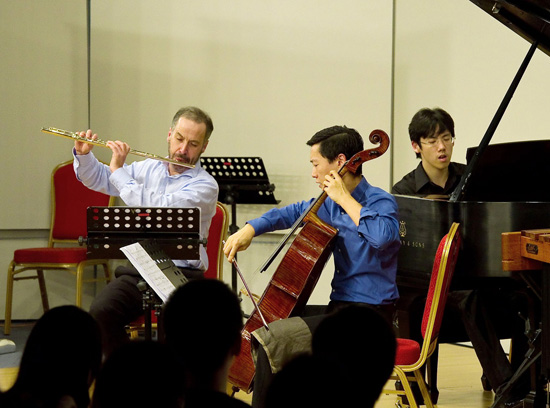 The original City Hall used to sit on the other side of Queen’s Road where I.M. Pei’s Bank of China Tower now stands. The current, blocky, 1950s City Hall rests on reclaimed land. But not far off, Asia Society Hong Kong boasts a new take on building over the past, namely by building magnificently around it. There, on a hilly plot, historic constructions mingle vibrantly with modern design. So finally stepping back into City Hall’s chilled echoing foyer, and ascending the stairs to the theater, I wonder if by presenting Beethoven amid modern music, we’re giving him the same treatment. 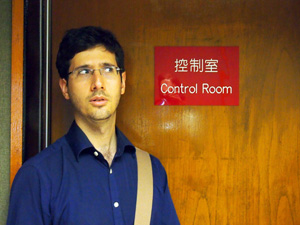