Why “Don’t Play for Free” Is Not Enough

I’ve been thinking a lot about this over the last two weeks because I felt that this was an unrealistic route to change. Here are some reasons why I think that the statement isn’t sufficient to address the problem of unpaid gigs. 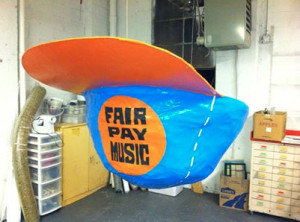 Just say no to “pass the hat” gigs.
Photo by Gregory Nissen

In response to my first column, the first comment was an admonition to musicians that they shouldn’t play for free.  I’ve been thinking a lot about this over the last two weeks because I felt that this was an unrealistic route to change, but I hadn’t been able to say exactly why. Here are some reasons why I think that the statement isn’t sufficient to address the problem of unpaid gigs.

1.) No one person can change a system. If you turn down a free gig, is it a strike? No, because you are not an employee leveraging power. (Although Italians launched an effective “culture strike” in 2010.) Is it a boycott? Not exactly, but more similarly, in that it’s a withdrawal from a practice for an ethical reason, with hopes to change the system through a negative multiplier effect. If no one plays without compensation, something has to change.

For a musician simply to remove himself or herself from the industry might be noble, but it will do little or nothing to change the industry as a whole.  If it ends there, it’s a relatively passive, individualist form of resistance. The power to effect real, systemic change comes only in the communication of grievances and organizing.

Communicating with the venue and fellow musicians about why you refuse to work for free is a start, and then trying to work with the venue to get it to change is even better. If that fails, getting together with others is how you turn your individualism into a community act. Now, an organized boycott—that’s a thing! And probably the only thing that you’d want to do if you dare speak up at all, because there is safety in numbers. 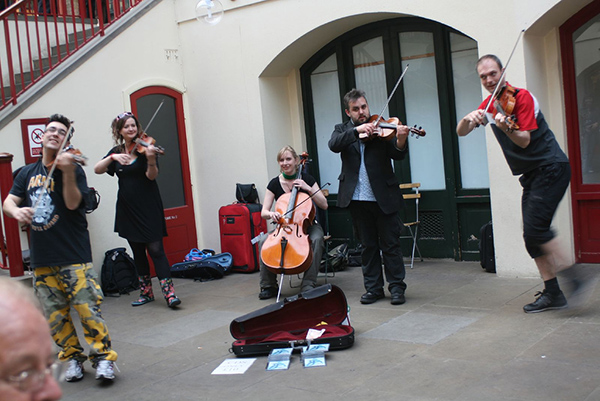 3.) Sometimes you don’t know you’re playing a free gig until it is over. This is well evidenced in the controversy over the 2013 Chicago Beethoven Festival, where musicians and venues alike were not paid by organizer George Lepauw. Lepauw explained that “the Festival experienced a combination of factors which unexpectedly led to the discrepancy between expenditures and income”—which means they didn’t have the money.

The dreaded discrepancy can come for any reason: ineptitude, bad ticket sales, a failed grant application, or some weather disaster. In each scenario, the promoter has taken a risk and lost. It wasn’t the musicians’ fault or the fault of anyone else legally contracted to do the work, and they should not suffer for someone else’s bad event management.

4.) Unpaid labor is often coercive—some people really can’t say no if they want to stay in the field. There are many forms of social pressure that go into getting a musician to play without pay:  current position with a group, promise of a future job, respect for seniority, some sense of obligation to friend or teacher, the prestige of the gig, or the idea of cultural norms for a genre. If musicians are not truly free to say no to a gig without fear of future detriment to their careers, then coercion is part of the unpaid deal.

Abuse is a strong word, but I think that it applies when thinking about the compromises a leader, teacher, or promoter may ask of a musician. But why would another musician be angry when they know that this practice is widespread? The Center for Relationship Abuse Awareness writes, “One reason people blame a victim is to distance themselves from an unpleasant occurrence and thereby confirm their own invulnerability to the risk.” Perhaps it is our own fear of being caught in a similar position—and anxiety about what we’d do—that causes such frustration.

To change coercion, a lot of cultural practices around performance would have to change. At the very least, there should be independent checks on institutions and people with the power to exploit their underlings in this way.
5.) “Paying your dues” through unpaid gigs means reinforcing the labor status quo.

A friend of mine moved to New York City from the Midwest, where she was a highly sought-after jazz pianist. After two years of unpaid gigs, sitting in and showing up to jams, she finally started getting into the network of paid work. If she’d been wealthy, those two years wouldn’t have mattered. If she’d gone to school in New York, she would have passed this hurdle young.  The problem was that she had to pay rent during those two years, and so the job that made more sense was not in music.

So asking someone to “pay dues,” which is really a form of coercion, means that those who are already at an economic disadvantage within the field will be even less likely to make it if they have to spend time earning wages elsewhere. They simply cannot play all the free gigs someone with wealth can, and thus they won’t be able to put in the time which leads to getting paid.
This is similar to the arguments around the widespread use of unpaid internships, and exacerbates unequal access to future paid work. Both depend on eager new entrants into the already crowded workforce willing and able to accept training and experience but no wages. 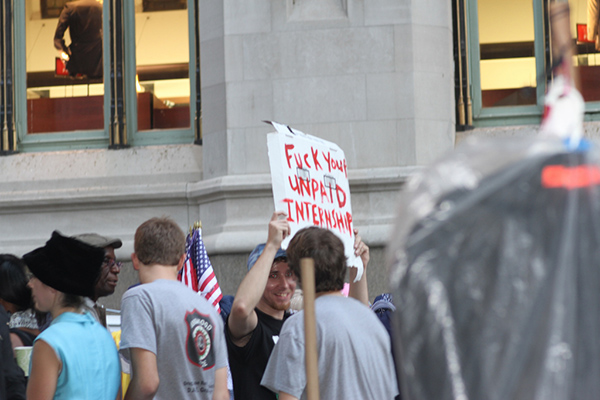 6.) The “if you do free work, you’re taking away my job” argument. This is written generically to show the parallel to other forms of labor protectionism based on rank. If someone is more established in the field, chances are they went through some form of the exploitative system and have come out on top, into the promised land of paid gigs. Now, they seek to protect their status by shutting down the current avenue of advancement in the field—free labor. Instead of focusing on shutting down worker’s opportunities for advancement, established musicians need to use their reputations and prestige to try to end this system of exploiting incoming musicians. This does not come from yelling at musicians for taking free gigs; it comes from demanding fair contracts for all and asking audiences to demand the same.

Are there times and places to take unpaid gigs? Yes, as David Hahn and others have written, charity and friend favors and maybe even “having fun” are good reasons to do things, but these are best assessed as what they are, with no blinders—tradeoffs made to positively affect some other part of life than one’s income. Playing music is part of a total life experience—from earning to gifting to community building—but I believe that musicians should have an informed choice when putting their labor into service and should never be coerced into unpaid work when it will hurt their ability, or the community’s ability, to survive.