Would music by any other title sound the same? Composer John Supko and critic Jeffrey Edelstein contemplate the naming game. 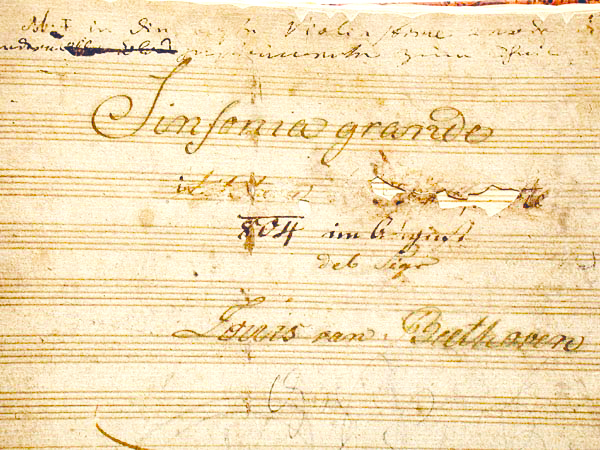 Jeffrey Edelstein, critic: I wonder how the history of titles helps to shape the thinking of composers? Why do some titles seem to help you hear a piece and others do not? Why do some magnify the mood of a piece and others do not? Why do I remember some titles and not others? What are the mysterious attributes of a great one? Some titles are urgent—Frederic Rzewski’s The People United Will Never Be Defeated!—and others seem to take on meaning more slowly—David Lang’s statement to the court—and yet both resonate with their times. A title may be literal and poetic simultaneously—Michael Gordon’s Rushes. And a title may be literal and allusive—Georg Friedrich Haas’s In iij. Noct. Titles may seem evasive, ironic, or serviceable, but I am not always sure how composers think about them. I can smile along with some of Milton Babbitt’s titles—The Joy of More Sextets—but then the music starts…

John Supko, composer: A good title will tempt listeners to invent the meaning of a piece for themselves. This is a fine thing, if you ask me, but it’s difficult to know who benefits more—composers or listeners—from this hard-won ambiguity. Composers slogged through centuries in which titles were little more than taxonomy: Sonata, Fugue, Mazurka, Passacaglia. With marvelous economy, historical titles supplied quantities of structural information to audiences about the music they were going to hear. A title for earlier composers was like a blueprint, implying a set of instructions to follow, a collection of expectations to satisfy. The expectations were the listeners’ and they could be extremely precise and technical, concerning the number and treatment of melodic themes, the harmonic trajectory, the roles of instruments, the time signature and rhythmic material, the use of repetition and even register, to name a few that spring to mind. Composers who survived the scythe of history distinguished themselves not simply by their dexterity in fulfilling the expectations of listeners but by doing so through the judicious use of those acceptable anomalies we have come to call personal style. The same roiling audacity that led Beethoven to expand sonata form eventually bubbled over and engulfed the entire concept of form itself. After a while, there were no longer names for the forms composers were fashioning except those they themselves dreamed up. What, after all, is the form of Liszt’s Nuages gris but that of a flock of drifting clouds?

Today, in the absence of formal conventions, titles are more important than ever before. They often represent the audience’s first contact with a composer’s work, and thus their first attempt at understanding it. But now a title can be anything, from elegantly suggestive, such as David Lang’s death speaks, to unpronounceably opaque, as Georg Friedrich Haas’s “….” appears to be. In deciphering the latter title, perhaps it would help to know the title of another Haas work, in vain, from which to intuit a potential affinity with Beckett. Could this elliptical title bear some relation to the gaps that proliferate—or at least the feelings they elicit—at the end of Watt?  These thoughts might slide through our minds upon finding “….” listed on a concert flyer, and we might be wrong on the particulars, but we can nevertheless develop a vague sense of the aesthetic territory the work inhabits. Somehow we feel sure that this work will not be a Neo-Romantic tone poem. Nothing about the title, however, would suggest that it was a double concerto for accordion and viola.

The titles you’ve mentioned track my own initial thoughts about what titles can mean and do. As it happens, I also thought of Milton Babbitt, but not of any particular piece. It was rather the great discursive range in his titles that intrigued me, from the dead serious (Three Compositions for Piano) to the downright goofy (Septet but Equal). I thought about the public’s image of Babbitt as the severe wizard of musical modernism, and how easily even a cursory perusal of his titles would demolish that fiction.  But I also wondered, like you, about the obvious disparities in, let’s say, tone of voice, between Babbitt’s titles and musical language. Four Play is a 16-minute work for clarinet, violin, cello, and piano, and it’s as spiky and serious as anything Babbitt wrote. The work’s title can be overlooked by the inattentive, but its reference is clear. Surely it’s significant that such an unremittingly sober composition should have a salty double entendre for a title. This collision of sex and serialism may have been Babbitt’s most magnificent dissonance.

Four Play contains no obvious humor, much less sensuality, in its musical material, so the title doesn’t seem to provide any clues to prepare the listener beyond signaling that it is a quartet. Is Four Play‘s mischievous title meant to soften the sharp edges of its musical argument? Perhaps it willfully undermines the work in the manner of Satie’s Airs à faire fuir (Songs to Make You Run Away and Préludes flasques (pour un chien) (Flabby Preludes for a Dog)?  Or does such a title represent a general disregard for the importance and utility of titles? We can only observe that Babbitt’s title tells us something his music doesn’t. 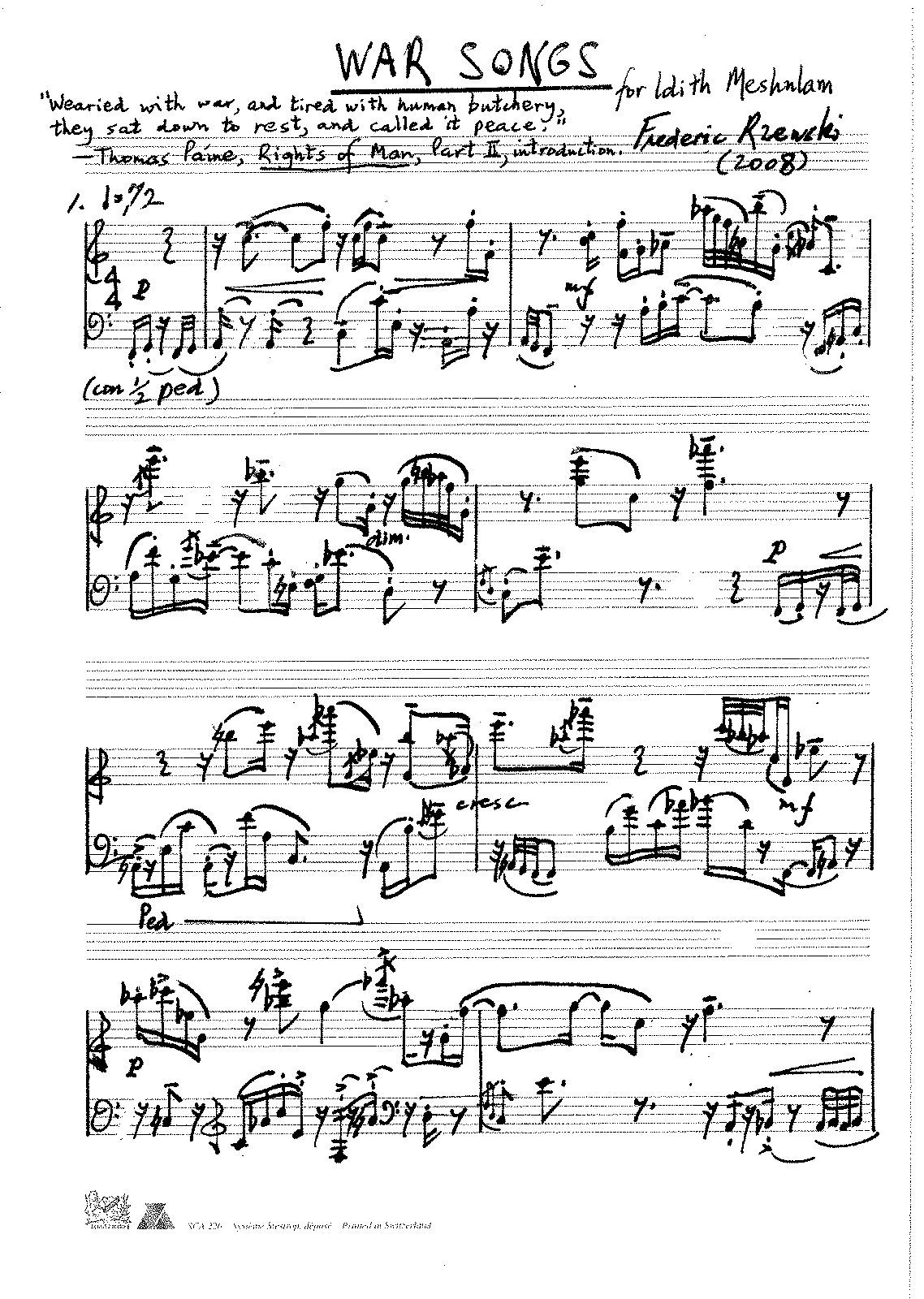 The first page of the manuscript of War Songs, another urgent title from Frederic Rzewski.

Edelstein: Sometimes a title touches me, stays with me, and allows me to be moved somehow more deeply by a work of music (along with the performance and production). I remember feeling this way about Milton Babbitt’s Philomel and about David T. Little’s Haunt of Last Nightfall. And I remember feeling this way about Steven Mackey’s Heavy Light and Barbara White’s The Wound and the Eye. It must matter that I’ve spoken with or know these composers: I can hear their voices and feel something of their personalities in their titles that I also hear in their music.

But I have never met Philip Glass or Robert Wilson, and perhaps no title means as much to my grasp of the music as Einstein on the Beach. The title Einstein on the Beach concentrates a simple, straightforward meaning for me—as our idea of the universe was transformed from Newton’s conception to Einstein’s there yet remains one fixed point: human love. But the expressing of this meaning—or more precisely, the feeling of this meaning—involved a long, complex, and ambiguous work of art in order that I felt the movement from stability to instability, felt the theory of special relativity, and felt gravity and grace in human love. One detail particularly illuminated the title: the seashell at the front of the stage with a spotlight on it. It’s Newton’s “I seem to have been only like a boy playing on the seashore, and diverting myself in now and then finding a smoother pebble or a prettier shell than ordinary, whilst the great ocean of truth lay all undiscovered before me.” At least one of Newton’s biographers says that he never actually saw the seashore.  A character in the opera picks up and listens to the shell and, I imagine, hears Einstein’s roaring, unstable, endless ocean of truth. And, in the end, a bus pulls up and we don’t drown. I do not think I would have felt the coruscating music and crystalline production in quite this way without the title.