There’s Still So Much to Learn, But I’m More Confident Now

The past year has been extraordinary for me. I didn’t imagine that my piece Likely Pictures in Haphazard Sky would have an interesting life beyond The Yale Philharmonia’s December concert. But in February 2017, I learned that I had been chosen to participate in the American Composers Orchestra Underwood New Music Readings and later in the spring, I received an invitation to attend the Minnesota Orchestra Composer Institute.

Early in 2016, one of my friends asked me to describe my career aspirations. Where do I see myself in five years, or in ten years?

I’ve always found this kind of question to be extremely difficult to answer. Careers and opportunities—especially in the world of classical music—can change so quickly, and sometimes quite arbitrarily. Often, planning and setting goals can seem like futile exercises. I’m always concerned that long-term planning will lead to disappointment, or will get in the way of larger opportunities.

So, in responding to my friend’s question, I kept my answer somewhat vague. “I want people to hear my orchestral music,” I said. “I want to write more of it, and I want opportunities for it to be heard!”

The past year has been extraordinary for me.

The past year has been extraordinary for me. Last November, I was attending rehearsals with the Yale Philharmonia as they prepared Likely Pictures in Haphazard Sky for a December performance. The concert program only consisted of new works for orchestra written by composition students at the Yale School of Music. I learned so much throughout those rehearsals—not only from hearing my own piece, but from hearing my colleagues’ music as well. I didn’t imagine that Likely Pictures in Haphazard Sky would have an interesting life beyond the December concert.

In February of 2017, I learned that I had been chosen to participate in the American Composers Orchestra Underwood New Music Readings. Later in the spring, I received an invitation to attend the Minnesota Orchestra Composer Institute. I now had opportunities to rethink sections of Likely Pictures in Haphazard Sky and make revisions.

At this point, Likely Pictures is a strong piece, and it’s also a practical piece. The musicians of both the American Composers Orchestra and the Minnesota Orchestra seemed to understand what it was about fairly quickly. After several revisions, the notation is very clear, and there are very few questions regarding my intentions. I have been present at every performance of my orchestral music; ideally, a conductor and an ensemble should be capable of assembling my music without my presence and input.

A conductor and an ensemble should be capable of assembling my music without my presence and input.

In the spring of 2017, I learned that I had won a commission from the New York Youth Symphony. This was extraordinary news—I was receiving my very first orchestra commission! In my application, I had submitted Likely Pictures in Haphazard Sky as my work sample. In a significant way, Likely Pictures had made this new opportunity possible. 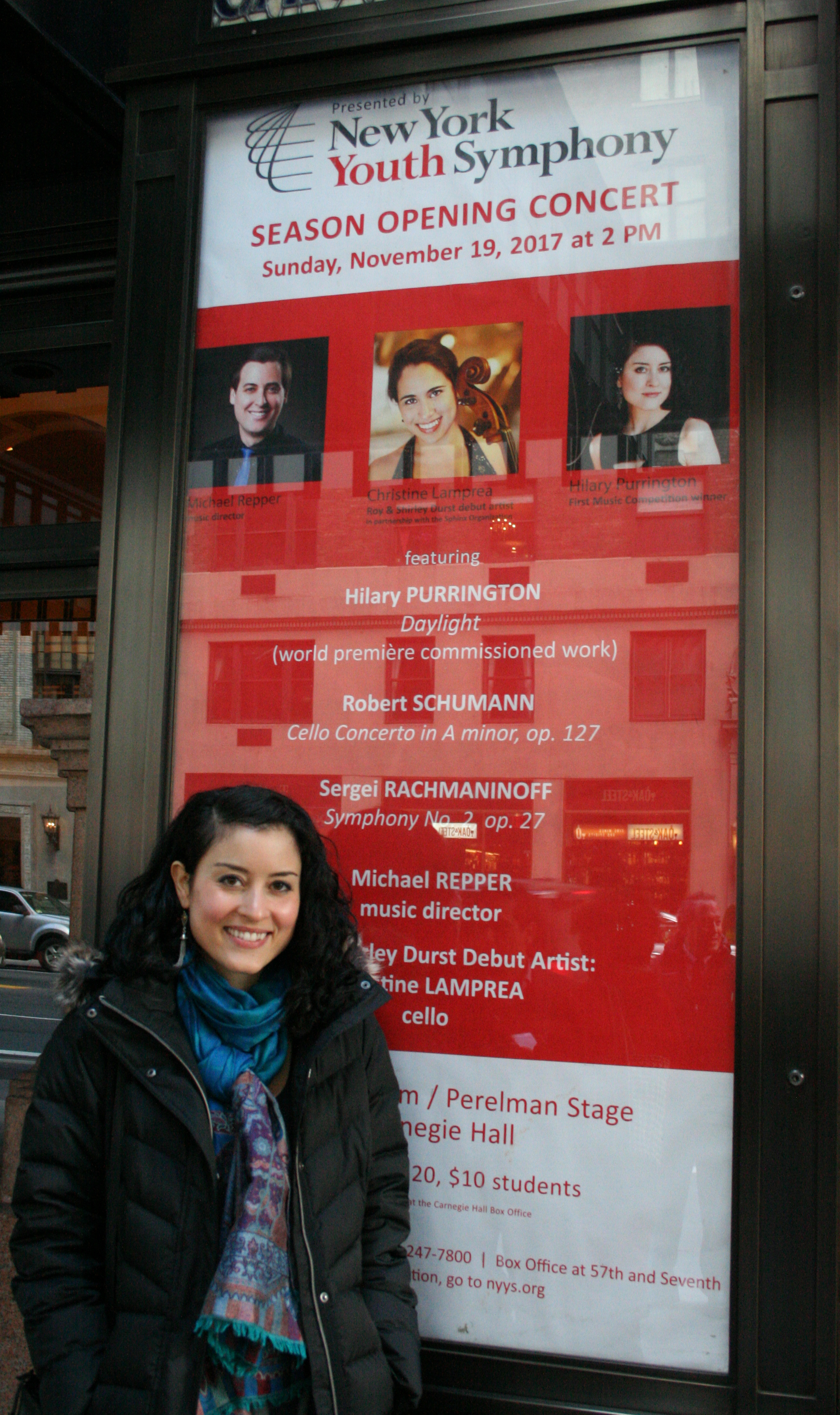 This past weekend, I heard the premiere of Daylights, my newest orchestral work. Commissioned as part of First Music, the New York Youth Symphony’s commission competition, Daylights literally opened the NYYS’s 2017-18 season. The work is a short, active concert opener. When I began composing it, I knew I wanted to create moments that capture the sensation of staring into a brilliant light. The word “daylights,” most often found as part of the expression “the living daylights,” is an archaic idiom referring to an individual’s eyes or consciousness. The title takes on many meanings—personal awareness and perception as well as the brilliant light of day.

Very often, my compositions come in pairs. I discover a sound or technique while writing one piece, and then I seek to improve upon it in a subsequent work. In a way, Daylights is an expansion of what I learned while composing Likely Pictures in Haphazard Sky.

As I explained in a previous post, early drafts of Likely Pictures were extremely episodic, and my transitions between sections were less than graceful. My teacher, Christopher Theofanidis, encouraged me to revisit these sections and compose elegant transitions. Chris taught me to be thoughtful and deliberate when writing transitional material, and this new, increased awareness has impacted everything I have written over the course of the past year.

Similar to Likely Pictures in Haphazard Sky, Daylights opens with a very sparse, delicate texture. The violins sustain very high, fragile harmonics, and a solo flute sings out a melody. I add glockenspiel, a second flute, and—eventually—solo violin and a very rude bass drum. In the final measures of the work, the music returns to a thicker, more active version of the work’s introductory, chamber-like material before blossoming into a noisy, active conclusion. In both Likely Pictures and Daylights, I contrast moments of intimate chamber music with expansive orchestral passages.

When composing Likely Pictures in Haphazard Sky, I experimented with combining instruments to create percussive, staccato “hits.” It’s a defining characteristic of the piece, and I chose to incorporate this element into Daylights (although, in a less significant way). In this case, however, the “hits” are orchestrated differently, and I usually use something to lead into these staccato punches. For example, in one passage, a crescendoing snare roll and solo flute terminates with pizzicato strings and a choked suspended cymbal. This is an example of how I grow artistically: I find a musical element or effect that I like, and I experiment with it in different pieces and contexts. It then becomes something that I can keep in my “repertoire” of sounds and ideas.

I’m extremely grateful for opportunities to continue experimenting and developing.

Following the American Composers Orchestra Underwood New Music Readings this past June, I learned that I had been awarded the Underwood Commission. Every year, one of the UNMR participants is selected to receive a commission for a future season. This is an extraordinary opportunity and privilege for me, and it will be my first commission from a professional orchestra. And, this opportunity is arriving at an interesting time for me, both artistically and professionally. I have learned so much about orchestral writing over the course of this past year. I’m a lot more confident in my ability to compose for orchestra, and I have so many ideas I want to hear realized. I also recognize that I still have so much to learn, and I’m extremely grateful for opportunities to continue experimenting and developing. 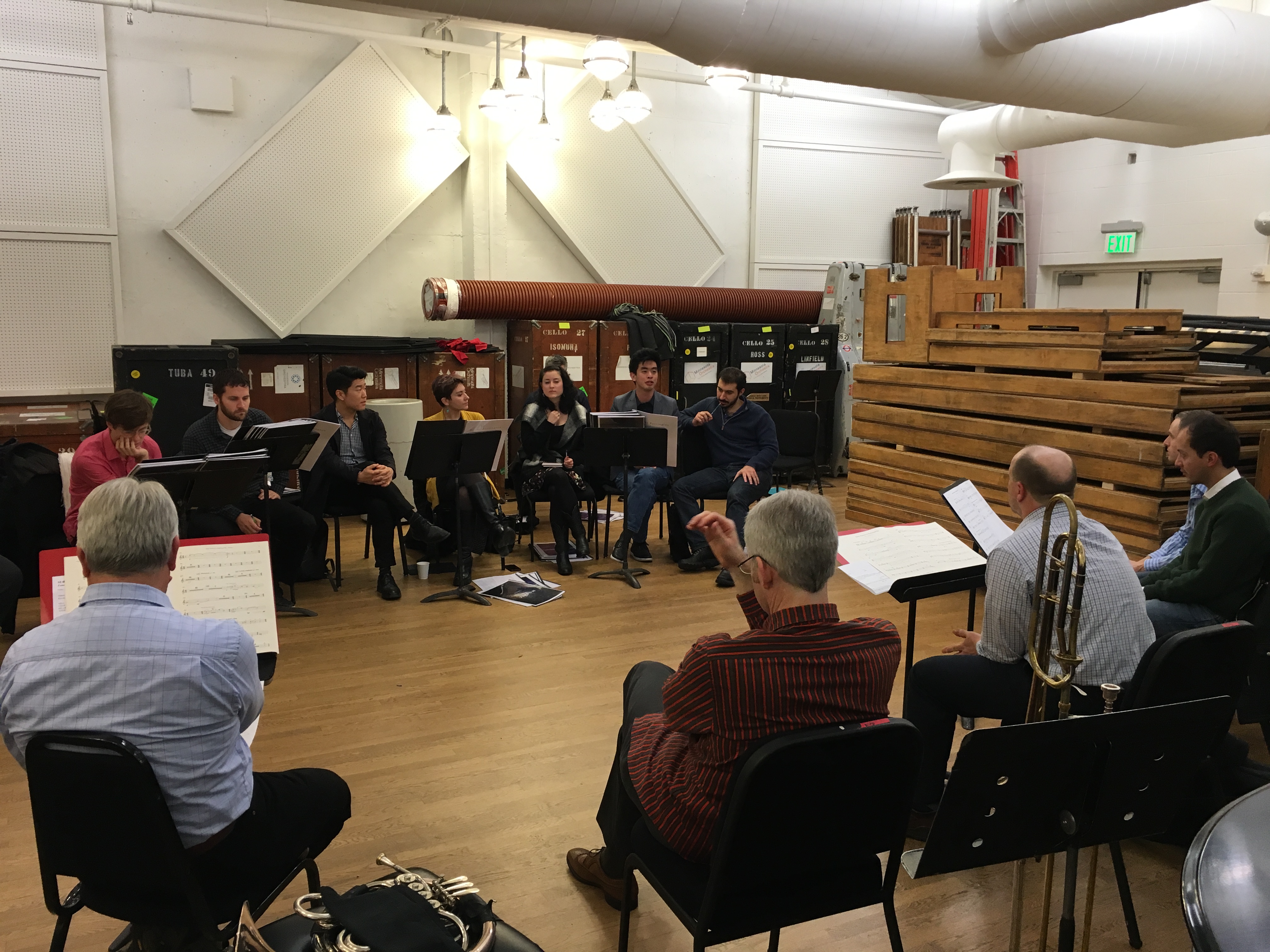