The Science of Sound and Tunings

As a composer, what drew me to use scales that have more, or less, notes per octave than our standard twelve-tone tuning–or xenharmonic music–was the boredom that crept up on me over the years of using the same twelve notes over and over, plus a curiosity about other possible tunings and what emotional chords they might strike.

As a composer, what drew me to use scales that have more, or less, notes per octave than our standard twelve-tone tuning–or xenharmonic music–was the boredom that crept up on me over the years of using the same twelve notes over and over, plus a curiosity about other possible tunings and what emotional chords they might strike. Many xenharmonic composers are driven by the artistic urge to break down arbitrary barriers of creative expression. And many who are mathematically inclined explore the vast possibilities of xenharmonic tunings because the mathematics is beautiful.

In order to appreciate anyone’s desire to explore the world outside of the common twelve-tone tuning, it helps to understand where this tuning standard came from and how it is somewhat arbitrary and not even mathematically pure. This calls for a short discussion of the science of sound.

Twelve-tone tuning is somewhat arbitrary and not even mathematically pure.

To start with, there is nothing special about any particular note or “frequency” (unless a person has absolute pitch). It’s all relative. That is, the relationships between frequencies are what matters. A musical interval is the difference in frequency–the ratio–between two notes, and the way two frequencies interact has special mathematical and psychoacoustic qualities.

The simplest and purest vibration is a single sine wave frequency. Sine waves are common in electronic music. Very low-pitched sine waves are often used as “sub bass” and high sine waves add “sparkle.” However, most sounds contain multiple sine-wave frequencies combined into a complex waveform. Think of tossing differently sized rocks into a pond and observing how the waves combine into an intricate pattern. Some waves reinforce to create larger ones, while others cancel out. Sound combines in this way, whether through air pressure waves interacting, or fluctuating voltage adding and subtracting in a digital mix.

Any sound that we hear, whether “musical” or not, can theoretically be broken down into individual sine waves. But most musical instrument sounds are pitched, and this is because they naturally vibrate at whole number multiples of the main frequency, creating the harmonic series. Any sine waves that fall in-between the neat and tidy harmonics are perceived as noise elements, which is not necessarily a bad thing. The “noise” might be the scrape of a violin bow, or the hammer sound of a piano key, or the pluck of a guitar, or the grit in a synthesizer sound.

As a typical illustration of the harmonic series, think about plucking a guitar string. The entire string vibrates back and forth at a certain speed (the fundamental frequency), and we perceive that vibration as the pitch of the note. At the same time, the string also vibrates in halves, thirds, fourths, fifths, and so on. This series of higher and higher frequencies, at shorter and shorter wavelengths, is the harmonic series. 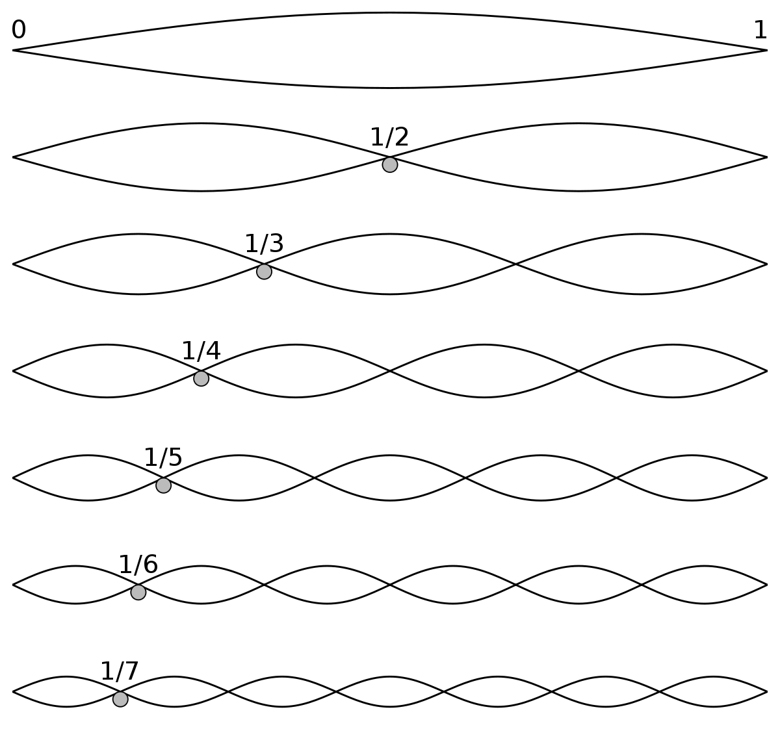 We don’t have to probe very deep into the harmonic series to see a fundamental relationship to our historical musical preferences. If we approximate the first dozen harmonics on a staff (Figure 2) or piano keyboard (Figure 3), we can quickly see some standard musical relationships. I say “approximate” because the harmonic series doesn’t perfectly align with the intervals in our twelve-tone tuning. If you have a piano handy, try playing these harmonics. In fact, you can do this on any instrument as long as it has a range of a few octaves.

The intervals between the first several harmonics are a very solid basis for our tuning, but the series continues with smaller and smaller intervals ad infinitum. Once we get past the 18th harmonic, the intervals become microtonal, meaning smaller than half steps.

Figure 2. An approximation of the harmonic series on a musical staff, starting with C up to the 12th harmonic.

Figure 3. An approximation of the harmonic series on a piano, starting with C up to the 12th harmonic.

If we begin with a low C (32.703 Hz) as the fundamental frequency, then an approximation of the first seven harmonics would be the notes C1, C2, G2, C3, E3, G3, Bb3. Just these first five harmonics alone when transposed into the same octave range are enough to build a Major triad–C/E/G–the most used chord in all of Western music. Using the first seven harmonics allows us to build a dominant 7th chord–C/E/G/Bb–the chord most often used for an ending cadence leading into a Major triad.

It’s nontrivial that the first and second harmonics are an octave apart. An octave has the strongest psychoacoustic relationship of any musical interval. It is an extremely interesting musical phenomena that octaves sound like higher and lower versions of the same note. Our twelve-tone tuning is “framed” by this very special interval, as are most (but not all) xenharmonic tunings. This is why our standard tuning includes twelve notes “per octave.” Notice that every time the harmonics double in frequency (harmonics 1, 2, 4, 8, etc.) we have another octave.

The second and third harmonics form an interval of a fifth, which is the next strongest interval to our ears after the octave. Fifths frame our triad chords, and the cadence that I mentioned earlier “resolves down a fifth,” meaning that the root notes move down a fifth interval. The third and fourth harmonics form a fourth, the next strongest interval. The peaceful “Amen” cadence resolves down a fourth, which doesn’t sound as final as resolving down a fifth, but is still a strong cadence. Fourths and fifths are a staple for rhythm guitarists who often strum those intervals as a musical pedal.

The seventh and eighth harmonics vaguely approximate a Major 2nd (a “whole step”), and the same goes for the next few harmonics, although by slightly smaller intervals each time. The eleventh and twelfth harmonics vaguely approximate a minor 2nd (a “half step”), although it is quite a bit larger than the half steps we use in our twelve-tone tuning. Harmonics 17 and 18 come closest to approximating our standard half step. After that, the harmonics form smaller and smaller microtonal intervals that were simply not chosen to be part of our musical scale.

So, with the first several harmonics transposed into the same octave range, we get these scale degrees: C, __, __, __, E, __, __, G, __, __, Bb, __, C. There are other interval relationships that played a part, such as harmonics 5 and 8 which form a minor 6th (E to C). If transposed down to the root note, we get C to A. Adding the A to our scale then reveals another whole step between G and A, reinforcing the idea of a whole step, and so on. It was found that chopping a whole step into a “half step” was close in pitch ratio to the 17th and 18th harmonics. This interval could somewhat neatly fill in the remaining blanks to form our twelve-tone scale of half steps–C, C#, D, D#, E, F, F#, G, G#, A, Bb, B, C.

Well, almost. We don’t end up with equally sized half steps if we keep the pure harmonic ratios that originally inspired the scale. By around 200 years ago, the scale intervals were adjusted and “evened out” so that every half step had the same frequency ratio of 1:1.05946–not exactly a simple or ideal ratio. This is called “equal temperament,” and it’s how our modern pianos are tuned. It is quite useful in enabling a person to play a song in any key, and to transpose chords during the course of a song without the worry of clashing intervals.

Twelve notes per octave was probably the best decision for the time, especially considering that it simplified instrument building, yet had plenty of notes for creating a wide variety of expressive musical styles. But just as the ears of average people have adjusted to more and more complexity and variety in musical chords, styles, timbre, and rhythm over the millennia, we can now add new tonalities to the list.