When looking back at 2001 for its musical significance, all I can say is that music is ultimately what kept us going when the events of September 11 unfolded in New York City.

The horrific events of September 11 are what most people are likely to remember from 2001, but many other things happened during those twelve months that irrevocably changed the world as well. In November of that year, the People’s Republic of China was finally admitted into the World Trade Organization. In April, the former and last president of the Federal Republic of Yugoslavia, Slobodan Milosevic, finally surrendered to Serbian police and was transferred to the Hague to be tried for war crimes—which, perhaps more than any other single event in the 20-year war that led to the dissolution of Yugoslavia, symbolized one of the most significant geopolitical shifts in Europe since the end of World War Two. (It is only trumped by the dissolution of the Soviet Union.) And in February, the Taliban began destroying the Bamiyan Buddhas in Afghanistan—at the time a marginalized event which, with hindsight, was perhaps the clearest sign that extremism had reached a new level that was a danger to the whole world. Also in April of that year, the Netherlands became the first country where same-sex couples could legally marry (although two same-sex marriages performed in Ontario in January of that year, which were initially denied registration, were subsequently upheld in a June 2003 court challenge). Plus Wikipedia went online, Microsoft launched Windows XP (less than two weeks later the US Justice Department abandoned their attempt to break up Microsoft), and Apple introduced the iPod. 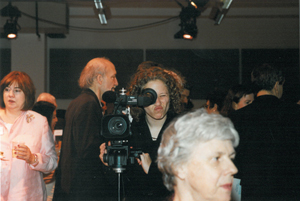 Wherever we went in 2001, Amanda MacBlane was always behind the camera.

Looking back at that cataclysmic year for its musical significance, admittedly, seems somewhat trivial, and contemplating where NewMusicBox fit in to that musical significance runs the risk of navel gazing.  But all I can say to that is music is ultimately what kept us going when the events of 9/11 unfolded in New York City. Something didn’t seem right before I headed out to the office that morning.  The radio I had on at home to check the weather suddenly went dead. As I walked toward the office, throngs of people were walking up 6th Avenue and I saw a huge fire at the World Trade Center which was clearly in view—it was a cloudless day. When I got online, I checked news and heard reports of a plane crashing into WTC. It was awful, but I continued working on something NewMusicBox-related. We were, as always, on deadline.  But then the second plane hit. We were offline. Molly Sheridan and our then-production coordinator Amanda MacBlane arrived at the office, and we tried to tune into whatever radio station had news. Then a strange silence descended on the city that was supposed to never sleep. At the time I lived four blocks away from the office, so I went home and took anyone at work with me who was afraid to go anywhere else.  Other people in our office braved walking home, venturing across bridges to outer boroughs in order to do so. The subways system had been shut down at that point. Soon all entrances in and out of New York City would be closed off as well.  There was so much to do, yet there was nothing to do. The following day is one of the strangest I have ever lived through. No one I knew went to work.  Weather-wise it was another lovely day. I remember walking through Riverside Park and seeing tons of people walking about like it was a summer weekend. But it wasn’t. The energy was tense. It was surreal. The next day we all went back to work and tried to think past it. As soon as we were able to get back online, we published a special September 11 edition of NewMusicBox which included first-hand accounts from people in our community who were based near Ground Zero like Stephen Vitiello, who had been a composer-in-residence at the World Trade Center, and La Monte Young and Marian Zazeela.

And the new music community responded to these horrific events by doing what it does best, it went on creating and performing new music. A ton of new repertoire now exists that was created as a direct artistic response to this tragedy. One of those works, John Adams’s On the Transmigration of Souls, which received its world premiere by the New York Philharmonic on the one-year anniversary of that fateful day, went on to win the next Pulitzer Prize for Music (the first work by a composer who had composed minimalist music ever to do so).
But I also have some unconditionally positive memories from that year, like the first Minnesota Orchestra Composer Institute (which hopefully will come back now that the strike is finally over, but who knows) and Pierre Jalbert becoming the first American composer to win the Masterprize competition. (Remember Masterprize?) I still tell people about my chat with the youngest composer ever to get the full interview treatment on NewMusicBox as well as the day I tried to explain hip-hop to Milton Babbitt. In what hindsight reveals to be a harbinger of things to come, I also remember when the first big name composer put all his scores online for free. And then there was the just plain weird stuff like the Tristan Foison plagiarism scandal which some folks were still thinking about a year later. 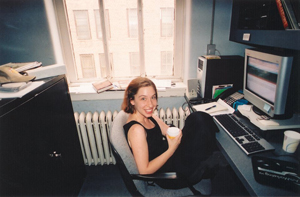 One of the rare photos of Molly Sheridan (photo by Richard Kessler).

But I have an additional very positive NewMusicBox reminiscence from 2001 that for me at least trumps all of the more unpleasant memories.  I remember reading a fabulous article in Symphony Magazine that was about taking three indie-rockers to attend concerts by a symphony orchestra and describing what their reactions were. The article persuasively argued that, though it was quite a culture clash, it should not have been and that the orchestra needs to find a way to reach and serve this community. It struck a chord, so I sought out the author of the article—Molly Sheridan (then a member of the staff at Symphony)—and had lunch with her. That was on May 23, 2001. Slightly over a week later, on Friday June 1, I asked her to join me on the editorial team of NewMusicBox. She wanted the weekend to think about it, but instead I asked her to accompany me to an all-American new music concert that members of the St. Luke’s Chamber Orchestra were giving the following day. It was part of St. Luke’s “Second Helpings” series at the DIA Arts Center; this program featured music by Elizabeth Brown, Mario Davidovsky, Julia Wolfe, and Tan Dun—quite a mix. It was a fabulous concert. I remember introducing her to all the composers at the reception afterwards.  How could she say no to this gig?  She didn’t, and now 13 years have gone by. Yeah, she went off to Nepal at some point (that’s a story for another time), but she came back and is still with us. It’s been an extraordinary odyssey.

“Music can do things words can never do,” remarked Leon Botstein in the days following September 11, 2001. Few reading these pages would disagree with that statement, and yet we continue to read and write about our music, our careers, and the challenges we face. Perhaps it is precisely these challenges, both internal and external, that intensify our need to keep the conversation on NewMusicBox alive.

During our 15th anniversary celebration, join the more than 120 individuals who, this past year, have already donated or pledged their support to keeping our community strong.