The Hand-Off
NewMusicBox
Written By

Even in cases where I have met frequently with performers during the composition of a piece, something about the medium of notated music seems to necessitate a certain amount of reclusion. The other athletes wait anxiously by the first checkpoint, crossing their fingers and hoping that the composer is on time while they remain unable to do a whole lot until the composer shows up. 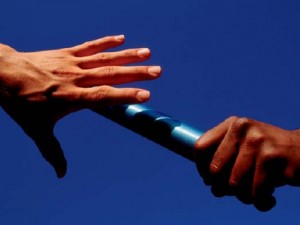 It’s a long journey from a new musical work’s conception to its successful realization, and all the more so for composers who notate their ideas for others to perform. For most concert works, this journey is like a marathon in respect to the requisite amounts of fortitude, endurance, and patience; yet it is also like a relay, in that the journey represents the combined efforts of several parties and could not be completed by any one of them alone. And just as in running a relay, it’s the handing-off of the baton between each leg of the race that is often most crucial for the ultimate success of all parties.

In the first stage of the New Music Relay, the composer becomes the baton bearer almost exclusively; there may be some preliminary back-and-forth in order to set the opportunity in motion, but then it’s the composer’s race to run until the piece has been completed (and safely extracted from his or her composing lair by the performers and presenters)! This can often be a terrifying leg of the race for the others to wait through, because the composer of notated music is working essentially in private. Even in cases where I have met frequently with performers during the composition of a piece, something about the medium of notated music seems to necessitate a certain amount of reclusion. The other athletes wait anxiously by the first checkpoint, crossing their fingers and hoping that the composer is on time while they remain unable to do a whole lot until the composer shows up.

In the second stage of the race, the performers begin to pry the music from the composer’s hand, but the hand-off is rarely accomplished so quickly as in an actual relay race. The performers are eager to get their hands on the music, but they are still extremely reliant on the composer almost as if he or she were a guide shining light on the path ahead. The farther the performers proceed down this path of learning the new piece and its quirks, the less reliant they become on the composer. The midpoint in this changing relationship is often the first rehearsal with composer in attendance; then the performers are well on their way toward securing their newfound grip on the piece, with little or no additional input from the composer.

While these are not the only participants involved in the race, the remaining contributions of presenters, commissioners, publicists, and the like do little to affect the basic arc of the process, in which there is a gradual transfer of power and responsibility from the composer to the performers. And as a side note, this is also one of the reasons that writing a lot of music and trying to approach performers later on can often be such a headache for composers—once an ensemble agrees to a performance, they are invested in it and it is perhaps the one time that the composer holds most of the power over that eventual outcome. When beginning from a finished piece, the ensemble has the most power to shape the outcome since the bulk of the composer’s work is already completed, and this may affect the degree of input the composer is allowed in shaping the performance. That said, it’s not uncommon for composers—who ran the first leg of the race and proudly passed off the baton—to feel a little left in the dust while others crash through the finish line.

In my very short career, I’ve known performers who abused this paradigm for their own interests, although happily only rarely. Usually this has involved changes to the score made without my consent, or in one case the demand that I re-title a commissioned work. But there have certainly been cases in which I tried a performer’s patience, unintentionally, intentionally, or half-intentionally, knowing that given the choice between pulling the new piece entirely and allowing me some extra time, the performers would have to put up with my own excesses for a while longer. Nowadays I try as much as possible to respect the people on the other end of the equation, not least of which because it sets a positive tone for the performers to match. Bringing new music to life is a team effort, and our individual contributions become blended and yes, harmonized in an outcome of which we all partake.