The Gift of Original Music
NewMusicBox
Written By

The Gift of Original Music

Composers have been dedicating works to performers, commissioners, teachers, and colleagues for ages, but what about music that is not necessarily intended for public performance, such as a lullaby for a newborn? 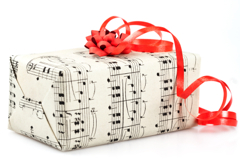 I’m in New York this week for a number of events and meetings, one of which was the retirement party of former American Music Center CEO Joanne Hubbard Cossa. She received one of the most amazing gifts ever—a beautiful box containing handwritten miniature compositions from many artists associated with AMC over the years. Some were written especially for her to commemorate the occasion, while other composers contributed little excerpts from sketches and scores of previously composed works. All included short notes and were signed by the artists. It was fascinating to look through them and see the diversity of composers represented, the distinctive traits of everyone’s manuscript, and of course the actual music they wrote. It’s the sort of thing I would probably pull off the shelf every evening before bed to look through for pre-slumber happy inspiration.

Composers have been dedicating works to performers, commissioners, teachers, and colleagues for ages, but what about music that is not necessarily intended for public performance, such as a lullaby for a newborn? Most of my own compositions are dedicated to a musician or ensemble, and although I’ve often thought about writing a short piece of music simply as a gift for a friend or loved one, I’ve never really followed through. The idea of a snippet of handwritten music (or a recording of a short work, if notation is not your cup of tea) seems like a fun and completely manageable task, as opposed to a fully formed, engraved and bound composition, which feels more daunting, and possibly overwhelming for the recipient. How does one reciprocate—especially if one is not a musician—the gift of a musical score? There are few things I enjoy more than pouring over scores and sketches by other composers; in fact, I find handwritten sketches almost more interesting than a formal score—those materials reveal so much about any sort of artist. So the gift of a bit of music would probably be quite a cherished item for someone who is interested in music.

Composers, have you written music as a gift for someone? What were the circumstances? And if anyone out there has ever received home grown music as a gift, know that even a small thing is actually a very significant thing; that person really cares about you!