How does a nearly forgotten Baroque instrument generate a wave of connection through the antipodes of the world in 2020?

On this last January 1st many of us (including, most obviously, me) were cheering to the new decade, the return of the Roaring Twenties, to a year charged with bearings of hope of change, evolution, liberation. Our expectations were far more glamorous than PJs and Zoom with a pinch of confined existentialism. 2020 took the most dramatic stumble in its incipit, from which it seems to not be able to recover yet, as in one of those grandiose slips down the stairs that keep bouncing you down and down for an apparently infinite time. And yet, the stubborn beauty that forces itself out of any circumstance has revealed itself in the form of resilience, connection, and creativity – despite the situation, or most probably because of it.

The experience I had through my living-room-directed Flauto d’Amore Project during the pandemic lockdown has been a journey of overwhelming inspiration, and of constant wonder.

When I began the Flauto d’Amore Project in 2018, my goal was to bring new life to an instrument that fell into the cracks of history in the 19th century, and lost its opportunity at any modern or contemporary repertoire. Considered the true voice of flute playing by J.J. Quantz, who in his monumental Versuch on woodwind playing writes that the sound of the flute “should resemble the voice of the alto rather than the soprano, and mimic the chest sound of the human voice,” the flauto d’amore was a companion instrument to the viola d’amore, oboe d’amore, and even the clavicembalo d’amore that were all the rage throughout the 17th and 18th centuries. It was beloved and regularly utilized by major Baroque composers (François Couperin, J. S. Bach, Telemann, Graupner, and Hasse to name a few), as well as by Romantic salon virtuosos. One of the most mesmerizing dances from Aida was scored by Giuseppe Verdi for three flauti d’amore (in 1871!).

The flauto d’amore lived on for centuries thanks to its fascinating, unmistakable sound, and yet, just as great artists at times unjustly fade away from the memory of the public, this instrument’s popularity waned as the flute system revolution occurred toward the end of the 19th century. Theobald Böhm, the father of the modern flute, invented the alto flute in G, which ended up replacing the flauto d’amore in the general flutist’s arsenal, despite its very different characteristics.

It takes visionary minds to bring new life to buried potential: in 1989 the vision of Italian flute scholar Gian-Luca Petrucci (if you are noticing a last name correspondence, yes – it is my father), and that of Albert Cooper, a legendary flute artisan of the 20th century, came together, and the flauto d’amore was reborn, through the very first modern system prototype, dreamt up and designed to give new resonance to a long muted voice.

The Flauto d’Amore Project was created in synergy with composer Nathan Hudson with the goal of creating a space for direct collaboration between composers and performers in the exploration of a sound that had, so far, no precedents in new music. It became clear from the very start that the most unique element of this initiative would have been the feeling of mutual wonder at the discovery of the potential of the instrument in the most disparate genres and styles. Working closely with wildly different composers for the mapping of an elusive instrument, a totally uncharted territory, yielded results that bewildered performers, audience, and often the composers themselves.

With the wildfire quality of good ideas, this one sparked up on the New York subway, on a bumpy evening ride on the uptown A train. By the time my final stop came, the structure was there, and in the morning we started making calls. We looked at the composers who were closer to us, those whose intellect and craft we most respected, and who we’d know would sit down to listen to what in the years became to be known as “The Spiel” – the explanation ab ovo about the instrument etc., which you have in fact just read in digital form. We gave the very first rough version of The Spiel to Gleb Kanasevich, Max Grafe, and Liliya Ugay who, together with in-house Nathan Hudson, formed the OG pioneer group in the exploration of the instrument. The first premiere recital happened a few months later, and offered the NY audience a very first taste of a new sound through four entirely different lenses. Since then, we have added to our roster of composers Erin Rogers, James Young, Nirmali Fenn, Clint Needham, Howie Kenty, Chris Bill, Flannery Cunningham, Sunny Knable, Roger Zare – and across the pond Italian composer David Fontanesi, who scored the second movement of his Academic Concerto for flauto d’amore. 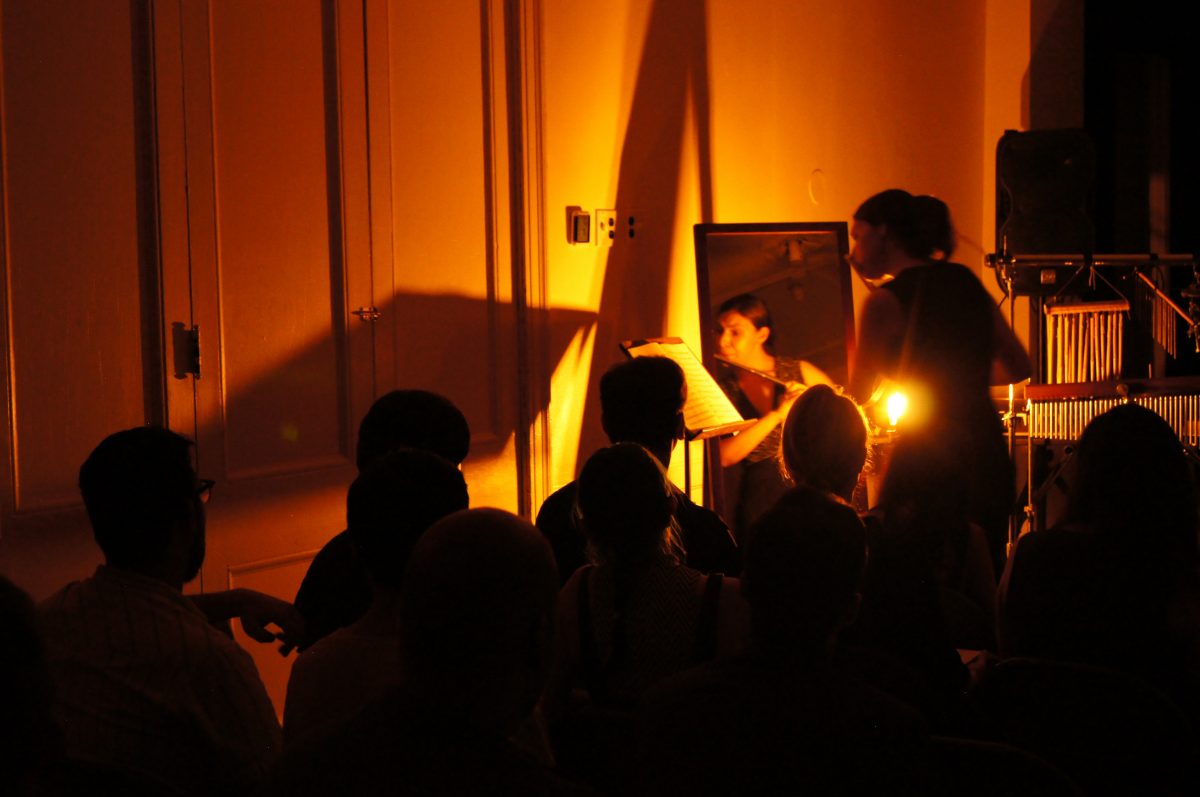 Back when there were live in-person indoor concerts.

When the pandemic hit, we wanted to have this instrument become a communal element for artists stuck in their studios all over the world to find creative stimulation, and to come together through a remote collaboration to explore something new, removed in so many ways from their physical reach, but present in their imaginations as a trigger of exploration.

In mid March we launched a call for scores through social media, asking that composers with no limitations in age, geography, background, style, or education write a 1-2 minute piece for flauto d’amore, pledging I would record and premiere them within 48 hours of receiving them. Here we saw the unexpected happen – yet another unexpected in the year of expectation-shattering: we had over 30 artists from all over the US, as well as from the heart of Europe and all the way from Thailand shower us with pieces – which made for a very busy month of daily video-recording and premiering. (Since I recorded all pieces on a rolling basis, I was able to premiere a piece every day!)

In their inherent differences, the pieces all showed a yearning for the creative process, for new inspiration, and for the experimentation of a sonic ground unexplored, non experienced, remote in all senses – but enticing, captivating, challenging, desired. We had established composers such as Joe Sferra from SUNY Potsdam, Italian academic scholar Federico Favali, Iranian-born Rouzbeh Rafie, David Mastikosa from Bosnia-Herzegovina; with Eric Malmquist we envisioned a remote-duet for Baroque and modern flauto d’amore, which we put together with Leighann Daihl Ragusa who owns a Baroque flauto d’amore (still in A, but tuned at A=415 Hz). We had a cohort of talented composers from Bangkok (miracles and mysteries of Facebook algorithms!). We collaborated with Lebanese poet Hyam Yared for Marco Buongiorno Nardelli’s electronic piece based on her work and featuring fragments of her recitation. We joined forces with the New York Composer’s Circle for a feature collaboration with selected composers from the collective. We even had a little venture into blues with a composer offering their original tune for flauto d’amore, trumpet, and bass.

Receiving, practicing, recording and premiering this outpour of works in a time when physical movement was confined and our mind felt compelled to reimagine its potential within constrained boundaries, has been one of the most inspiring experiences of our careers. The sense of invisible connection with artists at the corners of our suffering globe, coming together through one communal element, connecting their energies to create some beauty at times of hardships, has made me (and I would say, all of us) feel more “together” than we would have felt during normal times. The feedback we received from a great number of the composers involved in this project showed that relief was offered and absorbed, energies were exchanged, beauty and hope were created. 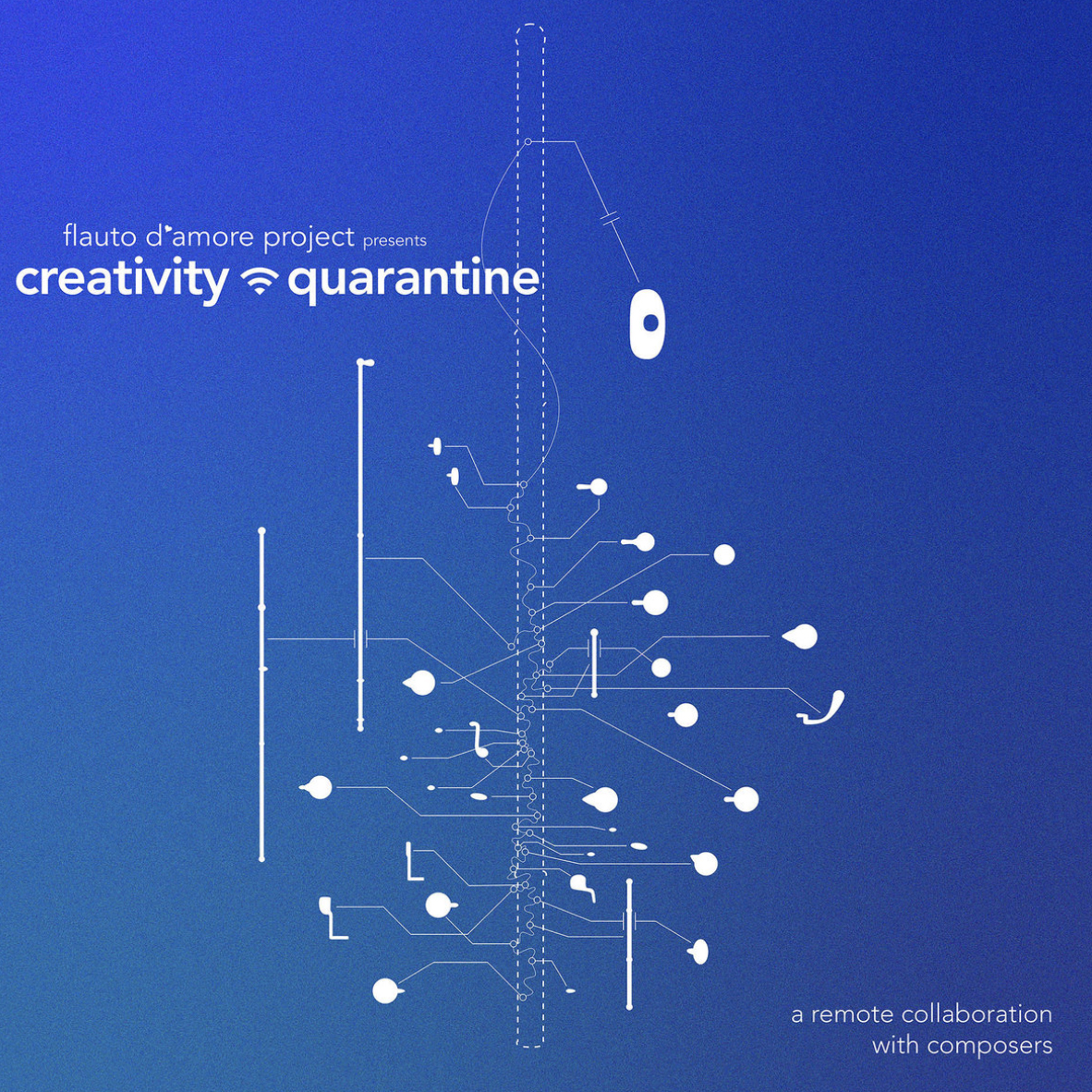 Once we closed the call for scores, we re-recorded all the pieces in higher audio quality in order to issue two Bandcamp albums, Creativity Quarantine Volumes I and II. We donated the proceeds from the two albums to the New Music USA Solidarity Fund, and proceeded then to publish a vast selection of the works in two collections for the Flauto d’Amore Editions, so to make this music available to a wider public (including versions for standard flute and alto).

During the same period we also had a chance to take part in Gabriela Lena Frank’s initiative #GLFCAMGigThruCOVID, where I had the luck to be paired with the wonderful composer Aida Shirazi, whose style and aesthetic really shone in her “Miniature” for unaccompanied flauto d’amore.

The arts community has come together in ways that would have seemed far fetched if discussed over our last New Year’s Eve champagne toast. It was – it is – an uproar of desire of making art to erase, to elevate, to heal, to empower. The New Twenties are still roaring after all.

The flauto d’amore looks almost identical to a regular flute, if you disregard the slightly larger size.