The Collaborative Studio: Roles and Expectations

Working in a studio environment has been one of the most beneficial experiences in my musical development, and I want to encourage musicians to take full advantage of the possibilities of a truly collaborative studio environment.

For many classical/new music projects, the recording process is seen as a conclusion—the culmination of hours of rehearsal and preparation. Instead, your time in the studio can be utilized as another collaborative opportunity to further refine a project and prepare the work for a life both within and beyond a performance. On multiple occasions I have entered a studio feeling fully prepared to record the tracks as I had written and known them for months, only to be enlightened to new possibilities and ideas from a producer or engineer. The recording studio is its own creative space that provides a new perspective not only from the process of recording, but also from the team involved in that process. Taking advantage of this unique environment can be liberating and has the potential to elevate a project to another level that may have been previously unknown.

My background as a musician began like it does for many other people: playing in bands with friends. I was a guitarist in a variety of different rock, metal, and hardcore bands as a teenager, and was fortunate enough to get the opportunity to record three albums with one of those bands. It was then that I had my first experience working with an experienced producer. Over the course of those three albums, I absorbed as much knowledge as I could about the studio experience—everything from workflow, expectations on both the performing and producing end, studio techniques, and any secrets of the trade that I could remember. These experiences stuck with me because I enjoyed the process of working in a studio, although at the time I couldn’t imagine that I would do anything other than write and perform the music. Eventually, in college, I began composing concert music, which provided me not only with a new skill set, but a fresh perspective on music entirely. The communal aspect of music-making disappeared as I continued to compose, but I was suddenly involved in all determinant aspects of how a piece would sound and be performed. These varying experiences would eventually coalesce to inform my role as a producer, a new step in my development as a musician.

The definition of a producer can vary from person to person and for each project, but there is a certain foundational mission that you can expect to be a constant. Producers help artists achieve their vision for their work. They guide the way and keep artists on track and productive while also offering outside opinions—sometimes even providing creative input. While all producers have their own strengths and tendencies that define their production style, a critical attribute of their job is the ability to decenter themselves and put artists first in their decision making. 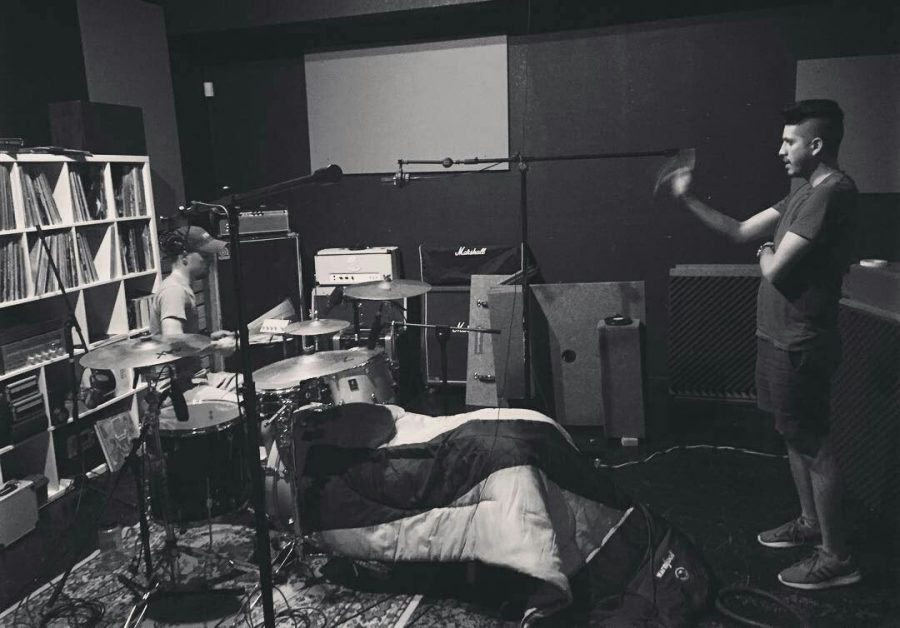 This decentralization of personal artistry can be difficult, but it has personally transformed my creative process into a much more collaborative effort. When I first began playing music, it was a way to spend time with friends and share something together. Becoming a composer changed all of that, as the creation process became solitary. The primary aspect of producing that drew me in was the ability to collaborate again, yet this time in a supporting role rather than as the central creator. Working as a producer taught me to trust in the people I was collaborating with. This practice bled over into my compositional process and has given me a new sense of comfort in communicating and workshopping ideas with my performers. Just like a performance of a concert work, a studio production involves a team, and clear communication founded on trust is crucial to achieving the desired outcome.

Just like a performance of a concert work, a studio production involves a team, and clear communication founded on trust is crucial to achieving the desired outcome.

In a modern studio session there are three primary roles: the performer, the engineer(s), and the producer. In a best-case scenario, these roles are fulfilled by different people. It has become the norm, however, for one person to embody two of these roles. Often you will find that an engineer will also serve as a producer. This is a stereotypical assumption by the general public, but in the modern age it is not entirely out of line. I can recall my first experience in a professional recording studio and being confused about who the producer was because I was unaware that having a separate engineer was an option. In some cases, performers may even opt to produce the project they are performing in.

One reason, outside of financial limitations, that the producer for a project may also serve as the engineer or even a performer is that an effective producer often has a wealth of experience as an engineer and/or a performer. These varying experiences and skill sets contribute to the producer’s impact in the studio. Having been involved in projects where I wielded dual roles (engineer/producer or performer/producer) I can say that it is not easy. Although there are overlapping skills, producing requires the ability to move between perspectives continuously. Performers and engineers have crucial jobs to execute that rely on focus and detail-oriented technical skills. A producer, on the other hand, is constantly switching between focusing on these details and recognizing how the pieces fit into the larger picture of the project. A trusting relationship with a producer can alleviate the pressure of having to focus on all aspects of the process.

Throughout the remainder of this series I will offer up some suggestions on how to be an effective producer and collaborator in the studio for those who may be new to the studio process. I will also be detailing the ways in which my formal music training has informed my production style for non-classical music, as well as how my non-classical background has informed my production of classical music. Working in a studio environment has been one of the most beneficial experiences in my musical development, and I want to encourage musicians to take full advantage of the possibilities of a truly collaborative studio environment.