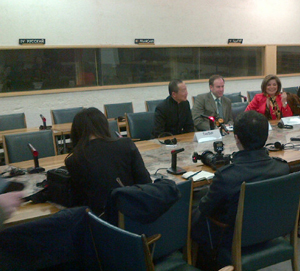 UNESCO Director-General Irina Bokova has designated composer Tan Dun as a UNESCO Goodwill Ambassador “in recognition of his efforts to promote intercultural dialogue through music, consciousness of the scarcity of natural resources such as water, and the diversity of languages, as well as for his dedication to the ideals and aims of the Organization.”

The announcement was made on March 22 during an event at UNESCO headquarters which began with a concert, organized in cooperation with Melody for Dialogue among Civilizations Association and featuring a performance by the Netherlands Symphony Orchestra of Tan Dun’s Music for Water conducted by the composer.

As a UNESCO Goodwill Ambassador, Tan Dun will join the ranks of celebrity advocates—including Nelson Mandela, Rigoberta Menchu Túm, Forest Whitaker, Susana Rinaldi, Herbie Hancock, Placido Domingo, and Jean Michel Jarre—who spread the ideals of UNESCO through their name and fame. They extend and amplify UNESCO’s work and mission and generously use their talent and status to help focus the world’s attention on UNESCO’s work.