Featuring sixteen quartet compositions chosen anonymously from among over 100 entries, the organizers of Golden Hornet Project’s “String Quartet Smackdown!” ran a recent concert like the last few rounds of the NCAA basketball tournament. Audience members voted on which quartet would advance.

How many times during a heated debate about chamber music have you longed for a pair of boxing gloves or perhaps a cricket bat? In the topsy-turvy world of new music, sometimes having a solid piece of wood in your hand can be quite useful. Long gone are the thoughtful, dispassionate discussions of historical significance and the careful dissections of dogma peppered with compromise. These have been replaced by heated accusations, wild ad hominem arguments, and other madness which, if allowed to continue unchecked, will not end well. I say we let the music duke it out and let the audience decide. Via text message. The organizers of Golden Hornet Project’s “String Quartet Smackdown!” clearly agree that the present state of musical debate requires an overhaul. Staid competitions with pedigreed judges be damned! We’ve got smart phones, strong opinions, and a fully stocked bar. Let’s get cracking. 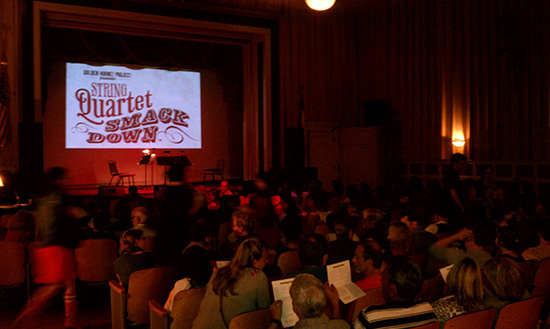 Featuring sixteen quartet compositions chosen anonymously from among over 100 entries, the Smackdown! was held at Austin’s Scottish Rite Theater, home to regular avant jazz shows as well as secretive, Masonic meetings. Set up to run like the last few rounds of the NCAA basketball tournament, the Smackdown! started with a “Sweet Sixteen” round in which the first minute of each quartet was played. Full disclosure: I had a piece in this competition. Its involvement was…brief. This was followed by an “Elite Eight” round with two minutes per piece performed, a “Final Four” with three minutes each, and the Championship in which the last two pieces were played in their entirety. The Tosca String Quartet took on the sizeable task of learning all sixteen string quartets in a few weeks and having each one under their fingers in the event that it reached the final round. One of the entrance requirements was that each piece needed to be right around four minutes (lots of single movements out there), but that’s still over an hour of new music to learn in a relatively short time. Tosca did a fantastic job, not only performing flawlessly but also avoiding having even a single page out of order or any other similar issue which could have easily thrown a monkey wrench into a presentation in which timing and solid performances mean the difference between glory and an early trip to the bar. They also managed to keep straight faces when at the end of each work’s allotted one, two, or three minutes, the gong which signaled “time is up” broke into the flow of the piece, cutting it short as required by the rules. This was funny at first (there used to be this t.v. show…), but after the first few thwacks it started to wear out its welcome. Fortunately, the timers backed off on the hits as the show went on.

Once the gong was struck, the audience was given a few minutes to text their vote and the results came up on a large screen behind Tosca. Watching the real-time “Battle of the Bars” was half the fun, and the audience reactions to contests close and not-so-close were chock full of “oohs” and “aahs.” In the interest of anonymity the quartets were all assigned numbers, one through sixteen, so one would see SQ1 -vs- SQ16 and so on. Unfortunately, I’m not sure that most audience members would be able to “put names to faces” with a given piece, so to speak. For instance, my piece went out in spectacular fashion in the first round, but I suspect that a few of the people who voted for it might have wanted to know who wrote it, and even though the names and titles of each work were included in the program and shown on the screen at the end of the competition, there was no correlation with the numbering system. An industrious audience member (or one with a notebook, pen, email communication with the contest coordinators, and modest research abilities) could probably dig up the facts, but letting people know whose piece was being played at a given time probably wouldn’t have had a huge impact on the voting and would have given said audience member an idea of which composer to check out the next day. 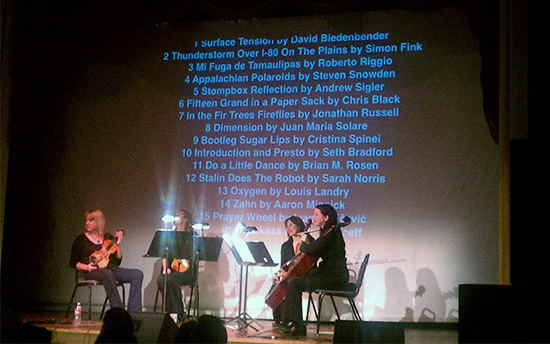 Hopefully the audience took those programs home and checked out all of the composers, because there were a number of wonderful pieces included in the show. The gentle introspection of Jonathan Russell’s …in the fir trees: fireflies, with its slow and quiet rising lines, offered a wonderful contrast to the rhythmic intensity and harmonic crunchiness of David Biedenbender’s Surface Tension. Despite its compelling use of pre-recorded materials slowly overtaken by the strings, Steven Snowden’s Appalachian Polaroids also went out in the first round, so I didn’t feel too bad about getting my card punched before intermission. Ruben Naeff’s Little JACKASS (originally JACKASS written for the JACK Quartet) was another strong work; odd time signatures gave shape to quiet high-register rhythmic figures which descended by and by and were joined by longer lines, still walking in lock-step with those asymmetrical rhythms. But in the end, there could be only one, and the catchy rhythms and strong melodies of Chris Black’s Fifteen Grand in a Paper Sack came out on top.

All in all the Smackdown! was a resounding success. It was well attended, and the diverse audience didn’t look to be new music regulars, which I contend is a good thing. As far as I could tell, no one left during intermission, which is a victory for any show. The fact that the audience played an active role in the proceedings coupled with relatively short pieces made for a presentation that was compelling and easily digestible. Given this, I wonder if at the next Smackdown! we could hear the pieces in their entirety from the get go? No one seemed anxious to leave, and while it would certainly add time to the event it would also let more slowly evolving pieces do their thing. (I’m not referring to my piece. It was pretty evolved by the time it got smacked by Sarah Norris’s Stalin Does The Robot).

I can see the Tosca’s reviewing their contract right now…