What on earth is going to happen to compositions that are painstakingly crafted for effective live performance at the time of their creation, but which become increasingly difficult to mount live, simply due to the march of time? 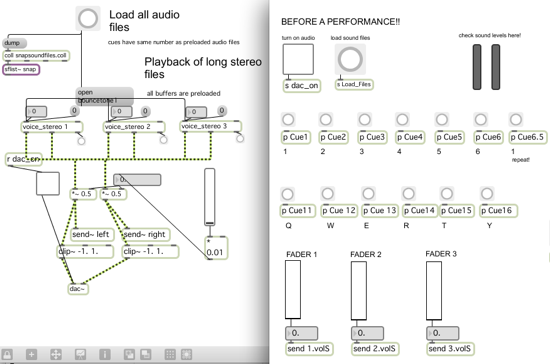 In preparation for a performance at an electroacoustic music festival this weekend, I’ve been revisiting a slightly older piece that hasn’t been performed in its live electronics version for a few years. Several updated releases of Max/MSP software have come and gone since I last fired up the interface for this piece and, as one might expect, when I tried it out for the first time, it didn’t work correctly. Fortunately the changes needed to get it properly up and running were small, but there was still a significant time suck involved. And indeed, unless I keep on top of software upgrades and changes, pieces that incorporate live electronics could end up hopelessly broken for no reason other than years pass and technology changes. The same is true for much older electroacoustic compositions that involve very specific pieces of gear—stomp boxes, synthesizers, a particular delay unit, or a drum machine.

Because the way I am using the software in the case above is relatively straightforward, I could easily transfer my performance system to more accessible commercial software like Ableton Live or Logic; certainly more people own those programs than Max/MSP, and it makes sense to do so, to ensure that the music continues to be performed. But eventually there will be different software that replaces those programs, and what will happen then? Chances are I’m the only one who is ever going to undertake such a conversion task, and when I’m not around anymore, the performance materials for these pieces may well turn to dust. It’s a question for anyone creating electroacoustic music. What on earth is going to happen to compositions that are painstakingly crafted for effective live performance at the time of their creation, but which become increasingly difficult to mount live, simply due to the march of time?

A good clarinetist friend has taken it upon himself to recreate a number of older electroacoustic works that were originally made using equipment that is no longer available. He has resuscitated Thea Musgrave’s Narcissus, for example, translating the electronics from a very specific gear list into a more modern software situation. But I seriously doubt many people out there are really willing to take on projects of that nature, and I worry for the life of a lot of truly wonderful music. David Tudor’s Rainforest can’t really be recreated (darn good thing there are recordings, though there’s no replacing the live experience), nor can so many other works that rely on custom-designed electronic gear or software. It’s not just an issue for works that are considered classics now; there are many, many artists making great work incorporating live electronic performance today that should be able to be experienced by people decades from now. How is that going to happen?

This is an issue for individual composers and publishers alike, since it’s not any easier for the big publishers to deal with the sale, rental, and distribution of live electroacoustic music. It’s difficult and inconvenient to wrangle performance materials of this type, no matter how you slice it. Although I know that publishers do not encourage (and may actively discourage) their composers to create electroacoustic music, what I would really love to see is some sort of technology manager/archivist position become standard at publishing houses in order to deal with these issues going forward. Because like it or not, a lot of contemporary music involves technology.

Another argument could be presented that addresses the sheer volume of creative work that is being produced at this time. Should this music even be preserved for continuing performance? Is documentation in the form of audio recording and/or video enough? There is so much of everything. It’s easy to dismiss work and not be uncomfortable with its erasure because of the volume of creation and recording in this era we live in. Should these performance experiences be viewed more as ephemeral events from a very specific place and time, an expanded view of site-specific work? Is it possible that there could ever be electroacoustic “war horse” pieces that continue to be performed centuries later?