Viewing last year’s self-titled DVD from Indianapolis “computer-acoustic trio” Big Robot is an exercise in forbearance. The DVD includes six audiovisual pieces, the last of which is divided into three movements; all of this material works by suggesting and then withholding, cannily but almost ceaselessly, the formal and rhetorical identifications, explicit visual and auditory referents, and narrative connections that, by the end of the DVD, we’re made to crave. 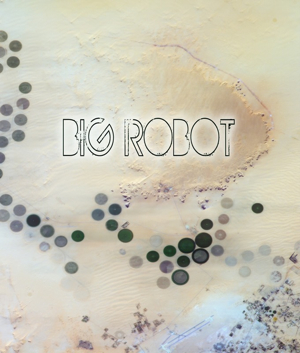 Big Robot
Unmanned Studios
Purchase
Viewing last year’s self-titled DVD from Indianapolis “computer-acoustic trio” Big Robot is an exercise in forbearance. The DVD includes six audiovisual pieces, the last of which is divided into three movements; all of this material works by suggesting and then withholding, cannily but almost ceaselessly, the formal and rhetorical identifications, explicit visual and auditory referents, and narrative connections that, by the end of the DVD, we’re made to crave.

Big Robot comprises Scott Deal, Michael Drews, and Jordan Munson, all of whom are affiliated with IUPUI (Indiana University-Purdue University Indianapolis)—a mouthful of a school whose Arts and Humanities Institute is credited in the DVD’s acknowledgments. Each of these collaborators has a distinct instrumental specialty, but “programming” is chalked to all three; although Munson (winds) receives the nod for “video,” it is indicated that Drews (keyboards/guitar) and Deal (percussion) furnished some assistance in this department as well. Composition and improvisation, planning and spontaneity by the group and by its constituents, intermingle in an unknowable but apparently near-equal proportion—and the degree of aesthetic single-mindedness in evidence on the DVD is impressive: Deal, Drews, and Munson, who have been working with one another since 2009, have cultivated a strong sense of ensemble and shared purpose that knits together every track.

That’s not to say that Big Robot doesn’t occasionally indulge in some rather more straightforward moments, too. Jackwalk, the fourth piece on the DVD, includes some material reminiscent of the opening credits of an unprecedentedly opaque CBS procedural—CSI, Twin Peaks, maybe. But even in that case, the simple decision to bring this material back later on has a profound effect, because it lets us apprehend the intervening stuff as a temporary breakdown rather than a return to the status quo. Noir, meanwhile, has a much firmer narrative framework than the other pieces on the DVD; it’s more an unsparingly edited sequence of slasher flick outtakes than an experimental video piece of the sort Big Robot has trained us to expect. It’s a surprising but genuinely bold move to explore a sound world that many lay listeners find ominous and menacing while showing us a Volvo stranded in the rain at night, a mysterious wooden box with a portentous, impossible photo in it, and a creep with burlap on his face—exactly the kind of images that those of us more accustomed to drones, shrieks, and sub-100Hz bumps in the night have probably stopped associating with the sensorium of experimental music. Big Robot is challenging us: have we really scrubbed those horror-movie accretions from our hearing brains, or can we still be scared by electroacoustic music?

The DVD’s final gesture, however, betokens a less confrontational turn: among the very last images we see in From the Ripples of a Towering Ocean III is what appears (as always, it’s hard to say for sure) to be one of the group’s members. It looks like he’s exposing “the cross points of virtual and physical gesture,” as the group’s blurb has it, by performing tracked motions that correspond to (and are no doubt somehow responsible for) the piece’s audio. The possibility that one of Big Robot’s human operators has popped up to bid us farewell at the DVD’s conclusion is a pleasing one, and not just because it reminds us that these three musicians are more than just three chutes emptying into a single churning vat, as the monolithic unity of the DVD sometimes implies. For Big Robot to show us part of itself is for it to commit the ultimate vulnerability, to subtly break character just in time for the curtain call. It’s the perfect way for the DVD to end, and I encourage you to pick up a copy so you can enjoy this small but generous reveal—and the very un-small, un-generous plane of sound and light that precedes it—for yourself.