The more you listen to Lumen, an extremely expansive two-CD set culled from twenty years of recordings of music by Philadelphia-area composer/pianist Adam Berenson, the less aware you are of whether the music was composed a priori or improvised on the spot. 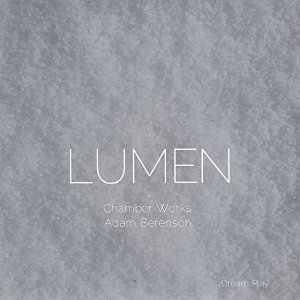 In what seems like a deliberate play on the channel surfing of this day and age, Lumen, an extremely expansive two-CD set culled from twenty years of recordings of music by Philadelphia-area composer/pianist Adam Berenson, constantly changes moods and styles. From track to track, it veers between performances by a jazz combo (where Berenson is joined by Scott Barnum on bass and either Bob Moses or Bill Marconi on percussion), string quartet compositions, solo piano improvisations (which upon occasion wander inside the piano), and sonic experiments involving percussion and electronics. Within this premeditated serendipity, however, a subliminal through-line emerges. The more you listen, the less aware you are of whether the music was composed a priori or improvised on the spot.

In a cover letter from Berenson that accompanied the disc when it was sent to me back in March, Berenson claimed that in his “improvised ensemble work” and his “composed string quartets … the musical thinking is the same, the psyche is the same, and the process of making the music is very similar; all of the pieces are chamber music. … The concept behind the set is that in the modern world everything is everything.”

While concluding each disc with a string quartet composition could imply that his fixed music is somehow a crystallization of his improvised material, Berenson subverts that interpretation by ending the first disc with his String Quartet No. 3 and the second with String Quartet No. 1. To further mix things up, four of the tracks are parts of a work entitled “jnana”—parts 10, 13, and 8 appear on the first disc while part 18 is on the second. Aside from teasing listeners curious about at least fourteen additional parts to this piece that were not included, the listening path that Berenson has chosen for his listeners ultimately guarantees that the journey is not a chronological one. After having taken Berenson’s journey several times, here’s an attempt at a travelogue. But first, take a listen to one of the tracks.

Adam Berenson: “jnana (Part 8)”. Adam Berenson – piano, synthesizer, live electronics, and composition;
Scott Barnum – doublebass, prepared doublebass, and live electronics; Bill Marconi – percussion and live electronics.
Featured on Lumen, ℗ and © 1998-2014 by Adam Berenson / Dream Play Records and streamed with permission
The first disc opens with “Transpersonal,” a percussion duo with Marconi which sounds somewhat incantatory given its various gong twacks. This is immediately followed by the first installment of “jnana” (part ten) which combines what sounds like a mildly prepared piano with an array of electronics that hint at the sonority of the mellotron as well as magnetic tape speed manipulations. Are folks still using reel-to-reels like this? Cool. Some mysterious percussion and an occasional arco bass chime in on occasion to add to the sonic mayhem. “Late 20th century Stomp” is the first of the tracks to directly evoke the sound world of jazz, specifically that of one of its most ubiquitous combos—the piano, bass, and drums trio—in exploratory music that would feel at home on one of the original ESP-Disk’ releases. It’s all over in only 38 seconds, but the trio continues on in the equally adventurous “Emotional Idiot,” which features some skewed walking bass lines and frenetic drumming. However, although “Prose Surrealism” also features a jazz combo, here they begin to stray into very different sonic territory whose source is the other, equally inspirational end of the ‘60s jazz spectrum; the music they’re now playing would not sound out of place subbing for the Bill Evans trio at the Village Vanguard.

Things return to a more decidedly free jazz state on “Very Soon Mankind Will No Longer Be a Useless Passion (Broadway Melody Of 1996).” And all things are possible in the next section of “jnana” (part 13) which revels in an array of electronic experiments. “Rilke,” on the other hand, is a gorgeous, almost Scriabin-esque solo piano fantasia which segues abruptly into “Ricercar (for Sven Nykvist),” an homage to Ingmar Bergman’s cinematograther, returning us to jazz while “…was near the black plague…” is something of a bitonal rag. “A Little Boy Opened a Window” introduces some prepared piano sonorities in combination with percussion; at one point, Berenson ekes out a tune reminiscent of “Mary Had a Little Lamb.” For “…Searching… Everywhere” the trio returns for what is perhaps the most laid back music they have played thus far. “Dithyramb” continues the jazz trajectory, only now the musicians are playing in a way that hints at Cecil Taylor’s early combos.

This is followed with another dose of “jnana” experimentation. (It’s part 8, for those keeping score.) But about a minute and half in, there’s a brief pause and the texture suddenly completely transforms. It’s suddenly all acoustic. An almost hymn-like piano melody is accompanied by arco bass and occasional percussion punctuation. You might think you’re in a new track; you’re not. After only about a minute, more unusual sounds return, some seemingly electronically generated although at this point the ear has been pulled in so many directions that it’s hard to tell! The experimentation of “jnana” continues on “Treaty of Dancing Rabbit Creek,” in which Barnum and Berenson are joined by Eric Hofbauer on guitar and all three share percussion duties; acoustic and electronically modified sonorities seamlessly blur, although now there are also hints of grooves from time to time. Then comes the live performance by the JACK Quartet of a roughly 16-minute single movement composition for string quartet, his String Quartet No. 3, which involves tons of extended techniques—snap pizzicatos, col legno, etc. As a result of all the improvised and electronic music that proceeds it, this notated acoustic chamber music composition often sounds like it’s neither.
“I,” which opens the second disc, begins with a riff on the synthesizer which is quickly joined in duet with acoustic piano, contrasting the abilities of these two very different keyboards—Berenson’s fingers race across the keys of the piano while his synthesizer lines are mostly slower and take advantage of the ability to change the ADSR envelop as well as to bend notes. “Respectable People” brings us back to the jazz trio for what is mostly a straight-ahead performance. “Stars 1” is another piano solo, a quiet chain of block chords, but for “The Adytum,” Berenson’s aphoristic piano lines are enhanced by eerie electronic clusters. On “Tickled to Death,” bass and drums punctuate a captivating series of jagged scalar runs on the piano, and more experimentation ensues on the final installment of “jnana”—part 18. (I really do want to hear the missing parts. Note to self: acquire Berenson’s 2010 CD Jnana.)

“Ingrid Thulin” is a slightly blues-tinged tribute, for trio, to the celebrated Swedish actress who appeared in many Ingmar Bergman films (there’s Bergman again), after which “through this stillness,” which pits piano against bowed cymbals, has a Feldmanesque quality. But perhaps the most introspective track in the entire collection is “Yasujiro Ozu,” which combines oblique piano chords with muted percussion taps that almost sound like footsteps. For its five minutes, time seems completely suspended, which is perhaps appropriate given the track’s namesake, the seminal Japanese director whose often static films are completely immersive. In “Spooky action at a distance,” Berenson wanders back inside the piano, rubbing strings with the flesh of his fingers à la Henry Cowell’s “The Banshee.”

The remainder of the disc is devoted to a 1997 studio recording of Berenson’s first String Quartet, a five-movement composition whose twelve-minute first movement is glacially slow; it is followed by faster music that seems like it’s about to go somewhere, but never does. (This is actually a compliment.) The third movement returns us to the slowness which now feels even more somber, perhaps as a result of being misled about going somewhere else in the previous movement and winding up back here instead. The fourth movement at times has a similar quality to the early chamber music of Arthur Berger, which has been very appropriately described as a kind of diatonic Webern. It turned out not to be a path Berger or anyone else wound up taking, so it’s nice to hear it being explored again. But where Berenson ultimately takes us to, in the quartet’s final movement which is also the final track on the disc, is slow, somber music once more. It’s been quite a ride.