From the time I took up the saxophone as a teenager, I have been fascinated by exploring sound in unusual architectural spaces. When I finish playing a note in the Church of San Bartholomeo in southern Italy, notes are sustained by the sanctuary’s pristine reverb, which exaggerates the intensity of selected harmonics and creates the illusion that the size of the saxophone has grown to fill the space. The room performs as we listen to the decaying resonances.

I find architectural spaces by accident, through recommendations from friends, and by searching for sites with peculiar histories. One of the most enticing discoveries happened when I traveled to the city of Matera, in southern Italy, to vacation after working on a sound installation for the 55th Venice Biennial. Matera has been populated since Paleolithic times and, over the ages, homes, churches, and now spas have been carved into the calcareous rock hillside, known as the Sassi di Matera. This cave village was used by Italian filmmaker Pier Paolo Pasolini as the setting for ancient Jerusalem in his masterpiece The Gospel According to St. Matthew. The primeval looking nocturnal skyline of the Sassi flashes on the screen in Metallica’s music video Spit Out the Bone.

Arriving in Matera to enjoy a couple of days as a tourist, I was introduced to caves with ancient frescoes, and a contemporary art space comprising a network of cave galleries. For me, vacation had to wait as impromptu recording in the caves began. The recording site that I was drawn to experiment in was an ancient church, carved in the side of the Sassi, with interconnected rooms were the saxophone could resonate in multiple chambers simultaneously. I used these recordings to start a collaborative piece with Amnon Wolman, Security Vehicles Only, published by XI Records. Productive as the Sassi recordings were, I left Matera wondering what it would have been like if I’d had a week to explore the caves, place mics in multiple chambers, and compose music to highlight the resonances of these spaces.

By contrast, I have walked away from recording in architectural settings, feeling over-prepared and underwhelmed by the building’s resonances. A pilgrimage to the Necromanteion of Ephyra, in Greece, was one such experience. Accompanied by Greek professor and audio engineer Nassos Vynios, I traveled to the Necromanteion hoping to record an acoustical marvel. The original temple, established in 1400 B.C., was a structure used by a Chythonic cult which sought to communicate with their ancestors using what we vaguely understood to be a completely unique acoustical phenomena. In modern times, visitors report hearing disembodied voices on site. Without much more to go on, we obtained the permissions to record at Necromanteion and eventually drove four hours from Athens to Ephyra. 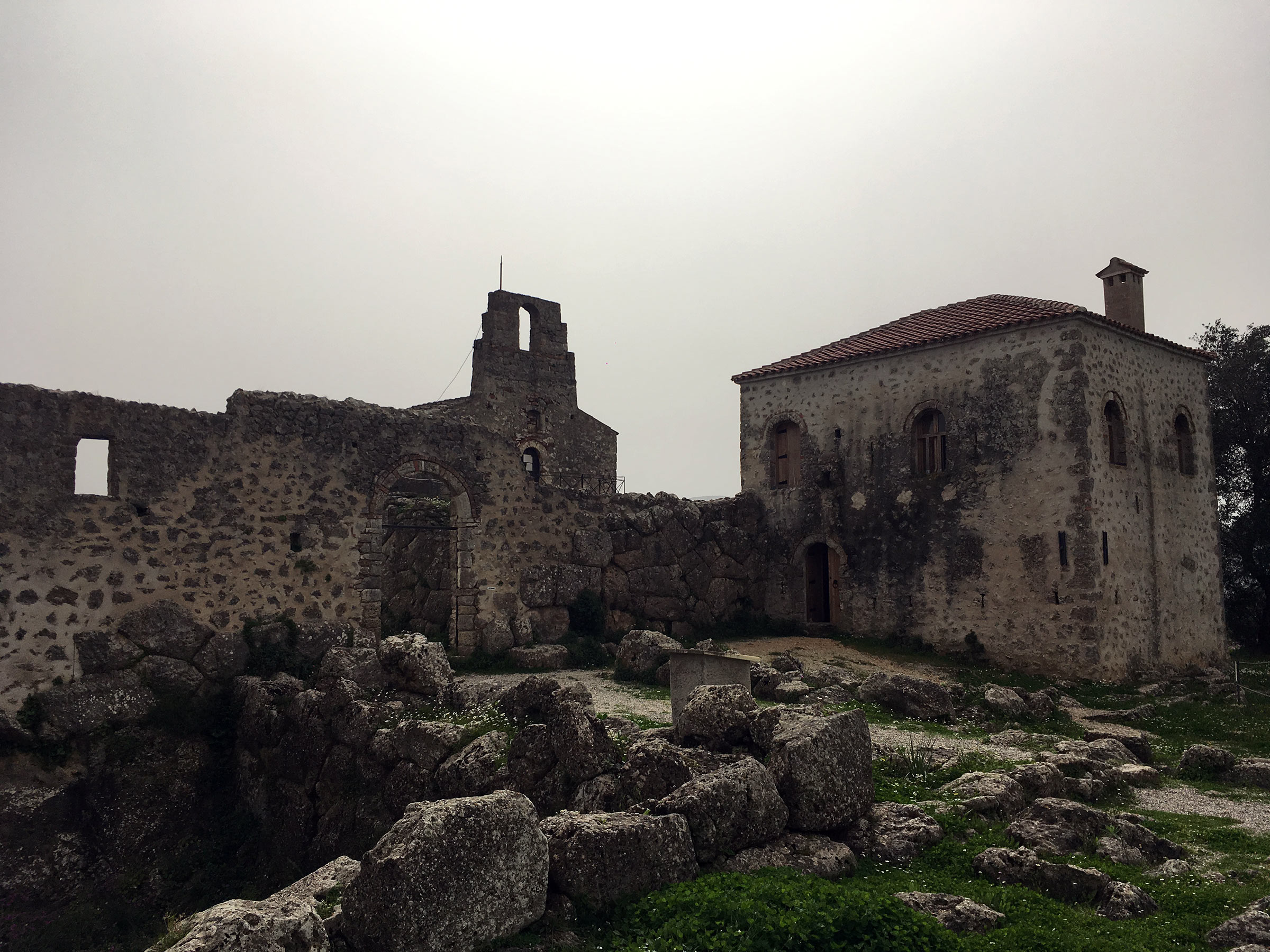 We arrived armed with my saxophone, a 360-degree Ambisonic microphone, and battery-powered Bluetooth speaker to play sine wave sweeps in the space so that we could record their impulse response, or “ring.” Later we would turn these impulse responses into computer-generated reverb simulation. Upon arrival, Spiros Raptis, the custodian filled in more details.

The site is perched on a hill with a panoramic view of wetlands where the three rivers canonically associated with Hades converge, the Acheron (“River of woe”), Pyriphlegethon (“Flaming with fire”), and Cocytus (“River of wailing”). In ancient times, the hill was an island that appeared to rise above the surrounding mist. Originally, the site was dedicated to Gaia (Earth)—a Chthonic, or subterranean, Goddess that required nocturnal ritual sacrifice. Visitors wishing to speak to the dead spent days on a preparatory diet of pork, rye bread, and oysters and consumed narcotic compounds prior to entering the subterranean chamber, later called the Temple of Hades and Persephone. Worshipers came from far and wide, and a complex comprising a cluster of hostels, shopping bazaars, and brothels eventual grew to accommodate them.

In 1958, the Necromanteion was rediscovered by archaeologist Sotirios Dakaris during his search to find a site described in Homer’s Odyssey and Herodotus’s Histories. Dakaris proposed that the subterranean chamber was the setting for Odysseus’s visits to consult the blind seer, Tiresias, who advised him on how to return to his home in Ithaca. It is also speculated that Homer himself visited the Necromanteion. 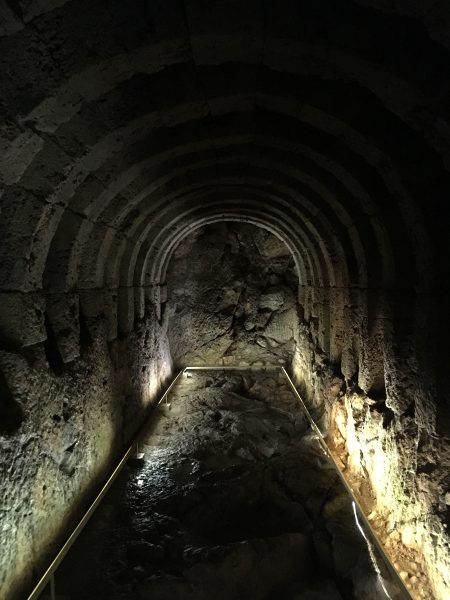 The original subterranean chamber was renovated around 400 B.C. and is now a 50 x 13-foot stone room, flanked by 15 arches carved from porous stone. A recent theory suggests that the renovated chamber might actually have functioned as a cistern or as underground storage for a farmhouse in the Hellenistic period. Panagiotis Karabatsos and Vasilis Zafranas from the Acoustics Laboratory of the Department of Architecture of the Aristotle University of Thessaloniki don’t agree. They studied the space for twelve years and concluded that the Necromanteion was constructed to create an intense psychoacoustic phenomenon, analogous to the anechoic chambers found in modern acoustical laboratories such as Nokia Bell Labs or MIT Lincoln Laboratories in the United States.

Before entry, Spiros warned us that it is difficult to spend more than a few minutes in the chamber without feeling like one is losing their mind. On that note, we unpacked our gear and descended two stories of scaffolding to the chamber. Within minutes, both Nassos and I felt increasingly disoriented. The utter silence, darkness, and sense of being underground induced a mix of nausea, claustrophobia, and maybe even vertigo. I did not hear the reported voices talking to me, but Nassos and I were both eager to escape back to the sunlight, fresh air, and ambient noise above ground as fast as we could.

Post-nausea and doubtful how this experiment would play out, we went back down into the underground chamber. I picked up my saxophone and played, thinking of the pilgrims who visited the site over the years and—to my surprise—I found I could play for thirty minutes without pause. Neither Nassos, Spiros, or myself experience any of the symptoms we suffered at first. Next, we recorded computer-generated sine glissandi, from 20 to 22k hertz. The sine sweeps produced dramatic panning effects as the Necromanteion played ventriloquist, mysteriously displacing the source of the sound.

In much the same way I surveyed Matanzas in the previous blog post, Nassos and I surveyed ancient Greek architectural sites looking for unique acoustical phenomena. We made a pilgrimage to the Tomb of Agamemnon, King of Mycenae and leader of the Greeks in the Trojan War. In his 42-foot high, cone-shaped tomb, with curved walls resembling half a football, we experienced incredible slap-back delays. We visited the Temple of Apollo in Delphi and saw the Hymn to Apollo, one of the oldest musical scores in Western civilization. We explored the Epidarus Theater, the canonical masterwork of ancient acoustical design often depicted in textbooks on acoustics.

For both of us, the Necromanteion, with its awe-inspiring folkloric history and strange acoustics, was perhaps the most impactful site we experienced. We caught a glimpse of the illusion, created out of terrifying silence, to invoke the world of the dead. It was a space where reverberations and other sonic traces of the world of the living disappear and a world void of light and sound extended infinitely.

Other notable experiments with sound and architecture include recording in the Wright Brother’s Wind Tunnel operated by the MIT Department of Aeronautics and Astronautics and Casa da Música, in Portugal, designed by Dutch architect Rem Koolhaas. In each case, my approach was shaped by both the sound of the space, researching the history of the site, and listening to the local’s perception of the importance of the architecture and social usage of the space.

Graphic Score for 1000 mobile devices in Casa da Música, Portugal. Each square represents a block of 33 mobile devices playing samples of Leonard recorded in the acoustical studies chamber at The Institute for Systems and Computer Engineering, Technology and Science (INESC TEC), Porto, Portugal.