Six Skinny Strings: The Reason for the Season
NewMusicBox
Written By

Six Skinny Strings: The Reason for the Season

Two weeks into the virtually undodgeable 24/7 Winter Wonderland sound collage that is this time of year, I’ve been looking for something without sleigh bells, warm brass, and mixed chorus. My search for sanctuary from the rising Yuletide led me to Skinny’s Ballroom in the heart of downtown Austin for a bit of improv holiday cheer.

Two weeks into the virtually undodgeable 24/7 Winter Wonderland sound collage that is this time of year, I’ve been looking for something without sleigh bells, warm brass, and mixed chorus. Though we’ve finally cooled to a seasonally congruent temperature here, it’s still odd to hear all the Christmas tunes when only a few weeks back people were still wearing shorts and sandals in the beer gardens (I’m looking at YOU, me). I don’t mean to come off all Scroogey. For the most part I enjoy all the seasonal goodness, but my search for sanctuary from the rising Yuletide led me to Skinny’s Ballroom in the heart of downtown Austin for a bit of improv holiday cheer. After paying a sliding scale cover ($5-$10, pay what you can), I found myself in a physically typical and fairly swanky shotgun shack of a downtown bar (though one that had been thoroughly renovated) with a bar to port, a half-dozen church pews to starboard, and the requisite booths, stools, and dudes. A cursory glance at a stage decorated with drums, monitors, guitars, and all the typical gear—including a guy checking levels on a red Gibson 335—seemed to indicate a place that was prepped for any of a number of Austin’s indie bands.

The show was curated under the auspices of Ten Pounds To The Sound by Chris Cogburn (whose No Idea Festival will be covered here in the very near future) and featured three guitarists—Jonathan Horne (Austin), Lucas Gorham (Houston), and Mexico City guitarist and improviser Fernando Vigueras in his first ever U.S. tour. Kicking off the festivities was Horne, who started his set in a sort of gonzo, quasi-Hendrix fashion, steeped in feedback and blurred scale runs, head lolling around like a rag doll. Standing mute before a microphone, Horne smeared blues licks mixed with arpeggios in a flurry of messy, expressionist fretboard gymnastics. The second tune featured bowed sextuple stops and heavily textural elements—think of the first minute of Penderecki’s Threnody… without the following minutes, for about six minutes. In a screeching left turn, Horne followed up with an instrumental cover of the Carter Family’s version of “Wildwood Flower,” the melody peeking out through the madness like a country mouse lost in the big city. A brief encore echoing the gestural elements of the first piece wrapped up Horne’s set. 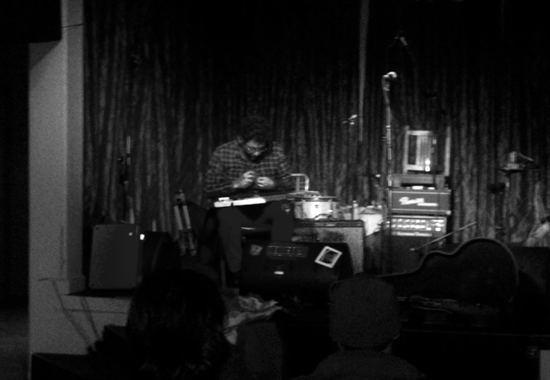 Lucas Gorham
Lucas Gorham began playing almost imperceptibly with a lap steel signal hissing like the start of a record. Volume and wah-wah swells developed so quietly you could actually hear him pick the string before the swell, and the audience (in a bar which required no such reverence) was drawn in and church quiet. These were actual Cageian moments in which the ambient sounds of the room (sounds at the bar, front door opening, someone walking to the back) mixed with the music in a truly compelling counterpoint. Granted, you might get a similar mixture of sounds at your local coffeeshop’s singer/songwriter night, but the impact here was different, perhaps because of the improvisatory and non-lyric-oriented nature of the music. As the piece developed, reverb explosions[1] morphed into lonesome tritones in a captured sound-on-sound texture. A layered figure not unlike cello tremolo was created by beating the bridge of the guitar, and as the sound-on-sound looped round and round, Gorham dumped the lappy and moved to a Strat to begin playing bass notes over the repeating texture. These notes had a multidimensional quality that I can only describe as the opposite of overtones—“undertones” maybe? Swelling power chords[2] oozing distortion spoke to their metal roots while shrugging off any sense of hipster appropriation as sixteenth note strumming lent a percussive rhythmic element to the pulsing mix. A shift to a hoedown rhythm marked a move back to the pedal steel, which Gorham used to play somewhat more traditional licks over the Strat groove-soup that still boiled around him. It was striking that despite the use of these instruments and fairly idiomatic techniques, the music never sounded like borrowed stylistic material. Gorham continued by picking behind the bridge and manipulating a delay pedal, which when done in real time (typically these pedals are “set it and forget it”) created a magical toy piano effect mixed with something of a microtonal glissando. This was followed by a return to the grumble roar of distortion which sort of tore the whole thing a new one. When the sound had faded and Gorham looked up, the audience responded with long and loud applause. There was even a guy in the back who did that “whipping your cowboy hat around in a circle” thing[3], which I can safely say I’ve never seen except in the movies. 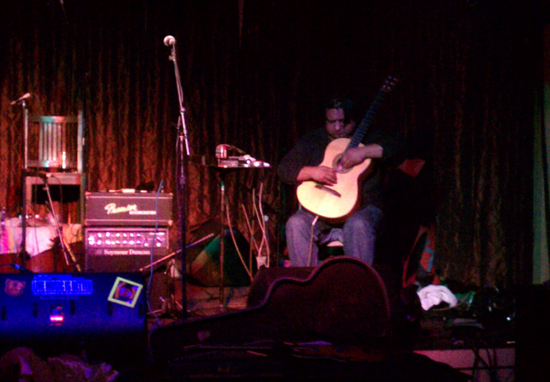 Fernando Vigueras
Fernando Vigueras’s background includes conventional guitar playing and training, but his performance at Skinny’s was anything but conventional. He came on stage with a nylon string acoustic guitar and a small portable fan (the tiny handheld kind you might see around the pool) and sat down on a chair surrounded by foot pedals and other electronics. He began by detuning the bass strings while using the spinning fan blades to create a tremolo so severe that the loosened strings began to slam against the fretboard repeatedly like Bartók pizz trapped in a MAX patch. This quasi-percussive sound gave the impression of a drum roll as opposed to a pitch event, and as the sound evened out, Vigueras captured it with a loop pedal. Above this texture, he gave the same fan treatment to the treble strings which came off like a giant harpsichord or press-rolled hammered dulcimer in a horror film. He then began stick-rubbing, pick-sliding, and finger-tapping the strings against the fretboard, the last of which looked a bit 1980s but sounded really quite 2080s. Against the slow decay of this large texture and in a wash of reverb, he began plucking the strings and adjusting the tuning pegs, providing the first substantial (and melodic—a term I use loosely here) pitch material of the piece. Harmonies began to form from the extended single lines, which in turn formed beds for further melodic material. During the bulk of the performance Vigueras held the guitar in a more or less conventional fashion, but as the piece progressed he pulled the guitar up such that the neck was nearly parallel with his own, with the lower bout (the bottom of the guitar) in his lap. As both arms wrapped around the body, one hand made its way up the fretboard and moved above the nut, plucking the parts of the strings which are only a few inches long between nut and tuning pegs. The other hand moved down to the bridge and began touching the strings, creating sounds through the pedals like the striking of super-tight drum heads or (as it says in my notes) “popcorn in Satan’s microwave.” Finally, Vigueras pulled out a bow, carefully pulling across the highest strings[4] which created impossible overtones that, while quite beautiful, must have completely freaked out any dogs within several blocks.

A few weeks ago, I said that my experience at the Green House show was one that was “uniquely Austin,” and while I stand by that statement, I have to say that my idea of new music in this town (particularly in terms of venue) has been somewhat broadened. This show was really spectacular, pulled no punches, and was only a block from the Austin Convention Center. I’ll never tire of shows in funky little out-of-the-way venues, but to see a full-fledged improv show in an otherwise conventional bar in the middle of the week was heartening. Maybe it’s the season that’s raised my spirit, or maybe it’s Vigueras’s impossible overtones still ringing around in my head, but it’s good to know that I can duck into a downtown bar and hear looped and layered improv guitar alongside the backbeats and blues licks that have echoed through the air in Austin for so many years.

1.     Anyone who has ever moved a powered-on guitar amp with a spring reverb knows this sound (at about 0:08.)

2.     It’s just a root and a fifth, but with distortion they are, well…quite powerful. Just ask the Scorpions. Do not ask Twee.