There are few opportunities these days to hear live performances of the deeply felt, sonorously shaped music of the New England composer Walter Piston. His colleague Aaron Copland called Piston “one of the most expert craftsmen American music can boast,” which has become a standard assessment. It has also boxed him in. While intended as a compliment, this appraisal suggests Piston to be something of a technocrat, a musician of the mind rather than the heart. This impression is far from the case.

[Ed. Note: The following essay, in a slightly modified form, originally appeared in the program guide for a March 29, 2011, concert devoted to the music of Walter Piston by the American Symphony Orchestra under the direction of Leon Botstein at Carnegie Hall.—FJO] 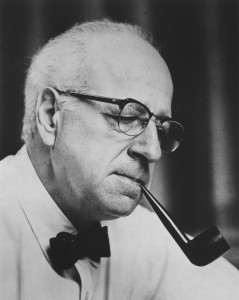 There are few opportunities these days to hear live performances of the deeply felt, sonorously shaped music of the New England composer Walter Piston. His colleague and contemporary Aaron Copland called Piston “one of the most expert craftsmen American music can boast,” which has become a standard assessment. It has also boxed him in. While intended as a compliment, this appraisal suggests Piston to be something of a technocrat, a musician of the mind rather than the heart. This impression is far from the case. While Piston’s technical expertise is irrefutable, as Copland and others affirmed repeatedly over the years, he also had a soul, and he attained a depth of beauty that at times was breathtaking. Perhaps today’s re-engagement with tonality makes us ready to give this important mid-20th-century talent another chance.

Piston’s roots reflected a classic post-immigrant saga. Born in Rockland, Maine, he was the grandson of a seaman who made his way to Maine from Genoa in the mid-19th century. The family moved to Boston in 1905. They were “far from wealthy,” as Piston later acknowledged. He went to Mechanical Arts High School, where he trained as a draftsman, and he then attended the Massachusetts Normal Art School, where tuition was free. There he met his future wife, the artist Kathryn Nason (1892–1976). In 1919, Piston took Archibald Davison’s counterpoint class at Harvard, and Davison recognized his gifts immediately, arranging for him to enter as a fulltime student the following year, when Piston was 26. Upon graduating from Harvard, Piston won a John Knowles Paine Traveling Fellowship and joined a pilgrimage of American composers to Paris and the studio of Nadia Boulanger. In 1926, Piston returned to Harvard as a member of the faculty, remaining until his retirement in 1960. Over the course of nearly four decades, he taught a distinguished series of future leaders among American composers, including Arthur Berger, Leonard Bernstein, Elliott Carter, Irving Fine, John Harbison, Daniel Pinkham, Frederic Rzewski, and Harold Shapero.

With his longtime Ivy League association, Piston can seem like a composer of privilege. But at base he was a product of the American Dream—of upward social mobility through education and hard work. As his career developed, Piston identified with a cluster of intersecting composer networks. During the 1920s, his music occasionally appeared alongside that of Copland, Roger Sessions, and other young modernists in New York City. An equally crucial network emanated from Boston—not just from Harvard but also from a longtime association with the Boston Symphony Orchestra. During Serge Koussevitzky’s directorship, Piston had a substantial series of premieres with the BSO. In an interview with the composer Peter Westergaard, Piston recalled vividly the impact of the Russian conductor, who joined the BSO in 1924:

When I returned from France I felt pretty gloomy about the situation of the composer in America. I knew conductors were not interested in what we composers were doing, so I was writing only chamber music…. Koussevitzky asked to see me. He asked, ‘Why you no write for orchestra?’ I said, ‘Because nobody would play it.’ And he said ‘Write, and I will play.’ So I wrote and he played.

The composer Mark DeVoto has rued Piston’s later fate with the BSO, which deteriorated after the directorship of Charles Munch (1949–62): “When Erich Leinsdorf and then William Steinberg followed Munch, Piston was essentially forgotten by the BSO, and his music was in eclipse nationally by the time of his death in 1976.” In fact, a recent search for “Walter Piston” in the Boston Globe online turned up far more hits for basketball games between the Detroit Pistons and Boston Celtics than for the city’s native-son composer.

Another influential strain in Piston’s career had to do with his work as “a progressive new theory teacher,” as his former student Elliott Carter put it. Ultimately Piston published four widely used textbooks: Principles of Harmonic Analysis (Boston, 1933), Harmony (New York, 1941), Counterpoint (New York, 1947), and Orchestration (New York, 1955). Harmony, revised and expanded by DeVoto, reached its 5th edition in 1987; in the 1950s it was translated into Chinese, Japanese, and Korean.

Like Roger Sessions, Piston was a determined internationalist, avoiding the “Americana” vogue that energized so many composers during the 1930s and 1940s. Piston emphatically identified as a trans-Atlantic musician, which he made clear in an interview with the British composer and scholar Wilfrid Mellers: “I would say that American backgrounds are the same as yours. I’m sure you would include in your background Italian music of the Renaissance, French music, German music; you should give us the right to include those in our backgrounds, because they are our artistic antecedents, and not only that, but our blood. I myself am one-fourth Italian.” Thus Piston strove to transcend national boundaries, aiming to write music that would take its place in a Euro-American cultural matrix.

Walter Piston’s 1937 Concertino for Piano and Chamber Orchestra, which was commissioned by the Columbia Broadcasting System as part of an initiative to inspire new works for radio, mimics a traditional three-movement concerto, and its clarity and wrong-note tonality reveal Piston’s early affinity with the neoclassical phase of Stravinsky. His first Violin Concerto was composed in 1939 and had its premiere in Carnegie Hall on March 18, 1940, by Boston-based violin virtuoso Ruth Posselt and the National Symphony Orchestra. Nearly an exact contemporary of Barber’s Violin Concerto, Piston’s work has been eclipsed by that more famous work. Piston’s Concerto uses a traditional three-movement form: Allegro energico, Andantino molto tranquillo, and Allegro con spirito. Piston fully understood the capacities of each orchestral instrument, and he made them sound their best—a bit like a fashion designer who brings out the personality and physical attributes of the person for whom a piece of clothing is intended. “I must say I’ve always composed music from the point of view of the performers,” Piston once declared. “I believe in the contribution of the player to the music as written. I am very old-fashioned that way.” Benjamin Britten recognized this skill, telling Copland at the premiere of the Violin Concerto that “there was no composer in England of Piston’s age who could turn out anything so expert.” 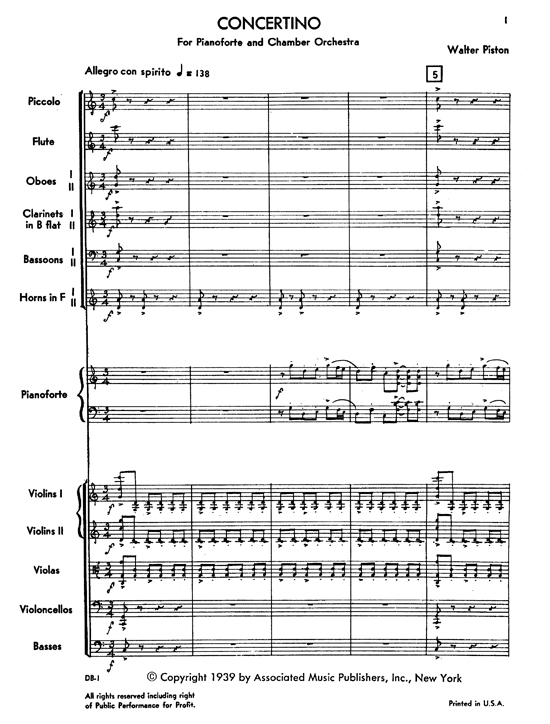 The Symphony No. 2 (1943) has an unabashedly beautiful middle movement (Adagio) which is shaped as a resonant and meditative chorale, albeit with bluesy flourishes; its emotional warmth shows Piston to have had an aesthetic kinship with Samuel Barber. The symphony won a New York Critics Circle Award, and it enjoyed considerable success during WWII, with subsequent performances by the BSO, the NBC Symphony, the Cleveland Orchestra, and the Philharmonic-Symphony Orchestra, among others. Writing in The New York Times after the Philharmonic-Symphony’s performance of the work in 1945, the critic Noel Straus put his finger on the central issue in Piston’s reception:

It has been generally conceded that no contemporary composer of this country surpasses, if any [even] equal, Mr. Piston in sheer technical skill. But all too often his output has been considered dry and academic. In this symphony he is again the master craftsman, while at the same time he managed to invest the content with a wealth of mood and meaning that defy any such censure.

Piston’s Symphony No. 4 was commissioned by the University of Minnesota for its centennial celebration and had its premiere on March 30, 1951, by the Minneapolis Symphony Orchestra (now the Minnesota Orchestra), conducted by Antal Dorati. The work is in four movements, and Piston described it as being “melodic and expressive and perhaps nearer than my other works to the solution of the problem of balance between expression and formal design.” In other words, Piston understood his yin and yang, even though his prose descriptions tended towards the formalistic. As with Symphony No. 2 and the Violin Concerto, this symphony plugs into a Central European orchestral lineage, perhaps connecting most with Brahms. But the second movement (Ballando) doffs its hat to country fiddling, appearing as a response to works like Copland’s Rodeo. Perhaps this was Piston’s way of offering regional color in a commission from the Middle West. 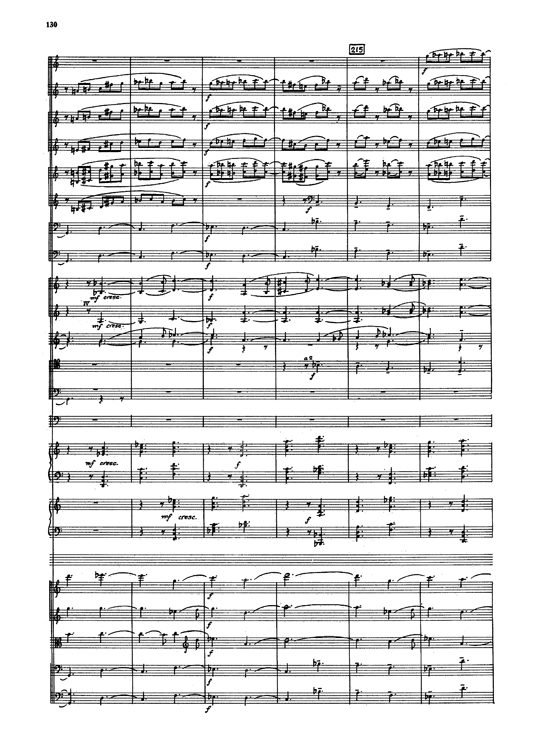 Ultimately, Piston wrote eight symphonies plus another 30-some works of various types for orchestra. He was almost exclusively a composer of instrumental fare.

From the perspective of the early 21st century, the music of Walter Piston sounds mighty appealing. In the decades since his death, his reputation not only struggled because of his “conservative modernist style,” as his biographer Howard Pollack aptly defined it, but also because he was something of an “introvert,” as Pollack also observed. Piston expressed himself eloquently in music, but in prose he was largely pragmatic, offering few power-adjectives for those who might want to market his music.

Yet others found ways to articulate the cultural status of Piston’s compositions. Writing in 1946, Elliott Carter zeroed in on the main issues that held Piston back, yet he predicted a rosy future:

Through the years when the ‘avant-garde’ moderns were busy exploring fantastic new sounds and sequences, …through the early thirties when a new wave of nationalism and populism startled many into thinking that the concert hall with its museum atmosphere was finished as a place for living new music, down to the present more conservative situation, Piston went his own way. He stood firmly on his own chosen ground, building up a style that is a synthesis of most of the important characteristics of contemporary music and assimilating into his own manner the various changes as they came along. . . . His works have a uniform excellence that seems destined to give them an important position in the musical repertory.

Carol J. Oja is the William Powell Mason Professor of Music at Harvard University. Among her many books, Making Music Modern: New York in the 1920s won the Lowens Book Award from the Society for American Music and an ASCAP-Deems Taylor Award.