Pittsburgh has more going on in new music, and the arts in general, than you would expect for its size (around 300,000 people in the city, and 2.4 million in the metro area). This is due in part to a high density of universities with good music programs, but new music events aren’t confined to the academic year. When summer comes and many cities offer little in the way of classical music besides orchestral pops, Pittsburgh has more modern sounds than you can shake a 4th of July sparkler at. 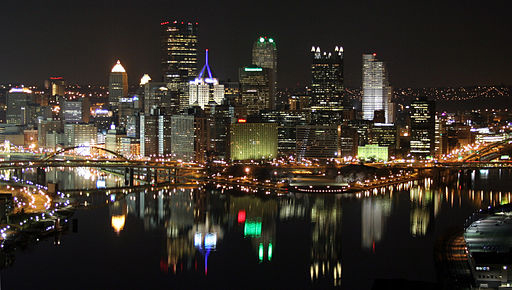 “Reflections of Pittsburgh” Photo by Michael Righi via Wikimedia Commons

If you fly into Pittsburgh International Airport for the purpose of visiting the city itself, chances are you’ll pass through the Fort Pitt Tunnel, the subterranean stretch that bores through Mount Washington and connects Pittsburgh’s western residential neighborhoods with its downtown business and cultural district. The contrast between one end of the tunnel and the other is stark; after traversing several miles of typical suburban freeway lined with rolling hills and trees, you burst out into a majestic tangle of bridges and skyscrapers at the confluence of three rivers. The impact is heightened if you emerge from the tunnel at night, when the illuminated cityscape is complemented by color-coded lights scaling the tracks of Mount Washington’s two funicular railroads, known in local parlance as “inclines”: red for the Duquesne, blue for the Monongahela. Pittsburgh’s surprisingly rich visual welcome is an apt metaphor for my experience of the new music scene here: unexpected, somewhat hidden until you’re right on top of it, and reflective of the region’s distinctive topography and history.

I came to Pittsburgh in 2012, when my husband, a physician, began a fellowship at the University of Pittsburgh Medical Center. We moved here from Boston, where he had done his residency and where I was happily ensconced as director of music at an Episcopal church and co-producer of the concert series it hosted. I found opportunities to perform, have my music played, and of course, attend many concerts of music old and new. I was sad to leave, and uncertain of what I’d find once we moved. I knew of a couple contemporary music ensembles in town, but I just couldn’t envision the Steel City as a place with a thriving new music community, nor did I expect the classical music scene as a whole to match what I was leaving. I assumed I’d need to travel frequently in order to remain active as a composer, and rely heavily on the internet as my source for hearing new music.

Three years later, I am happy to report that I couldn’t have been more wrong. Pittsburgh has more going on in new music, and the arts in general, than you would expect for its size (around 300,000 people in the city, and 2.4 million in the metro area). This is due in part to a high density of universities with good music programs located along a four-mile stretch of Forbes Avenue, including Carnegie Mellon and University of Pittsburgh–both with strong composition programs–and Duquesne University, which turns out great performers. New music events aren’t confined to the academic year, though; when summer comes and many cities offer little in the way of classical music besides orchestral pops, Pittsburgh has more modern sounds than you can shake a 4th of July sparkler at.

It was fortuitous, then, that I moved to town on July 1, just in time for the Pittsburgh New Music Ensemble’s season, four consecutive summer weekends in the small black-box space at City Theatre on the South Side. I knew of the ensemble through their long-running Harvey Gaul composition competition, but I wasn’t aware of their inventive approach to presenting new music. Their concerts are so much more than a dutiful succession of chamber works for varying subsets of their Pierrot-plus-percussion instrumentation. They use imaginative staging, lighting, and thematic programming to create a seamless aesthetic experience–what artistic director Kevin Noe calls a “theatre of music.” The results are revelatory for those of us already in the new music fold, while creating a point of entry for listeners less familiar with our musical subspecialty. My favorite moment of the 2012 season was on a program titled “To the Earth,” when Quartet for the End of Time was followed without pause by 4’33”. Experiencing Cage’s meditation on silence immediately after the ecstatic journey of the Messiaen made both works all the more profound. The highlight of the 2014 season was “Drunken Moon,” a staged reimagining of Pierrot lunaire, where Schoenberg’s knotty cycle narrates a dark romance. Two singers divided up the vocal line (in English translation), navigating a shifting balance of power as their gender roles transformed, and a piece that too often seems like contemporary music’s peculiar prized heirloom became an engaging dramatic event. (Disclosure: I became the newest member of the ensemble’s board of directors in October 2014.) 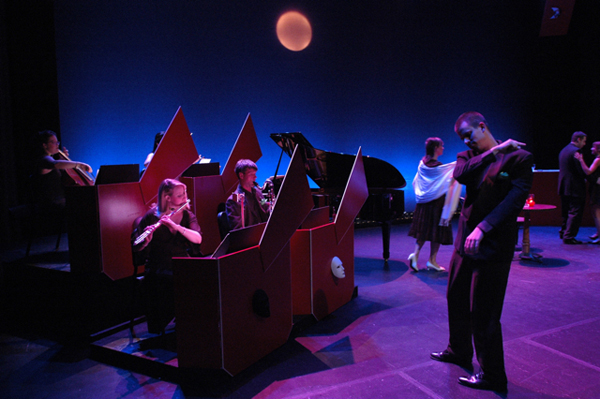 2014 also saw the launch of the Pittsburgh Festival of New Music, produced by Alia Musica, an organization that helps shape Pittsburgh’s new music landscape year-round. Led by Artistic Director Federico Garcia-De Castro, this multifaceted group was founded by seven local composers as a vehicle for promoting new works, both homegrown and imported. In addition to performances by its eleven-member chamber ensemble, Alia Musica produces events featuring new music luminaries from around the country and beyond, and according to Mr. Garcia-De Castro, they plan to make the Festival of New Music a biennial occurrence. The 2014 festival opened on the morning of May 22, as New York-based collective Varispeed brought their version of Perfect Lives, Robert Ashley’s television opera, to the streets of Pittsburgh, performing at seven locations over a span of twelve hours. On May 24, an afternoon-long event called Soundpike gathered an impressive slate of local chamber ensembles, and the ticket price declined the longer you stayed–a far more rewarding experience than driving the Pennsylvania Turnpike. Later that evening, while the Pittsburgh Pirates were busy beating the Washington Nationals at PNC Park, Frederic Rzewski gave a recital of his piano music half a mile away at the New Hazlett Theater, and was received as enthusiastically as Andrew McCutchen at bat.

Now, anyone who knows me knows that working in a baseball reference is a Herculean task for me (when Facebook asked me for my favorite sports team and wouldn’t take the Pittsburgh Symphony as my answer, I was miffed!), but this nerd does her homework. I wanted to find out if my newcomer’s impression of Pittsburgh’s new music scene jibed with that of folks who’ve been here longer, so I asked the members of one of Pittsburgh’s up-and-coming chamber groups for their thoughts: the Trillium Ensemble, made up of pianist Katie Palumbo, a native Pittsburgher; clarinetist Rachael Stutzman, a graduate of Carnegie Mellon; and flutist Elise DePasquale, a transplant to the area. Pittsburgh has experienced “a new music growth spurt that we’ve noticed in the past fifteen years,” says Ms. Palumbo, with “young composers who are writing interesting music for young ensembles,” and “artists who are hard working, determined, and entrepreneurial.” Though it’s no longer a mill town, evidence of Pittsburgh’s blue-collar roots remain. The Trillium Ensemble members describe their audiences as “curious, unpretentious, and not just other musicians.” “Composers bring elements of Pittsburgh pride into their music, and even transplants feel a strong connection to the city,” says Ms. DePasquale. 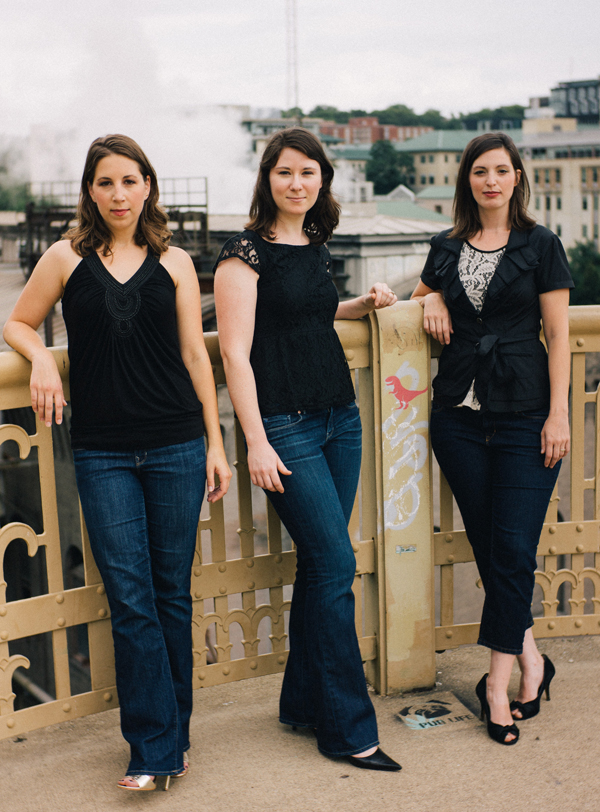 Some of the factors contributing to artistic growth relate to the area’s long history as a center of industry–for example, the continued existence of philanthropic funding, courtesy of names like Carnegie and Heinz. The economic challenges of recent years didn’t hit this area quite as hard as others, and the local economy had already rebuilt and diversified after the decline of the steel industry in the 1980s. The air pollution that used to keep the streetlamps on all day is long gone, and Pittsburgh is now known for education, healthcare, and high tech. Google has an office in what used to be the Nabisco factory.

Other former industrial spaces have been put to good use, too. “Alternative performance and art spaces have been reclaimed from closed-down factories and mills,” Ms. Stutzman observes. The Westinghouse Air Brake factory building in the Strip District is now owned by the Pittsburgh Opera, and has enough room for offices, practice studios, a performance space for chamber opera and dance, and a rehearsal space large enough to hold the sets used in its productions downtown. A North Shore warehouse built in 1911 was reborn in 1994 as the Andy Warhol Museum, dedicated to preserving the legacy of Pittsburgh’s most famous native-born visual artist.

The Warhol Museum serves as a resource for new music as well: the Jack Quartet played to a capacity crowd in its theater in March 2014, and in February of this year, it was one of the venues for the Beyond Microtonal Music Festival, co-directed by composer and University of Pittsburgh faculty member Mathew Rosenblum. Rosenblum is an ardent proponent of microtonal music, but the festival’s definition of the concept was generous; one evening featured Mantra Percussion playing Michael Gordon’s Timber in the Warhol’s entrance space. I think the image of that performance, for amplified wooden 2x4s and light installation, might be the perfect distillation of new music in Pittsburgh: it brought together newcomers and long-term residents, it combined raw materials and the latest technology, and what it produced was both durable and beautiful. 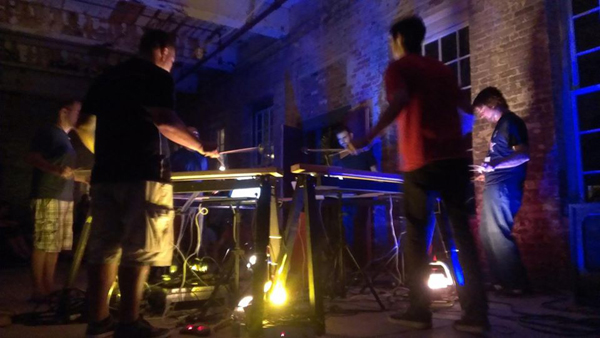 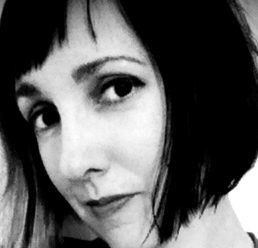 Linda Kernohan, a.k.a. Miss Music Nerd, is a composer, pianist, educator and writer. She teaches music appreciation to unsuspecting college students and private piano lessons to adorable K-12 kids. She is a contributor to Burgh Vivant, Pittsburgh’s cultural talk magazine, and was the classical blogger for the Grammy Awards for five years. She has had her music performed across the U.S.A. and Europe, and has performed as a pianist and organist in a wide variety of venues, from a West Hollywood nightclub to the Basilica of St. Peter in the Vatican.