Ainadamar is Opera Parallèle’s first production since changing its name from Ensemble Parallèle. This small company, founded in 1993 by Nicole Paiement, has turned their focus to contemporary opera with several successful productions over the past few seasons. 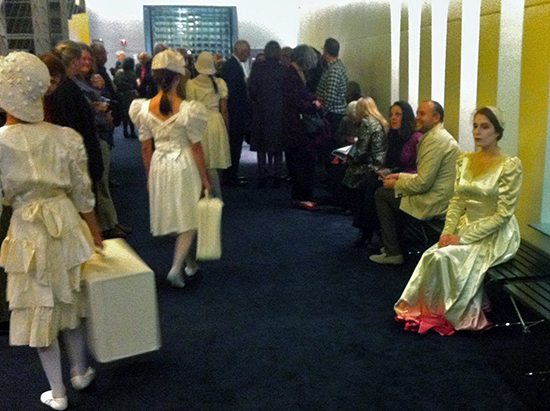 Moving silently throughout the lobby and the theater prior to the start of Opera Parallèle’s recent performances were girls dressed entirely in white, carrying valises, and young women, also in white though their dress hems were soaked in red. These ghostly apparitions moved up and down the aisles and sat quietly among audience members, not interacting but making their presence felt. By the start of the show, all of Las Niñas had made their way onto the stage of the Lam Research Theater at San Francisco’s Yerba Buena Center for the Arts for the opening scene of Osvaldo Golijov’s Ainadamar, which received its first San Francisco production earlier this month.

Golijov’s opera, with a libretto by David Henry Hwang (which was translated into Spanish by Golijov), dramatizes the life of Spanish actress Margarita Xirgu (1888–1969), muse to writer Federico Garcia Lorca (1898–1936; murdered by Fascist forces at the start of the Spanish Civil War). In real life, Xirgu created the role of Mariana Pineda in Lorca’s play of the same name; Pineda was herself an Andalucian historical figure who also was executed for her unyielding commitment to liberal causes. The 90-minute opera shows Xirgu in the moments at the end of her life, preparing to go onstage in a production of Mariana Pineda, remembering her (non-romantic) relationship with Lorca in flashbacks and visualizing the circumstances of his execution. The opera concludes with Xirgu’s own passing and transfiguration. 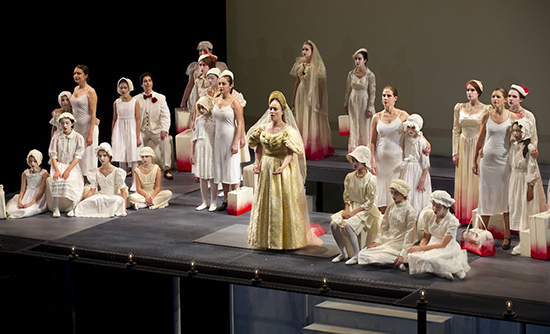 Xirgu, sung by soprano Marnie Breckenridge, and Lorca, a trouser role performed by Lisa Chavez, were joined by Xirgu’s student/protégée Nuria (Maya Kherani) and a chorus of treble voices, sung in these performances by a 13-voice women’s choir and the 15 young members of the San Francisco Girls Chorus dressed in white. Opera Parallèle’s production also featured five women flamenco dancers led by La Tania, who are seen during the opening chorus having their children torn from their arms by male soldiers, a reference to the tens of thousands of “lost children” who were stolen from Republican families by Nationalists for re-education. 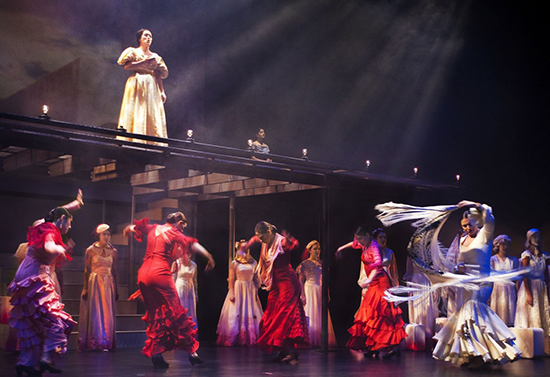 Flamenco dancer La Tania (in white) and four members of her troupe, with Breckenridge, above
hoto by Steve Dibartolomeo

By casting a chorus of young girls alongside the women, and also adding a corps of female dancers who at times appeared as mother figures, Opera Parallèle’s production, directed by Brian Staufenbiel, highlighted the impact of the war on women as well as intergenerational female relationships. While the score calls for a female choir (divided into three groups) to sing Las Niñas’ part, it does not specify children. This choice was a significant and thought-provoking shift from the 2005 production in Santa Fe directed by Peter Sellars, who had been instrumental in significantly revising the dramatic structure of the work after the initial performances in 2003 at Tanglewood. Whereas Sellars’s production, which had an ensemble of only eight adult women who often surrounded Xirgu like acolytes, placed its emphasis on far-right militarism and showed Lorca being shot in the ass repeatedly on stage after being called a maricón (faggot) during the “Interludio de Balazos” (“Gunshot interlude”), Staufenbiel placed Lorca’s killing offstage, instead bringing on three male soldiers to shoot the dancers, who had previously been shown protesting and lamenting Lorca’s imminent execution. 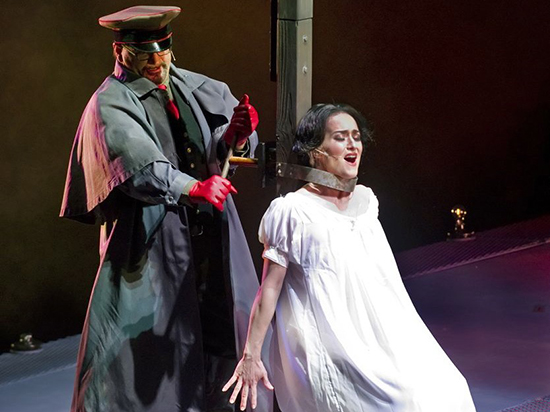 The score places a number of unusual demands on both the cast and the production team. Margarita Xirgu, nominally a soprano role given the luminous high Bs and Cs written for the final moments of her life, spends much of the opera singing at the bottom of and below the staff as a mature woman, but also jumps to usual soprano range for flashbacks to her youth. The role of Lorca is written astonishingly and consistently low, tapping into an unfamiliar husky timbre that is disorienting and intriguing in its power. The primary male role (there are three other small roles for men, in the passion play that surrounds Lorca’s death) is the fascist officer, Ruiz Alonso, who was played in this production by Jesús Montoya, a flamenco singer who produces a full-throated and passionately raw sound that isn’t taught in conservatory voice studios. (Montoya, who recorded the role for Deutsche Grammophon, has sung in multiple productions of Ainadamar, though this is the first one in which he has had to act the role on stage.) All of the performances, including Kherani’s crystalline Nuria, were vocally commanding, but Breckenridge’s committed physical embodiment of Xirgu provided the continuous thread that held the production together. 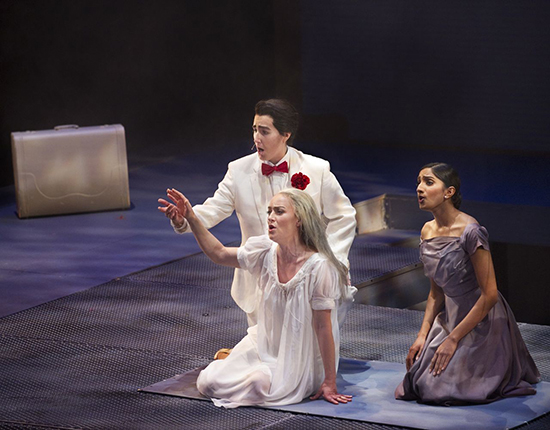 Chavez, Breckenridge and Kherani in the final trio
Photo by Steve DiBartolomeo

Because the vocal parts are often in unusual ranges, the singers are amplified throughout the performance. Also, there are prerecorded elements throughout the show—the sound of drops of water (Ainadamar, which translates as Fountain of Tears, is a reference to a fountain outside of Alfácar), galloping horses, gunshots, and a field recording of a prayer ceremony—in addition to extensive percussion and keyboard parts within a highly spirited and impressively cohesive 32-piece orchestra, conducted by Nicole Paiement. Unfortunately, these disparate elements required a more sophisticated and integrated sound design than what Opera Parallèle was able to provide, and as a result there was inconsistency in the levels of the singers and some occasional distortion at the performance I attended. 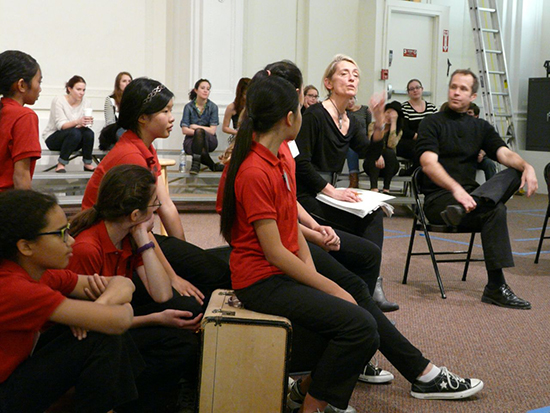 Nicole Paiement and Brian Staufenbiel with members of the San Francisco Girls Chorus, at an open rehearsal

Ainadamar is Opera Parallèle’s first production since changing its name from Ensemble Parallèle. This small company, founded in 1993 by Paiement, has turned their focus to contemporary opera with several successful productions over the past few seasons—last year’s production of John Harbison’s The Great Gatsby was an award winner in January’s National Opera Association competition—and the change brings their name in line with their current identity. The company has been making a concerted effort to open up the rehearsal process to audiences, offering sneak previews and open rehearsals to the public free of charge. Opera Parallèle’s season continues with a double-bill of Leonard Bernstein’s Trouble in Tahiti and Samuel Barber’s A Hand of Bridge in April, and a workshop of the company’s first commission, Dante De Silva’s Gesualdo, Prince of Madness, in June.

***
News in Brief: The San Francisco Girls Chorus announced this month that Lisa Bielawa—composer, longtime vocalist of the Philip Glass Ensemble, founder of the MATA Festival, and a Girls Chorus alumna—has been named artistic director, charged with overseeing the group’s programming and developing new artistic partnerships. Bielawa will divide her time between San Francisco and New York; principal conducting duties at the chorus will be assumed by Valerie Sainte-Agathe.