Opening Concepts—The Themes That Shape Each Year’s Edition of Classical:NEXT

After raising my glass to the visitors at the welcome reception, I’ll already be looking forward to the first sounds of our opening concert. You can sense the hunger of the hundreds of art music people, and it’s a clear reminder that there remains no substitute for people meeting each other in person.

With only four weeks to go until Classical:NEXT, I am taking this opportunity to breathe and reflect, a rare thing to do as general manager during the crunch phase of production. I currently feel like I’ve run a full marathon already and am getting my last energy together for the final sprint.

I wonder where this last year has gone and if we are really opening the doors for the eighth time? As it approaches, you always have to ask: Wasn’t it just yesterday that I was packing my bag for another week of sleepless nights during Classical:NEXT? But then I think back on the last year and I realize how many places I’ve been to and how many people from numerous countries I have had the chance to speak with, and it feels like even more than 12 months have passed. In my head, I am time-traveling back while also thinking a month ahead, to the moment we began and I see all the people filling the home of Classical:NEXT, which has been at Rotterdam’s de Doelen for the past five years. I find myself feeling overexcited, not only to see everyone again, but in realizing that “wow, they actually kept their word to come to Rotterdam!” This of course fills me with pride and gratitude, and I realize: This whole year of effort and hard work was worth it, just for this particular moment of reunification.

After raising my glass to the visitors at the welcome reception, I’ll already be looking forward to the first sounds of our opening concert. The Opening is, after all, THE thing people speak about during the days of Classical:NEXT. You can sense the hunger of the hundreds of art music people, and it’s a clear reminder that there remains no substitute for people meeting each other in person. It’s a very uplifting moment to see people reuniting, and this family-like atmosphere gets stronger and warmer each year. It reassures me and makes me feel that we are doing something right in creating an international community with deep bonds between people who share the same passion. 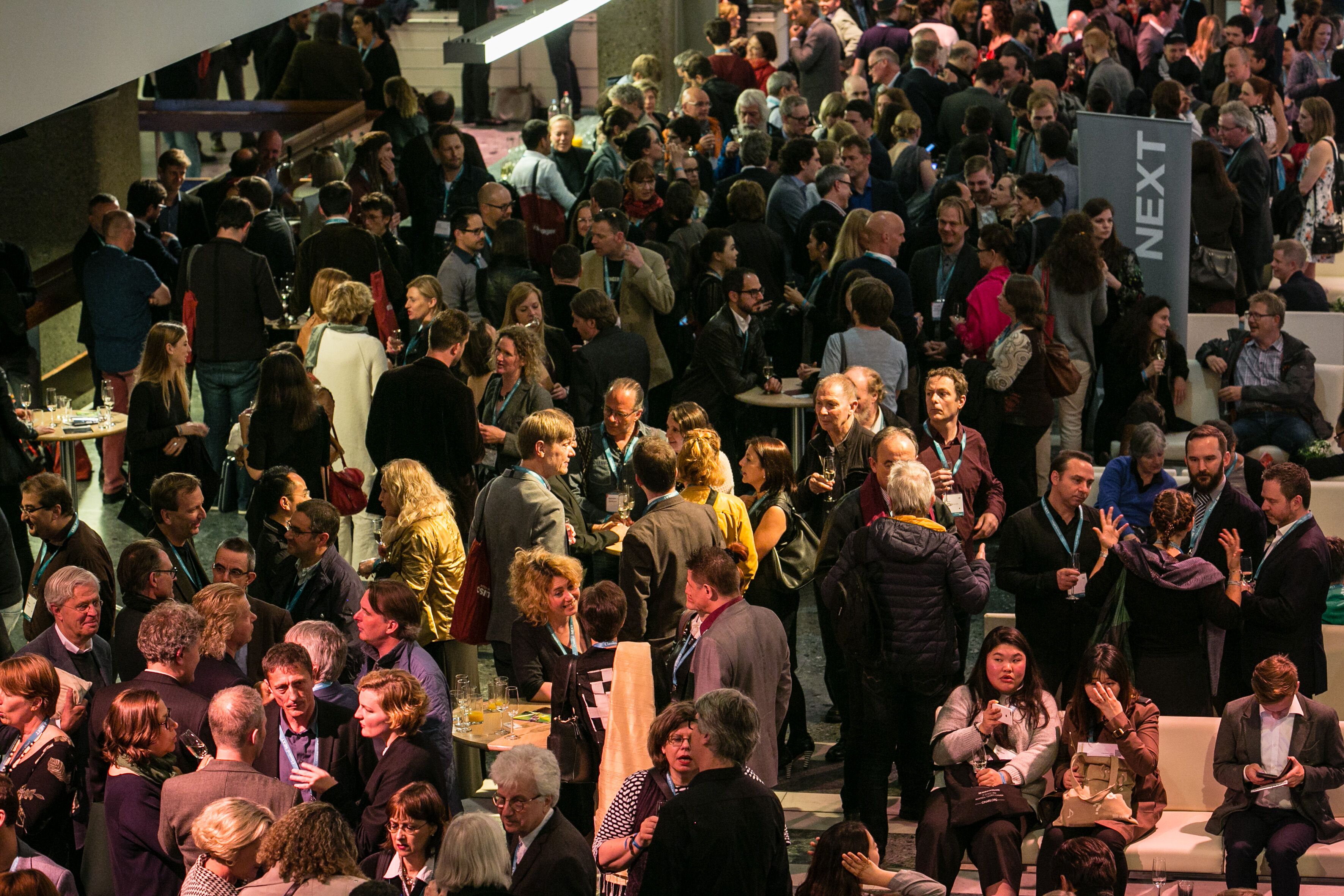 The opening night reception for Classical:NEXT in 2016 (Photo by Eric Van Nieuwland)

Each year we adapt to an ever-changing art music landscape, reflected by the Opening. While the hosts vary—from different institutions, export offices, or collectives—the focus changes with each edition and we can see how selected curators now go above and beyond with their Opening concepts. We are aware that the Opening is a powerful moment and tool, so we use it cautiously. It does not simply signal the beginning of our global music meeting, but sets the tone for the entire event, bringing to the stage the spirit of this gathering, underlining the intercontinental and innovative perspective. They are also a draw for the international media, garnering the most of their attention.

Each year we adapt to an ever-changing art music landscape.

The Canadian-hosted Opening in 2015, at our debut in Rotterdam, set the bar high for the following years. I can still remember the very beginning like it was yesterday, with the fearsome, deep-throat singing and improvisation of Inuit punk Tanya Tagaq kicking off the event. It was as if her voice came from the earth’s core – a unique and unforgettable moment. As a display of Canada’s connectivity and cultural diversity, the variety-packed Opening showcased the excellence of its multifaceted scene with a double keynote speech between Martin Hoffman of the Berlin Philharmonic and Yannick Nézet-Séguin of the Rotterdam Philharmonic and Philadelphia Orchestra, and a video speech by soprano and conductor Barbara Hannigan.

In 2016, the Classical:NEXT Opening helped celebrate the 50th anniversary of de Doelen with “Dutch Mountains,” an interdisciplinary event that highlighted innovative and vibrant music from The Netherlands. Founder and music director of New World Symphony Michael Tilson Thomas served as the video keynote speaker, with double bassist and creator of London’s Chineke! Orchestra Chi-chi Nwanoku adding to the list of prominent names in attendance.

For the sixth edition in 2017, instead of showcasing a country, we felt the urge to set the topic ourselves and featured a small selection of the many projects and people from around the world that focus on inclusion. The performances offered examples of what society can achieve through music, with the Chineke! Orchestra and Afa Dworkin from the Sphinx Organization leading the way and Marin Alsop contributing via video keynote.

In 2018, Classical:NEXT featured a French focus, working closely with Le Bureau Export. It was in this year where I realized that our “missionary tours” are so important. Classical:NEXT, in a way, took the international community on a trip to France and successfully introduced delegates to the supposedly “inaccessible” French market. And we set a new record in French attendance that year.

For this year, our opening “Hear it New!” curated by National Sawdust will be a very special moment I’m sure, particularly in light of the fact that we announced it jointly to colleagues and friends at their home base in NYC at our annual Classical:NEXT Meet’n’Greet in January. While there, I attended outstanding concerts at National Sawdust in Brooklyn and witnessed a way of “tuning in” the audience with a meditation practice. Inspired by this experience, we decided to incorporate a meditation practice of Pauline Oliveros’s “Deep Listening” program in our own Opening and I am very excited to see if it resonates with and inspires the audience the way it did with me.

I’m very proud of the collaboration between women-led National Sawdust and Classical:NEXT.

Additionally I’m very proud to see that our headline for this year’s edition “21st Century Polyphony: More Voices, Greater Symphonies,” will be perfectly reflected in our collaboration between women-led National Sawdust and Classical:NEXT and will mirror our ongoing commitment to giving a voice to groups that are often underrepresented in leadership, on the podium, or in audiences.

With this year’s Opening, we kill two birds with one stone. While matching the focus of giving a voice to underrepresented groups, we also highlight the importance of the United States and the need to be connected in order to bring the perspectives and the artistic content across the pond. “Hear it New!” was therefore a natural choice. America is known as the land of endless opportunity and a field for experimentation in general, whereas other countries sometimes tend to choose stability over taking risks. America is upfront in creating new ideas and this is something that the wider art music community can undoubtedly learn from to free new ideas and unleash an endless stream of new possibilities.

The “Call for Opening Hosts” for Classical:NEXT 2020 is open once again and the team is excited to get new proposals within the next months. More information is available here – https://www.classicalnext.com/programme/opening/hosting.