Open Minds Take on the Closed Door
NewMusicBox
Written By

As the week progressed, it became clear that JCOI is not merely about “jazz composers tak[ing] on the classical orchestra,” as has become the program’s slogan, but in fact about finding justification, perhaps even necessity, for this task in the two musics’ inextricable bonds with each other.

It was as a devoted (if occasionally disillusioned) member of the blogosphere that I first took note of a new program called the Jazz Composers Orchestra Institute (JCOI), whose first “Phase II” orchestral readings were recapped for NPR’s A Blog Supreme by Lara Pellegrinelli last summer. The idea of granting jazz composers greater access to the orchestra stuck me as a potentially fruitful one, and the audio clips seemed to back up that assessment. By sheer luck, my impending relocation from Minneapolis to Southern California was to put me within a short commute of this year’s JCOI Phase I, a week-long, nuts-and-bolts workshop through which selected composers become eligible to apply for next year’s Phase II readings with orchestras across the country. After being selected for Phase I, I was asked and agreed to share some thoughts on the overall experience. (Detailed, day-by-day accounts of the week’s events were also written by composer-participants Samantha Boshnack and Michael Dessen and can be found on the American Composers Orchestra’s Sound Advice blog.)

A joint venture of the American Composers Orchestra and the Center for Jazz Studies at Columbia University, the current JCOI cycle marks the second iteration of the program. Phase I took place August 7-11, 2012, hosted for the first time by the Herb Alpert School of Music at UCLA. Applicants submitted one score, an audio recording, a resume, a letter of recommendation, and a personal statement speaking to their interest, accomplishment, and potential as jazz and orchestral composers. From the pool of applicants, a panel of JCOI faculty selected 37 composers with a wide variety of aesthetic orientations and backgrounds. Composers who attend a Phase I intensive remain eligible to apply for future Phase II readings if they have not previously been selected. 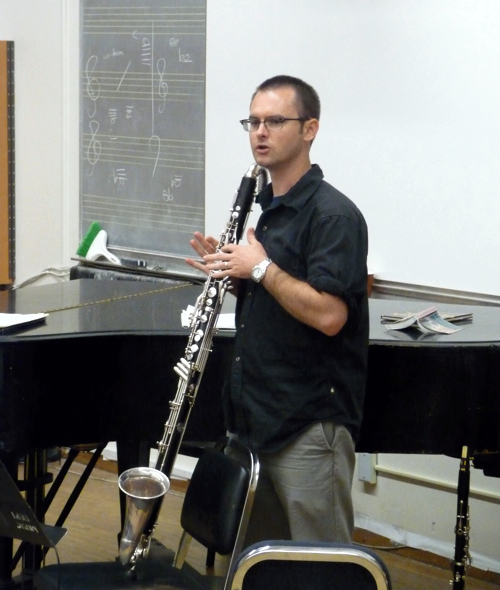 Phase I is labeled “intensive” for a reason: most days featured close to 12 hours of tightly packed presentations of faculty and participant work, instrumental lecture-demos by members of resident ensemble wild Up, and lectures on a variety of both artistic and pragmatic topics. Animated discussions often extended well into scheduled breaks and continued throughout their truncated durations, with many faculty members becoming eager students as well. Sleep was at a premium, and much sugar and caffeine was consumed during the breaks despite the ever-shrinking timeframe in which to do so. As both a commuter and a brass player, I felt the sleep crunch particularly acutely, waking around dawn most days to beat the worst of the LA traffic and arrive at UCLA in time for at least a cursory maintenance session. (It could have been worse: participant Randall Reyman was preparing to play first trumpet on Mahler’s Sixth!)

To be blunt, the proximity of the event, the line on my resume, the potential networking opportunities, a sense that my work was particularly well-suited to the application criteria, and—most of all—a desire to become eligible for Phase II readings going forward, all played greater roles in my initial decision to apply than did any particular Phase I offering. I was an orchestral composer before I was a jazz composer, and while that is certainly not to say that I’ve had an ideal or even adequate amount of experience writing for and working with orchestras, I did have a certain amount of trepidation about fighting for a spot in a competitively selected pool under those circumstances. Would it be worth my time and money? Would I be taking a spot away from a composer who might benefit more from the experience? And did I really want to have to practice at 8:00 a.m. all week just to stay in shape?

Those fears were quickly allayed, though not in any of the ways I had anticipated they might be. For one thing, the contact list we received shortly beforehand was chock full of recognizable names and far-flung addresses, indicating to me that there were highly accomplished musicians willing to travel great distances in order to attend; and for another, the “UnCutting” sessions, where participants presented short bits of their own music, revealed a staggeringly high degree of accomplishment and sophistication in big band, concert band, and orchestral writing. Clearly, the bulk of these musicians would be refining substantial existing skills more so than developing new ones from scratch, and while much useful information on instrumental capabilities, notation, and engraving was indeed shared, this was clearly to be first and foremost a week of moral uplift, finding common cause, and yes, good old networking. (Funny, I think, how many business cards were exchanged despite the prior distribution of the aforementioned contact list!) Suddenly, just being there was not merely inspiring but also truly an honor. 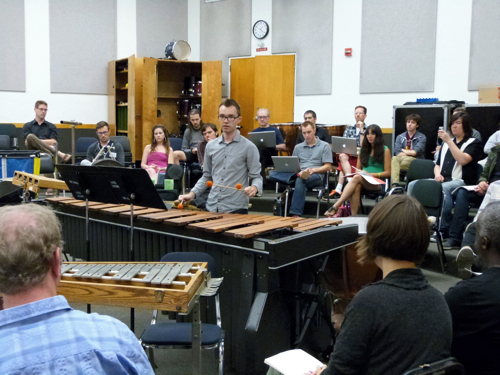 The JCOI Phase I application guidelines state that “any instrumentation, aesthetic, or style” is acceptable for submitted scores—in my experience a rather unusual tack for such an event, not to mention one with the j-word as part of its name. When asked by a participant what it was that set the selected composers apart, George Lewis offered simply that we were all “open-minded” and left it at that. If one might legitimately assume there to be slightly more to it than that, there’s certainly no question that the panel achieved this objective nonetheless. And as for the faculty themselves, from James Newton’s atonal piano music to Paul Chihara’s Ellington transcriptions to Derek Bermel’s odd-meter rapping, there certainly was no shortage of eclecticism on display in the composition seminars either, and more importantly, never any question that these musicians “own” these styles rather than merely dabbling in them, a lesson of paramount importance for any budding eclecticist. 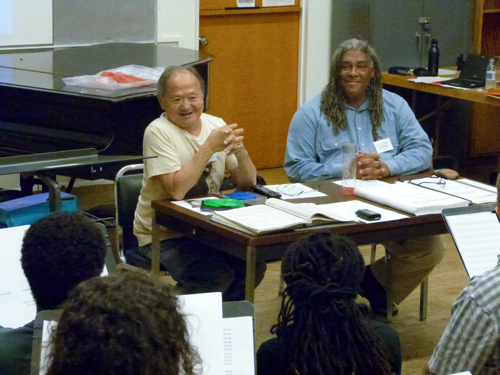 In my eyes, the most remarkable and fruitful consequence of this unusually pluralistic orientation was the time and care devoted to teasing out streams of influence between jazz and classical music, two musical cultures whose staunchest traditionalists remain more eager to take credit for each other’s contributions than to acknowledge their shared history. As the week progressed, it became clear that JCOI is not merely about “jazz composers tak[ing] on the classical orchestra,” as has become the program’s slogan, but in fact about finding justification, perhaps even necessity, for this task in the two musics’ inextricable bonds with each other. Even as a firm devotee of this aesthetic from long before I understood the depth of its implications, I would never hope to live in a world where such eclecticism itself is enforced as dogma in the manner of dodecaphonic or post-bop orthodoxies of the recent past; and yet it is hard to understate how refreshing it was for someone with my background and predilections to experience a conscientious exploration of the subject that never once threatened to descend into cultural land-prospecting or style wars.

In closing, therefore, and perhaps at the risk of belaboring the point, I want to momentarily take this particular issue as a microcosm of larger questions about musico-stylistic and musico-cultural change, and propose two divergent but not necessarily contradictory conclusions one might draw from events like JCOI. On one hand, it was hard to experience the week without developing a newfound sense of optimism regarding the resolution of many frustrations that new musicians from minimalists to microtonalists to metalheads have dealt with vis-à-vis the institution that is the orchestra, not for years, but for decades. Being utterly surrounded for five days not only by like-minded composers but also performers, conductors, and even…administrators (!) is enough to give one new hope. On the other hand, when a good many of these people are your parents’ age and older, this optimism becomes harder to maintain, for if the efforts of such an esteemed group over that period of time have not yet succeeded in prying open more than a few orchestral minds, one must wonder if more powerful forces are not at work.

For me, it was Stephen Biagini, a music librarian for the Los Angeles Philharmonic, who (inadvertently, I suspect) crystallized this point in his talk when he pointed out that orchestral musicians become so notoriously picky about style, notation, and engraving because they see so much of the same music on their stands for so long, and that when it costs upwards of $300 a minute to rehearse an ensemble, efficiency rather predictably comes to trump process. The consequences of such an unfortunate condition remain much clearer than the solutions. There is a well-documented void in our musical infrastructure which JCOI now ably fills a very tiny part of, and for that we can all be thankful. From where I sit, however, in spite of the overwhelmingly positive and uplifting experience I’ve just emerged from, it would be disingenuous for me as someone who holds a de facto orchestral performance degree myself and has spent years working with orchestral and orchestrally minded musicians (and even taken a few auditions) to proclaim the existence of a bold new world based on five days of meticulously planned activities with a cherry-picked cast of fantastic like-minded musicians.

So, at the risk of ending an amazing week on a downer, I’ll just say that an exceedingly tempered optimism is the most my experiences will allow me to muster for the moment, which is less than might be hoped for but more than I entered the week with. At the very least, I can say as a veteran of a few too many -JFs and -TECs (if you don’t recognize the acronyms, thank your lucky stars*) that an explosion of -COIs would in fact be a wonderful thing. I wouldn’t necessarily count on a concurrent explosion of open-mindedness, though it would certainly be nice if it happened. 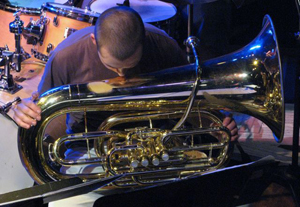 Stefan Kac is a tuba player and composer of jazz, classical, and improvised music. Originally from Minneapolis, Minnesota, he recently relocated to the greater Los Angeles area to pursue a
performer-xomposer M.F.A. at the California Institute of the Arts. He
blogs irregularly, though often at great length, at here.