‘Singers and Musicians’ Part 2: On Conductors, Identity, and Musical Segregation

Every identity comes with inherent biases, assumptions, and privileges to varying degrees. A helpful exercise is to take an identity and think of the immediate mental image that comes to mind when you invoke it. Let’s take “conductor.” Picture a conductor in your mind. What does this person look like? What are they doing? What are they wearing? Who is in the frame with them?

When I wrote the first post in this series, “Singers and Musicians” and Why Our Language Matters, I expected there to be a strong response from the people in my closest circle of friends and colleagues. I was not expecting the response to be quite so far-reaching. While I don’t know how many times the article has been viewed, my own Facebook post with the article was shared over 150 times—certainly a new personal record!

I think one of the reasons the article resonated with people so strongly is because it deals with fundamental issues of identity. These labels and categories that we construct to describe who we are and what we do are critical to understanding how we are viewed in both the music profession and in society at large.

A helpful exercise is to take an identity and think of the immediate mental image that comes to mind when you invoke it. Let’s take “conductor.” Picture a conductor in your mind. What does this person look like? What are they doing? What are they wearing? Who is in the frame with them?

If you have been subject to training in a music academy or conservatory (or if you’ve just been a witness to “classical music” in any form in the last 200 years), your first gut-reaction image of this person is probably male, probably white, probably tall, probably north of 60 years old, probably dressed in a tuxedo, probably gripping a wooden stick, and probably leading an ensemble of instrumentalists usually called an orchestra.

You probably wouldn’t initially think of someone like Lidiya Yankovskaya, the only female music director of a multi-million dollar opera company in the United States.

Or of someone like Francisco J. Núñez, founder and director of one of the world’s most accomplished youth choruses, who also happens to be a MacArthur Fellow.

Or of someone like Jeffery Redding, director of choral activities at West Garden High School in Winter Garden, Florida, who was just named the 2019 winner of the GRAMMY Music Educator Award.

That’s because when we use labels like “conductor,” we don’t usually think of educators, or children’s choir directors, or women. As we consider the word “conductor,” we have to work through the ingrained biases and assumptions about what they often or usually look like and what they often or usually do (which can easily be misinterpreted as what they are supposed to look like and what they are supposed to do). The above exercise is illustrative, because our first impressions have the power to reveal our own biases.

In the majority narrative, conductors work with orchestras (not choruses or wind bands), they work exclusively at a professional level (not in schools, churches, or civic communities), and they tend to look like the conductors of yesteryear: old, white, male, with gray hair and a strong belief that their interpretation was handed down to them by some divine power. The conductor as authoritarian maestro is a trope as usual and pervasive as it is tired and tiresome.

The problem is systemic, and it comes down to how we define “conductor.” Many definitions are woefully inadequate. Take for example the Dictionary.com definition, which states that a conductor is:

a person who directs an orchestra or chorus, communicating to the performers by motions of a baton or the hands his or her interpretation of the music.

In this reading, we ignore any ensembles that are not choruses or orchestras (even though the oldest professional musical organization in the USA is not an orchestra, but a band: “The President’s Own” United States Marine Band, established in 1798).

While this definition thankfully includes women (which is an improvement, as many older definitions did not), it also perpetuates a false belief that there are only two genders, ignoring a wide array of possible gender identities. (An appropriate gender neutral pronoun to use in the above definition would be “their.” Here’s a quick primer on understanding gender, for the curious.)

Aside: Quixotically, the definition also states that a conductor can only communicate with a baton or their hands. To that, I say, Bernstein clearly must not have known what he was doing.

I believe that my article on the careless use of the phrase “singers and musicians” caused such a stir because it forced us to examine the way we define each of these two labels. 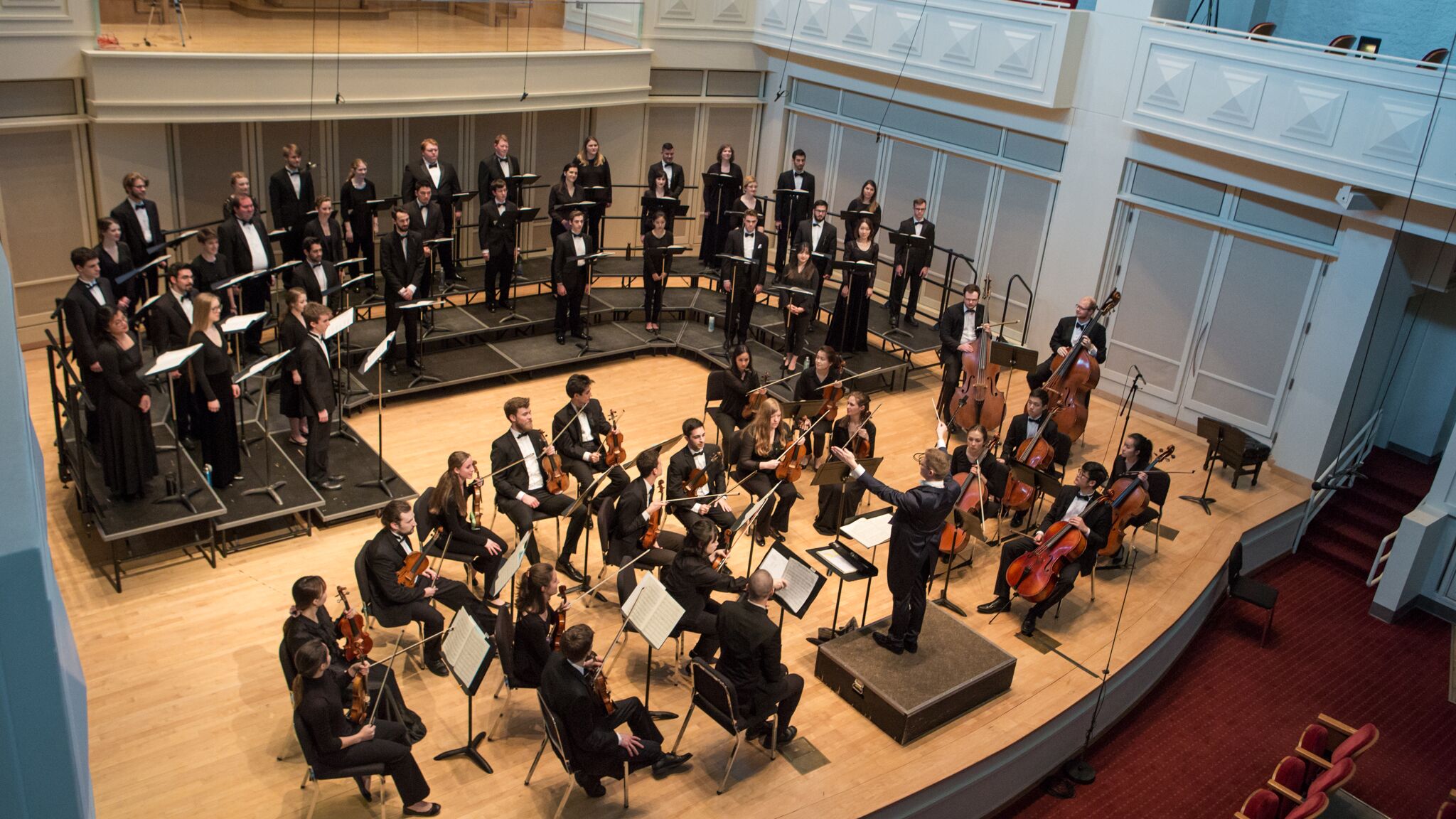 In the comments I saw on Facebook following the article’s publication, I saw many individuals attaching an element of quantifiable musical aptitude or skill to their definition of musician. It isn’t that a singer is not a musician, but that a singer is not as much of a musician as an orchestral player. Or as soprano and IU doctoral student Alejandra Villarreal Martinez stated so eloquently in a Facebook thread:

If we have a pianist who maybe is largely self-taught and plays pop tunes well enough to be paid for making music at the mall, I’d still call him a musician next to the pianist doing Rach 1 with a symphony. They are both getting paid for their artistry, even if they are worlds apart in musical/technical “skill.”

With singers, I think making this distinction also perpetuates the [false] idea among singers that it’s okay to not be as good as instrumentalists, i.e. that we are naturally inferior at music. I had a music director when I was studying for my undergraduate degree who insisted that singers were musicians and had a very high standard. Now, I’m carving a niche for myself singing extremely challenging modern music.

But if you ask me to compare myself to a girl singing in a folk ensemble, who learns by ear but keeps up with the ensemble, I think we should still call her a musician. I think what I’m getting at is that making a distinction between singers and musicians is the result of ingrained institutional elitism.

In other words, when someone makes this kind of distinction, what they are really saying is: who deserves to be called musician?

Case in point: the Pulitzer Prize in Music. Even though the prize is defined very simply as “for [a] distinguished musical composition by an American,” there is a history of awarding the prize to only the very smallest subset of musical styles, essentially blocking entire strata of artistic activity in music from consideration. The Pulitzer Prize committee famously refused to award a citation in 1965 to Duke Ellington, relayed in this story about Wynton Marsalis’ 1997 win:

Since the inception of the prize in 1943—when composer William Schuman received the award for “Secular Cantata No. 2, A Free Song”—every Pulitzer-winning composition spoke in the language of European-derived, Western classical music. As for jazz, blues, gospel, country, spirituals, and every other genre the United States gave to the world, all had been excluded. Completely.

This caused a contretemps in 1965, when a certifiable jazz genius—Duke Ellington—was denied a special citation the jury had recommended to the Pulitzer board. The subsequent and continued exclusion of jazz, often cited as America’s greatest cultural invention, disturbed some Pulitzer board members and distant observers alike. But it took years of effort, hand-wringing, argument, and public discourse to change the trajectory of the music Pulitzer in 1997 [when Wynton Marsalis became the first composer of jazz music to be awarded the prize].

At the root of the problem lies the term “composition.” Who is allowed to claim the mantle of “composer”? Is “composer” an identity to be bestowed as some honorific title? Are songwriters (composers of words and tunes) or arrangers (composers who use pre-existing material) locked out?

I believe our art is made smaller by this segregation of identity and by this rationing of privilege. I believe, as Alejandra does, that the definitions of conductor, composer, and musician should be broadly defined to include all possible forms of music-making.

When Kendrick Lamar won the Pulitzer Prize for Music in 2018, everyone had an opinion, because his selection was historic. Hip-hop was not a genre that the Pulitzer Prize had ever recognized as having the potential for “distinguished musical composition.” In awarding this prize to Lamar, jazz violinist and Pulitzer jurist Regina Carter had the following to say:

It wasn’t a decision of, Oh, let’s just give this to a hip-hop artist, or to Kendrick Lamar, because of that. The piece stands alone. I think it’s a brilliant, brilliant work. I think he’s brilliant. Knowing that we were considering this, I felt really proud of us, the jurors, being able to realize that there’s other great American music and great American art forms besides what we’ve always been told is great.

The right to be called a composer belongs to Lamar as much as it does to a composer of symphonies, string quartets, or operas. And it belonged to him the moment he decided to start writing music to tell his story, not the moment he won the Pulitzer Prize.