Old First Concerts, a series founded in 1970 in a Presbyterian church in San Francisco, presented two exceptional young chamber ensembles performing contemporary music on consecutive Fridays in late March. Both concerts demonstrated O1C’s commitment to emerging and mid-career artists who are exploring non-standard repertoire. The City of Tomorrow, a wind quintet, offered a program comprising 20th- and 21st-century repertoire; the entire Mobius Trio performance consisted of works written specially for their acoustic guitar trio. The series itself has a small but regular and enthusiastic following—an audience willing to sit in hard wooden church pews to hear a broad range of unfamiliar music. 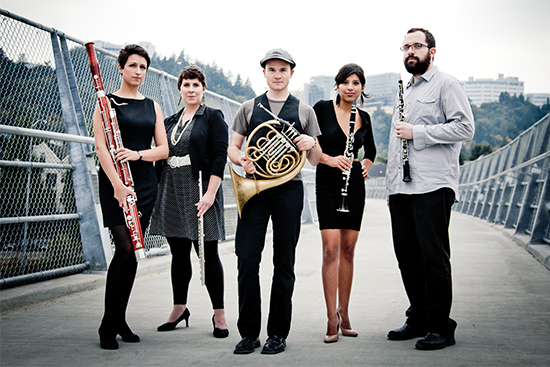 The City of Tomorrow, gold medalists in the 2011 Fischoff Chamber Music Competition, performed on March 15 as part of their first West Coast tour. Two members of the quintet—French hornist Leander Star and flutist Elise Blatchford—are alumni of the San Francisco Conservatory of Music, and Star mentioned that, coincidentally, the two first met at Old First Church. The idea for the quintet formed later, when Star and oboist Andrew Nogal were both graduate students at Northwestern. Since then the other seats have been filled by Camila Barrientos on clarinet and by bassoonist Laura Miller, the group’s newest member, who joined in July of last year.

Despite the fact that the members are scattered across the country—Blatchford and Star are now in Portland, Oregon, while Barrientos is back East in New York; Nogal remained in Chicago, while Miller is down in Austin—this quintet plays with an extraordinary sense of ensemble, not just in terms of rhythmic precision but in tone color, balance, gesture, and sensitivity. Most astonishing in this regard was Luciano Berio’s virtuosic Ricorrenze, which The City of Tomorrow performed sitting in a straight line, facing the audience. Composed in 1987 for Pierre Boulez’s 60th birthday, this piece is filled with recurring quick chatterings and murmurings on one pitch tossed among the instruments. The notes are repeated using a variety of methods, including quick tongue articulations, flutter tonguing, and an interesting technique where single pitches are trilled using alternate fingerings, by which Berio creates the perception of rearticulation in the trembling wah-wah-wahs that result. Amid the chatter, individual soloistic voices pop into relief, and at times all musicians play elaborate grace note figures simultaneously before returning to their nattering. (A very brief excerpt of The City of Tomorrow performing this 16-minute piece is included below.) Despite minimal eye contact given the seating arrangement, these musicians brought off the playfulness of Berio’s colorful and intricately intertwined conversation.


Also programmed were Darius Milhaud’s exquisitely lyrical and restrained La cheminée du roi René (1939), the U.S. premiere of British composer Rob Keeley’s Wind Quintet (2003/2011), and Magnus Lindberg’s Arabesques (1978). The long liquid lines of “Cortège,” the first movement of the Milhaud, were an immediately charming introduction to the second half of the program, and a stark contrast to the extroverted and high-intensity Arabesques, which followed. Written 35 years ago, shortly after Lindberg became acquainted with Berio’s music, Arabesques juxtaposes periods of constant noisy activity with striking events such as abruptly highlighting the oboe alone playing multiphonics or sounding the bassoon unexpectedly in the extreme low register.
The group, which takes its name from a Billy Collins poem and describes itself as “retro-futurist,” expresses the desire to become an ensemble that is generating new music for wind quintet. Though they have presented the North American premieres of the Keeley quintet and Blow by Franco Donatoni, to date they haven’t had any works written specifically for them. However, composers interested in exploring the possibilities of this instrumentation should get to know this skilled ensemble; The City of Tomorrow performs the same program with the addition of Jennifer Higdon’s sextet Summer Shimmers with pianist Katya Mihailova, at the Dimmena Center in their New York debut on April 19.
*** 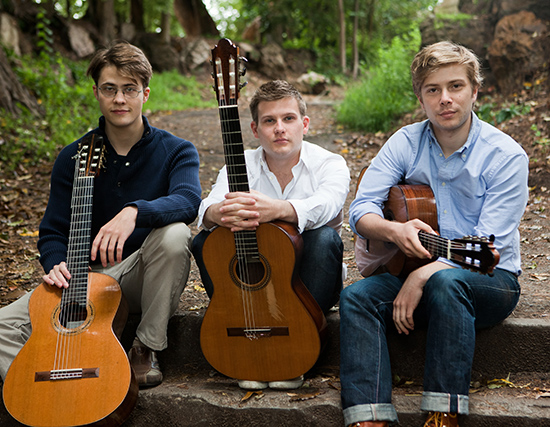 The members of the Mobius Trio, which performed on March 22, are all alumni of the San Francisco Conservatory. In contrast to the members of The City of Tomorrow, who were attired in formal concert garb, the three young men of Mobius (Mason Fish, Matthew Holmes-Linder, and Robert Nance) came out in jeans and khakis, casual sport coats, and hardy boots, which were prominently displayed on the players’ foot rests and elicited much comment at intermission. Their dress reflected the comfortable and unburdened presence that these exceptional musicians have on stage, despite performing very intricate repertoire. Also unlike City of Tomorrow, all of the group’s music has been written explicitly for them; the group started in 2010 with five commissions from colleagues and friends, and works have been accruing since then, with a world premiere by Kevin Villalta at this performance. (An additional premiere by Samuel Carl Adams was initially scheduled but postponed.) 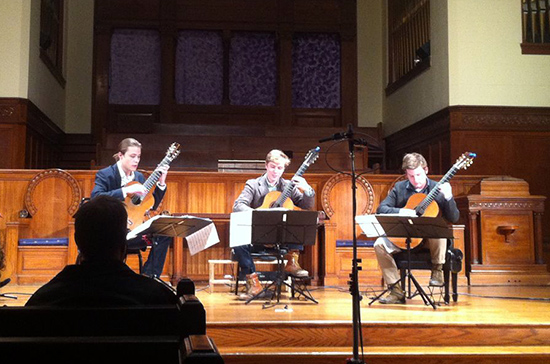 Four of the seven works on this program—pieces by Sahba Aminikia, Danny Clay, Dan Becker, and Brendon Randall-Myers—were included on the trio’s recent debut CD, which was covered on NewMusicBox last year. Of the three new works, More Gargoyles by guitarist and composer Frank Wallace was the least concerned with the exploration of extended techniques and relied instead on Mobius’s superb group sensitivity both in the tender waltz in the first section of the work and a final, intimate duet between Holmes-Linder and Nance. Likewise Adrian Knight’s Bon Voyage showcased the group’s gentle playing by focusing a microscope on the instruments: the three acoustic guitarists, playing entirely on harmonics, were amplified. The steady eighth-note arpeggiations that underlie nearly the entire piece create the sense of a delicate miniature music box, with the soft hazy decay of the vibrating strings quietly hypnotizing the room.

Villalta’s Witch Wagon was inspired by a Salvadoran folk tale about a wagon eternally rattling through the streets as a warning against immorality. The composer searched out sonic possibilities, from strumming all the way up by the pegs to tapping all around the body, transforming the three guitars into a single unrecognizable folk instrument. Strings were detuned and clamped, sometimes yielding a bracing and unsettling moaning effect. There were times when it was really not clear to my ear or eye how certain percussive and metallic sounds were achieved, and by the time the first chord with a recognizable guitar resonance was strummed, it was an unexpected event. In less secure hands the piece might have sounded like a collection of arbitrary sound effects, but Villalta and Mobius created a compelling sonic portrait that was simultaneously detailed and non-narrative.

The natural ease of Mobius’s playing and their unforced integration of inventive ways of using their instruments into their solid base of traditional technique made for a consistently excellent evening. It’s clear from the unity of their playing that the members of Mobius genuinely love making music together, cuing each other with just the lift of an eyebrow or even a hint of a smile. The group next performs on the Peninsula Guitar Series in San Bruno, California, on May 4. Their CD Last Light is available here.