Notes on Belief, Creation, and the Un-serious. Seriously.

An exploration of knowledge and belief in the search for meaning in art (and life)—and the vital role of humor, friendship, and failure along the way.

Writing seems to come from this place: a speaking/thinking person, believing so clearly that they know something definitive about a subject, breathes their loud, strange knowledge onto the written page. This practice is maybe among humanity’s oldest, along with probably: language, storytelling, killing animals to eat them, foraging for berries to eat them, and searching for proper and safe sources of water. And, well, after a bunch of years of study, I can safely say: I know nothing.

I believe things, though. I believe, for example, that time passes slightly more slowly when I’m at home. I believe resilience and kindness are the top two things for people to learn. And I believe that there’s beauty absolutely everywhere, if we’ll have it—it’s all there for us. As I sit and write this, I’m outside a huge farmers market in Ontario, Canada, at the height of Thanksgiving (Canadian) and Oktoberfest (kind of German), sipping a cappuccino at the surly Yeti Cafe (home of the “Pregnant Cowgirl,” which is a breakfast sandwich on a bagel) and watching (a seemingly limitless) bubble machine launch lofty bubbles toward the cool Canadian sun.

I believe in the conscious observation of beauty. And the space between the observed and the observer — that spaced called, for lack of a better name: Art.

If you hold onto that art space too hard (grip it and grip it and grind it), you’ll miss it itself, those things that are really actually there, waiting to be seen. If you know how art is supposed to look or sound—when you’re making it, taking it in, dissecting it critically (to learn, hopefully, or even just if you’re a jerk)—then, well, 1) good for you 2) how’d you learn what it’s supposed to be (the holy grail or some other fount of knowledge?) 3) please stop. As I was saying, if you know and you’ve held onto what that space looks like, you’re going to miss it. You’ve already missed it.

Knowing is definitively serious. (Knowing is just so finite, isn’t it?)

Believing, rather than knowing, is in fact: actively being unserious with a serious purpose.

I’m saying: David Sedaris, Samantha Bee, Louis C.K. and their teammates, they are better artists than us. Because they, as a near spiritual practice, are unserious about serious things. The way lightness, the way humor found its way into our work—

(As a note, I’ll be using the universal “we/our” to describe wild Up’s work in LA here from now on. wild Up is the ensemble I founded in LA….Oh, and as recommended reading, for anyone starting anything, before passing the threshold here: An Article About Startups and Cults.)

—that wicked and wily way that humor snuck in, well, it was actually pretty simple. Here goes:

The conservatory model jumped the tracks, a while back. Not sure if you saw it, but it happened. Humor hit us all because of that model, in reaction to that plan and course of study. The conservatory model rips people to shreds. It rails on us and teaches us all to rail on each other. It’s so beyond broken, it’s not even worth going in to here. Many of us are a product of this immensely broken system that knows, among other things: we’re chaff for its teachers to make a living, we owe it something and it owes us nothing, and that its history is more important than our present. Don’t get me wrong, I believe that the rigorous is good, just that pain for no reason is bad.

An aside moment about Mark Allen and the founding of Machine Project in LA. Machine is a group of artists, performers, and creators, a storefront space and, most importantly, it’s a voice—one of lightness, play as singular pursuit, and context determining the power of content. Their work has changed Los Angeles and changed all of us who have worked alongside it. (It’s also a place that combines aerobics classes with butter churning classes and a space where an ex-con teaches kids to break out of the trunks of cars.)

So add 20 or so post-conservatory twentysomethings to a post-emergence-of-Machine-Project Los Angeles and “voila”: wild Up.

The connecting fabric between Machine and wild Up is namely that we share a member, our guitarist/composer/artist/collaborator/friend: Chris Kallmyer. Chris has done more to aim the creative output of the band than anyone else. If I’m the spiritual leader, he’s the philosophical leader. Chris’s work is a mix of politics, mindfulness, listening practice, and social practice.

Back at it: Since we all met in this climate and space, we’ve been searching individually and together for our community, our music, and—more widely—for meaning, ever since. Probably because wild Up’s been in this place for us to learn and experiment from the start, a number of lessons rose their angry heads early on, and continue to do so daily. Some highlights:

The time that we, leaping over a table, almost got in a fistfight about who would be included on a museum project.

The guy who stood outside our second concert, smoking in the rain, and told my mom, “There’s no way they can do this program. Too much different music. This isn’t new music or classical music.”

The time my friend Paul said, “You all program like John Philip Sousa” (and meant it).

Our first interaction with the music of Julius Eastman — the immense freedom, agency for each performer, and multitudes of calls to action inside of it.

The time a concert completely failed and the embers, drifting with a golden glow down to the floor, lit the entire room.

The questions we ask every time we start a new project: How do we get the ratio of beards down? How can we be advocates for this art? Are we the right ones to be advocates for these sounds? Does it matter? Is it the right time for this, the right place, why, why not? Will people want to leave this concert and go home and have sex? If not, why not? Did we plan enough rehearsal time for the Adams? Do the brass players have to play with ratchets and tin foil again? Related: is it a good idea? Where do we get circular metal paperclips and are they easy to remove from the viola strings? Did we order the right kind of vibrator to put into the piano? Who brought the blue tak?

We’ve learned a ton together and we’ve found some things to believe in:

We believe in fooling around, a lot.

We believe in each other, and watching each other’s bravery in the face of art (and sometimes the insurmountable odds surrounding it).

We believe in putting strange things next to one another and seeing if they rub off.

We believe in dinner and/or drinks as art.

We believe in learning our parts and fighting the thing together.

We believe in sometimes falling apart with people watching.

We believe in sound as science and rehearsal as research (never a moment to communicate how right we all are to one another but a time to simply throw ideas into the air).

We believe in complex emotions and sharing them with each other as part of our artistic practice.

We believe in the impossible, and even though that guy seems psychologically present around every blind corner, none of us have ever met him on the road.

We believe in failure and the beauty of ashes.

We believe in art that comes from the chest, not the brow.

We believe in purity and covering her house with thousands of magazine covers.

We believe people will come together around art that puts a consideration of their interface with it at the core of its being.

We believe in the jump-cut. And in singing a bunch of songs in a room.

We believe in each other.

And we believe in the chase—in following the pursuit of lightness with serious vigor. 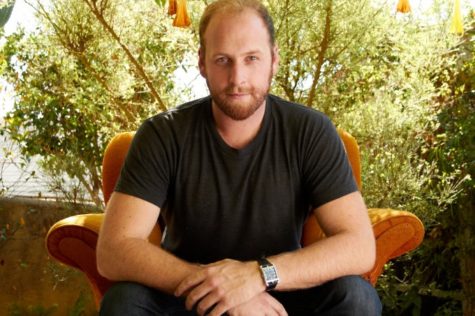 Christopher Rountree is the founder, conductor, and creative director of the pathbreaking L.A. chamber orchestra wild Up, an ensemble founded in 2010 with no funding and no musicians, driven only by Rountree’s vision of a world-class orchestra that creates visceral, provocative experiences that are unmoored from classical traditions.

In the coming year, Rountree makes his debut with San Diego Opera and with the Kitchener-Waterloo Symphony; he helps resurrect works of Graham, Barber, and Chavez with the Martha Graham Dance Company; finishes a forthcoming album with Pulitzer finalist Chris Cerrone; leads wild Up as group-in-residence at National Sawdust in Brooklyn. He returns to the Los Angeles Philharmonic as part of a twelve-hour festival celebrating John Adams and new music in LA, and to Opera Omaha, conducting Jonathan Dove’s Flight.