Chris Cogburn recently curated the 10th annual No Idea Festival with six concerts in Austin and San Antonio. Hailed by the Paris Transatlantic as “one of the finest improvised festivals in the world,” this year’s gathering featured performances by nineteen musicians who made domestic treks from Austin, Houston, Jackson, and New York, as well as those who braved customs with loads of arcane gear from New Zealand, Germany, France, and Mexico. 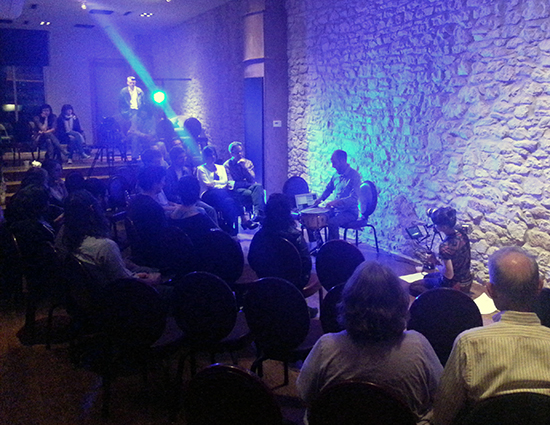 Chris Cogburn recently curated the 10th annual No Idea Festival with six concerts in Austin and San Antonio. Hailed by the Paris Transatlantic as “one of the finest improvised festivals in the world,” this year’s gathering featured performances by nineteen musicians who made domestic treks from Austin, Houston, Jackson, and New York, as well as those who braved customs with loads of arcane gear from New Zealand, Germany, France, and Mexico. Grizzled veterans were joined by new players in a variety of collaborative efforts over the six-day event, one in which new relationships were formed and existing relationships were strengthened through brief but intense rehearsals to facilitate “free improvisations, composition, noise, and sonic interventions.”
A free show on the Pfluger pedestrian bridge served as a somewhat casual pre-festival opener. Hailing from the streets of Mexico City by way of New Zealand and Spain, Misha Marks was joined by Austinite Ralph White for a bit of off-the-cuff busking on a spectacular Saturday afternoon. The Pfluger pedestrian bridge is quite well traveled on any given day and even more so on the weekend, so there was no shortage of people passing and pausing to hear Marks, and White trade fours. The second set featured Cogburn and Dafne Vincente-Sandoval in musical conversation. Their interaction was somewhat more sparse and introverted, but still quite communicative and expressive. Perhaps the most compelling thing about these sets was the fact that the audience had no frame of reference. Some walked by without so much as a turn of the head while others stopped and soaked in every nuance, not necessarily realizing that this was a planned show and not another Austin oddity. Children had some of the most interesting reactions, eyes big with wonder when the sounds would come together in a recognizable form, invisible worlds forming in those little craniums. 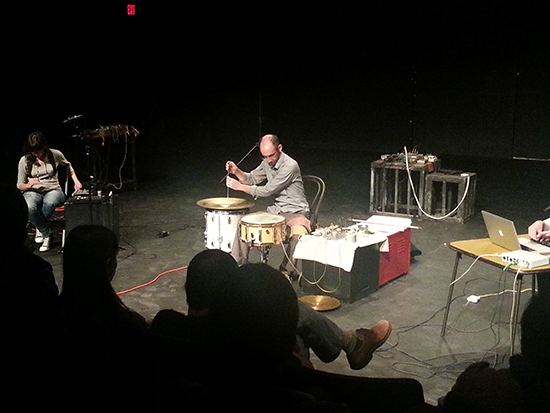 I headed to the Salvage Vanguard Theater for the opening event where Cogburn, Vincente-Sandoval, and her fellow Parisian laptop artist Xavier Lopez performed a set of live improvisation. Among the goals of the festival is to bring artists together not only for one-off shows but also to build multi-year relationships; relationships that serve to more fully develop the depth of communication in each improvisation. Immediately following a brief introduction by Cogburn, a siren dopplered its way down the street outside as if to signal entry into a world in which every sound is musically fair game. Vincente-Sandoval began with chirps and clicks on her bassoon reed as Lopez invoked punches of static from the laptop. Cogburn placed a cymbal on the snare, creating resonance with friction from a dowel placed in its center, which combined cleanly with a rising (and piercing) set of frequencies from Lopez’s laptop. Something about the level of volume and the particular frequencies, all quite high in pitch, filled the room and got into my head, which while not painful was a bit scary. I kept thinking, “One false move with that dial and we’re all toast.” As the work progressed, Vincente-Sandoval gradually assembled her bassoon, continuing to coax sounds that had more body and resonance while retaining the short, sharp character of the opening. The players clearly had respect for each other’s space which resulted in clear background and foreground during the performance with very little stepping on one another’s toes. This was made all the more clear by the very different palettes utilized by each player. Lopez’s static and wholly electronic world played out in stark contrast to the others. Cogburn was able to create long tones which had characteristics in common with elements of Lopez’s world, though they were timbrally distinctive. Vincente-Sandoval’s staccato arsenal could at times echo the static of Lopez but also had an organic quality that served to contrast with those electronics and while blending well with Cogburn’s offerings. Very cool.

The No Idea performance I attended last year was at The Broken Neck, a large warehouse on the east side. In a marked contrast to that visceral space, I found myself at The Performance Loft, an uber-swanky venue in the heart of downtown Austin. I was initially unsure about whether to even go in, thinking I must be in the wrong place, but when I saw Bonnie I knew all was well. I arrived several minutes before Bob Hoffnar (on pedal steel) and Aaron Allen (on upright bass) began their set. Hoffnar and Allen performed a commission by Catherine Lamb, one that involved an unorthodox tuning designed to correspond with the 60 cycle hum generated by standard US voltage as well as the 50 cycle European standard. Bowed harmonics on the bass shared space with low pedal swells, the two combining to form resultant tones that echoed bells with no attack. As Hoffnar swelled up and down in volume, the hum from the pickups lent a body to the sound not unlike what you might hear when walking under a lamppost. It struck me that it didn’t seem incongruous to the work, and Hoffnar mentioned afterward that because the piece was based on voltage cycles, the pickup hum actually fit right in.

Chris Cogburn played a piece written by Bryan Eubanks which was not only the brightest spot among many that evening, but one of the simplest and most compelling pieces I’ve heard in a long time. It’s so simple that I’m not sure how to convey the impact to you, but here it goes. Cogburn began with a roll on the snare, near the rim. Over the course of five or six minutes he gradually increased in volume, though his overall dynamic journey was essentially from mf to f. I suppose that Eubanks borrowed a bit from a magician’s sleight of hand-book, because as I was intently listening to what essentially appeared to be a drum roll I began to hear something else. Or did I? I thought I was hearing some kind of very quiet hiss or static and figured it must be my brain reacting to the prolonged roll. I began to turn my head a bit to “feel” the sound and realized that many people were doing the same thing; looking around the room trying to figure out if that “other” sound was a real thing or some crazy artifact of the roll. I should at this point tell you that the Performance Loft has a very involved surround sound speaker system (360+ speakers!) that is carefully integrated into the walls such that you hardly notice it, and it was from these speakers that a gradually increasing white noise signal was emanating. Maybe it was the shared “A-ha!” moment with other audience members, or the simplicity of the sort of 21st-century Bolero vibe that the piece had, but when the Cogburn and the static reached critical mass, held it, and cut off abruptly to end the work, the place went nuts. It was simply awesome and everyone was excitedly talking about it. I’m not sure if it would have the same impact the second time around or if it would suffer as the movie “Sixth Sense” can on a second viewing because you know what’s coming, but that first time…whoa.

The last set of the evening featured Alvin Fielder on drums and percussion, Damon Smith on upright bass, and Remi Álvarez on saxophone. On a night with static lurking in the darkness and pedal steel guitars tuned to electric sockets, this final set was arguably the most conventional, though I don’t use that term pejoratively. Fielder set up delicate textures with bells, shakers, and other hand percussion while Álvarez comped harmonics. Damon Smith pulled out all the stops, coaxing a wide variety of sounds and attacks from the bass. Clearly part of the conventionality was that the drums/bass/sax setup has a long and storied history which informs any performance, even if that performance strives to be something completely different. However, these players were clearly above all that and spent their set as the other improvisers had at the festival; focusing on each moment and event as they assembled them into a new work of art.

I was struck by this year’s festival—not only by the music, but also by the diversity of audience and venue. Presenting this music in typical concert halls will only go so far and connect with so many. Outdoor afternoon bridge concerts with kids and dogs in attendance, an evening show in otherwise private performance space populated by the usual suspects, and shows in hidden museums all speak to the need to put this music in as many different places as possible so the largest number of people can find it. Cogburn is ten years into this journey, and in that time he has done a great deal to bring the diverse world of improv to the experienced as well as uninitiated in central Texas.