Lots of new music will usher in a new American administration on January 20, 2021. Newly commissioned works by Kimberly Archer and Peter Boyer, classics by Aaron Copland, Julie Giroux, and Joan Tower, and a 46-song Spotify playlist spanning music from The Staple Sisters to Bruce Springsteen to Kendrick Lamar.

UPDATED Lots of new music will usher in a new American administration on January 20, 2021. The musical selections being performed during tomorrow’s inauguration of Joseph R. Biden and Kamala Harris as President and Vice President of the United States of America will include newly composed works for the United States Marine Band “The President’s Own” under the direction of Col. Jason K. Fettig by Kimberly K. Archer and Peter Boyer. Other works performed during the hour-long music program preceding the official swearing include pieces by Adolphus Hailstork and Julie Giroux, the subject of the most recent interview on NewMusicBox. 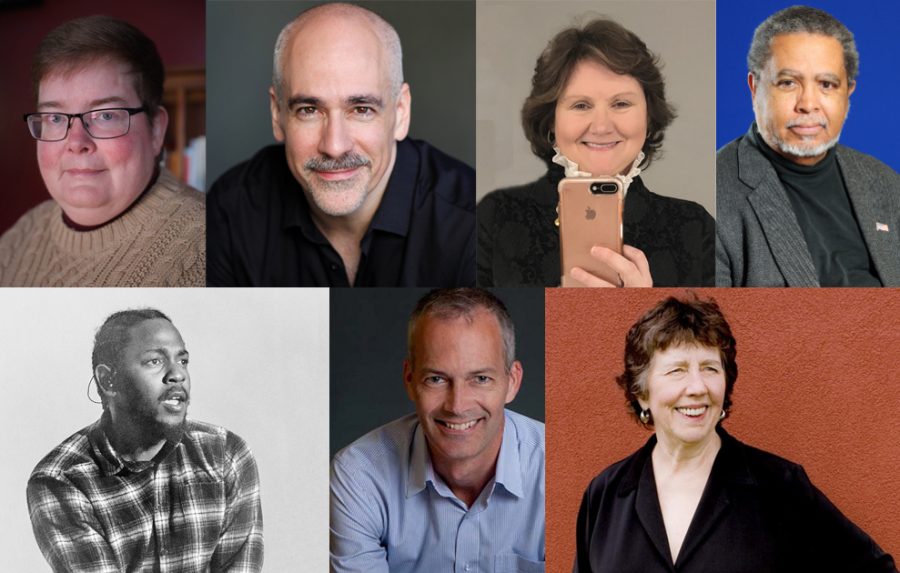 Among the composers whose music will serve as a soundtrack to the 46th U.S. Presidential Inauguration are Kimberly Archer, Peter Boyer, Julie Giroux, Adolphus Hailstork, Kendrick Lamar, James Stephenson, and Joan Tower.

Archer’s Fanfare Politeia celebrates our traditions of a free and fair election, and of a peaceful transfer of power. “This is an incredible honor,” Archer said. “If you had told my 20 year old self that someday the Marine Band would play my music, much less for a presidential inauguration, I would never have believed it.”

Boyer’s new work, Fanfare for Tomorrow, began as a brief piece for solo French horn, originally commissioned by the Cincinnati Symphony and Pops Orchestra last year, as part of their Fanfare Project in response to the pandemic. Boyer significantly expanded and developed that music for a full concert band for this commission. Boyer said, “In these extraordinarily challenging days for our country, I am grateful for this opportunity to contribute some optimistic music to an historic occasion, at which Joe Biden and Kamala Harris will take their oaths of office as the next President and Vice President of the United States. This commission represents one of the greatest honors of my life as an American composer.”

Hailstork’s Fanfare on “Amazing Grace” is scheduled to be performed as the second piece during the USMB’s inaugural program. This marks only the second time that music by a contemporary African American composer has been selected to be part of the repertoire performed at a presidential inauguration, according to Africlassical.com, a website on African heritage in classical music. Hailstork is working on a requiem cantata for George Floyd titled A Knee on the Neck.

The Marine Band has also put together an “Inaugural Soundtrack” which they have posted on YouTube featuring a range of historical curiosities including marches composed for the inaugurations of Abraham Lincoln and James A. Garfield, the latter of which was composed by John Philip Sousa, as well as the newly composed Fanfare for Democracy by James Stephenson. Stephenson wrote a series of articles for NewMusicBox in 2016.)

In addition, Classical Movements, a concert touring company, has formed the Hope & Harmony Ensemble, a group consisting of 14 professional musicians from orchestras and conservatories across the country, to give a virtual brass and percussion performance in honor of the inauguration of Joe Biden and Kamala Harris under the direction of conductor Marin Alsop. As stated on the Classical Movements website, “the ensemble performs two masterpieces of American classical music that perfectly represent our President- and Vice President-Elect: Fanfare for the Common Man by Aaron Copland and Fanfare for the Uncommon Woman No. 1 by Joan Tower.” The stream was posted live to YouTube exactly 24 hours before the inauguration ceremony is scheduled to take place.

Finally, last Friday, the Biden-Harris transition team released a new 46-song Inaugural playlist curated by The Raedio and D-Nice on Spotify which features tracks by A Tribe Called Quest, Beyoncé, Bruce Springsteen, The Staple Singers, Bob Marley, and Kendrick Lamar, who along with Aaron Copland is a past recipient of the Pulitzer Prize for Music.