New Music in New Places: After Hours Concerts in Austin
NewMusicBox
Written By

New Music in New Places: After Hours Concerts in Austin

Nielsen and (most of) his Bel Cuore cohorts held court at the Austin Beerworks brewery, located in a warehouse in North Austin. The ticket price for the show covered admittance to the concert, a few beers 1, and an ABW pint glass. Not a bad deal. 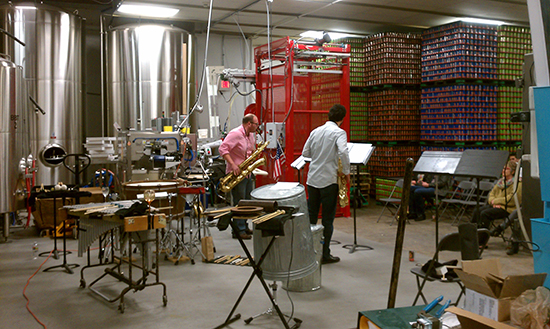 There are pros and cons to consider when messing around with contemporary concert presentation. Change it too little and you may not attract the newer (read: younger) audiences that can sustain your project. Change it too much and you run the risk of alienating your base. The attractive features of your new venue may clash with the needs of the music. I’ve been to more than a few shows where the magical moments were ruined by the ring of a cash register or the frothing of milk. Cell phone etiquette? Good luck. As much as we rail against these protocols, they do serve a purpose. But if you find the right curator, a balance can be struck between cool venue and great music.

After Hours Concerts run by saxophonist Spencer Nielsen held its inaugural concert at Austin Beerworks. Doubling down on the “Why don’t we have a concert at the coffeehouse/bar?” concept, Nielsen and (most of) his Bel Cuore cohorts held court at the brewery itself. Located in a warehouse in North Austin, Austin Beerworks is one of a number of microbreweries that have recently sprung up after so many went south following the bursting of the late ’90s tech bubble. The ticket price for the show covered admittance to the concert, a few beers [1], and an ABW pint glass. Not a bad deal.


Cool new music locations are sometimes hard to find, especially when they are located among row upon row of nondescript warehouses. I get lost in my own home, so I walked in a bit late as the first piece, Rob Smith’s Morse Code Pop, was being performed by Nielsen and Michael Hertel. Written for alto and baritone saxophone, the punchy syncopated rhythms hopped and skipped around a pulse that was occasionally outlined by key clicks and foot stomps mimicking hi-hats. Nielsen followed the up-tempo Smith piece with Joan Tower’s Wings. Mostly lyrical lines were accented with grace notes leading to pedal point trills, all impressively negotiated by Nielsen with a clear, round tone. Sunil Gadgil joined Hertel and Nielsen for William Albright’s Doo Dah. A somber work overall, the three saxes traded and shared long lines that, as they came together, created beating combination tones before resolving. Short fast lines lead to something of a Scelsian moment, a single tone played among the three which seemed to expand and contract before wheeling out of control into a wild polyphony, the lines moving every which way. Side trips into fugue, blues, and jazz found common ground in timbral exploration. Albright’s goal was to make the three instruments into one, and it was particularly impressive to hear the trio simply fill the large room with sound. 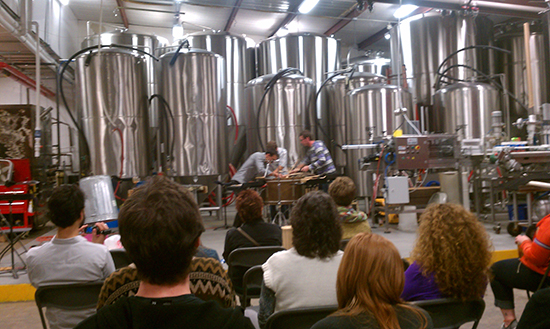 line upon line and the vat cathedral

As Bel Cuore headed for the bar [2], line upon line percussion took the stage. Their set opened with Ian Dicke’s commentary on consumerism, Missa Materialis. In five movements, the piece was not only aurally compelling but also visually stimulating. The first movement evoked tribal rhythms performed on a trash can with broken sixteenth note figures played on anvil. The motoric qualities of this movement gave way to a call and response on ratchets which started with the players “discovering” the sounds the instruments made; a discovery made particularly enjoyable by their theatrical delivery which helped tell the story without descending into campy silliness. A more melancholy section followed, one populated by whistling, musical saw, and vibes, recalling the character of an old radio show. The piece ends with a movement featuring plastic grocery bags, wine glasses, and a brave rendition of Agnus Dei with a bit of vibes thrown in for good measure. Steven Snowden’s A Man With a Gun Lives Here for bass drum (primarily) and three players is in three movements and gets its name from the so-called “hobo code” which consisted of symbols used in the early 20th century to indicate a place to get a meal, potential danger, and other characteristics of a given location. In the first movement, “Be prepared to defend yourself,” syncopated rhythmic patterns that form and disintegrate are interrupted by low rumbles created by a rubber mallet slowly drawn across the head of the drum. “There Are Thieves About” featured grooves played on the rim and various metals, with Cullen Faulk diving in to give “zrbtts” [3] to the drumhead. The final movement shares its name with the piece and featured brushes used on and around the drum. As the brushes swished and banged, a paper bag materialized and was integrated into the rhythmic texture. It was picked up, passed around, and slid across the drum as a crescendo slowly built. At the climax, Faulk (who was positioned in the center) raised the bag in the air where it was stabbed on either side by Matthew Teodori and Adam Bedell. The buckshot within spilled onto the drum, and as it rolled around it looked like flocking birds and sounded a bit like the wind. 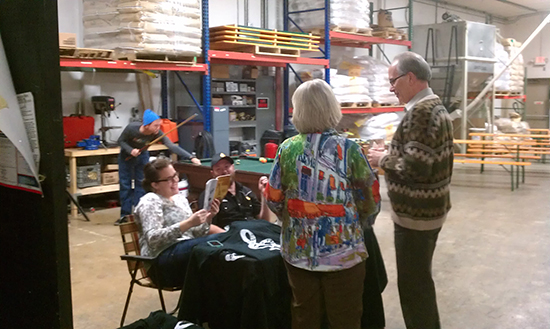 Backstage at the merch counter.

Let’s just say that having a concert in a brewery is likely going to draw a crowd. While it wasn’t church-quiet in there, the ambient noise of the room was certainly within listenable parameters and at times added to the impact of the music. The visual aspect was sort of cathedral-like, with the vats positioned like some huge shell behind the performers, but it looked pretty cool and it gave some acoustic character to the warehouse. After Hours Concerts has shows scheduled at Texas Coffee Traders and Springdale Farms this spring, and I’ll be sure to check them out. Espressos and wheat grass shots, here I come!

1. May I recommend the “Mister Falcon?” It was a mix of two of their beers, and if it wasn’t so delicious I would have had the presence of mind to write them down. Also worth noting is that Mister Falcon and Mother Falcon are both used extensively in broadcast versions of movies featuring Samuel Jackson.

2. I don’t really know if they went to the bar. It’s very possible they headed offstage for bottled water, juice, or a quick run around the building.