While Silk Road’s music is enjoyable, its goals laudable, and the musicians’ skills impressive, hybridization of this sort is not a perfect model for understanding or addressing the issues of modern-day globalization through music. 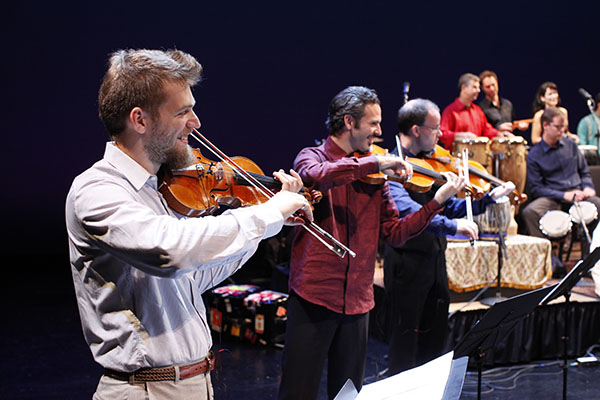 There is little doubt: the particular phase of globalization we are living in (forged from a combination of post-Cold War politics, digital networks, global finance, free market ideology, and cheap travel) has had a major impact on the forms and presentation of art, music, and literature. Within the visual arts, this is a major topic of critical interest, and is widely seen to be manifest in the explosion since 1989 of art biennials. The form of the biennial, as a festival-like exhibition of work from around the world, certainly reflects some aspects of the global experience: the mixing and curation of international artists, the touristic approach to culture, and the boundaryless flow of international capital.

There isn’t really an equivalent in—for want of a better word—art music, even though many of the same structural changes apply. (World music is better served through projects such as WOMEX and WOMAD.) For all their strengths, new music festivals like Tanglewood or the Bang on a Can Marathon can’t attract the same sort of money (and therefore glamour and press attention) as the Whitney, São Paolo, or Venice biennials. Art, through the biennial, can become particularly symbolic of the flow of global capital—often concretely too, as works are bought and sold. Music, as a time-based art form rooted in experiences rather than in objects, cannot attract the same level of capital investment. When it does reflect the flows and structures of globalization, it therefore tends to bring other dimensions out.

In terms of curatorial impact, perhaps a closer analogy to the art biennial might be found among new music ensembles. Single concerts don’t do the same thing and new music festivals, unfortunately, don’t have the same impact. Ongoing projects, however, in which repertories can be collected and developed, in which a sense of global mobility can be projected through international tours and residencies, and for which financial support and prestige can be built up over time, offer a closer comparison.
One example is the Silk Road Project, founded by Yo-Yo Ma. With Ma as its chief advocate, Silk Road is capable of attracting a level of capital, interest, and prestige that is possibly unique in new music. In large part this is due to Ma’s superstar status, but there is also a correlation with the group’s commitment to a globalized, multicultural vision that operates outside of the usual channels of new music, and there is a case to be made that the “global music” angle that Silk Road promotes opens doors in ways that more conventional, “abstract” compositional approaches cannot do. 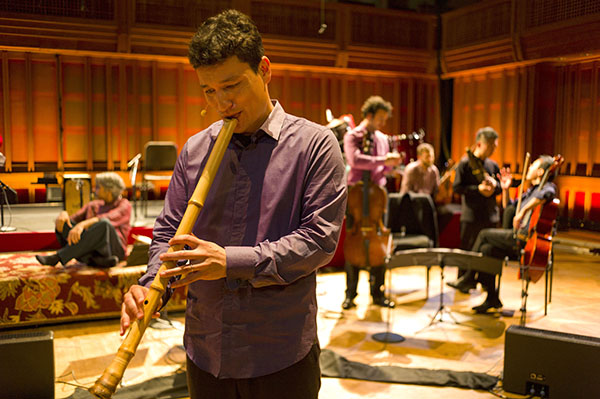 The Silk Road Project was founded in 1998 to “promote innovation and learning through the arts.”[1] At the heart of the concept is the network of ancient trading routes from India and China to Europe, which acts as “a modern metaphor for sharing and learning across cultures, art forms and disciplines.”[2] Two years later the Silk Road Ensemble was formed, a variable collective of around 60 musicians, artists, and storytellers that performs music in accordance with the Silk Road ethos. The ensemble’s members come from more than 20 countries, many of them along the Silk Road itself. They bring with them the instruments and traditions of their own countries—from the gaita bagpipes of Galicia as played by Cristina Pato to Kojiro Umezaki’s Japanese shakuhachi—taking in the instruments and musical styles of southeast Europe, Central Asia, North Africa, India, and China along the way.

The composers involved with the group are similarly diverse in origin. The ensemble has commissioned more than 80 original works and arrangements, most of them from composers originating from outside the conventional Western repertory. They include figures like the Azerbaijani Franghiz Ali-Zadeh, the Argentinean-born Osvaldo Golijov, and the American Vijay Iyer, all of whom have substantial careers beyond their Silk Road work. However, others are little known outside of this context, composers such as the Lebanese Rabih Abou-Khalil, the Tajik-Uzbek Alisher Latif-Zade, or the Mongolian Byambasuren Sharav.
The ethos of the Silk Road Project (with the ensemble as its most tangible manifestation) is built upon the principles of cultural exchange, learning, and understanding. As Ma explains it, modern-day cultural fragmentation can be resolved through the sharing and passing on of knowledge. In musical terms this might be accomplished by something as simple as adjusting your ear to the nuances of a new kind of scale, or a new rhythm. Music, as a flexible, intangible medium, is well suited to this sort of transformative synthesis, but the sympathetic adjustment Ma talks about acts as a metaphor for a more substantial kind of global harmony. Ma’s model is one of transparency, in which progress is achieved through the acquisition of knowledge and understanding, within a collaborative creative process.

When it appears on stage, the Silk Road Ensemble is a model of harmonious unity: despite the national costumes and range of instruments on display, the emphasis is on togetherness and coordination, audible through the music itself, and visible in the relaxed body language and constantly exchanged glances and smiles of the players.


But while Silk Road’s music is enjoyable, its goals laudable, and the musicians’ skills impressive, hybridization of this sort is not a perfect model for understanding or addressing the issues of modern-day globalization through music. At the heart of its model is the notion of collaboration, but as the scholar Timothy D. Taylor has observed, “collaboration” has become an ideology in world music, since at least Paul Simon’s controversial Graceland: “The term frequently appears as a sanitizing sign when western musicians work with nonwestern ones, making their music safe for mass consumption.”[3] Against the background of hybridizing collaboration, differences get softened, he argues, “making Others and their cultural forms desirable in new ways.”[4] As musicians are expected to alter their original sound in order to conform to international expectations, others are expected to produce hybrid musics. The result, reflected in the respective sales of field recordings versus hybridized world music, is that music that is hybridized—like Silk Road’s—is received as more authentic. This is what a global music is supposed to sound like, and so engaging with that process comes to be seen as a more authentic gesture than sticking to your (isolated) roots. As Taylor puts it again, “World musicians may not be expected to be authentic anymore in the sense of being untouched by the sounds of the West; now it is their very hybridity that allows them to be constructed as authentic.”[5]

For all its merits, then, Silk Road’s ideal of global interconnectedness is not without its problems. (I should mention that the biennial model is also much criticized.) This post is the first of four looking at the impact of globalization on the aesthetics of new music. In my remaining three I will look at some alternative approaches, and how they have made their way into the work of other American musicians.