New England's Prospect: When the Working Day Is Done
NewMusicBox
Written By

New England’s Prospect: When the Working Day Is Done

A Poe celebration, an Amanda Palmer appearance, and a Laurie Anderson production were all on Matthew Guerrieri’s beat this month. Come for the art song, but be sure to stick around for the ukulele. 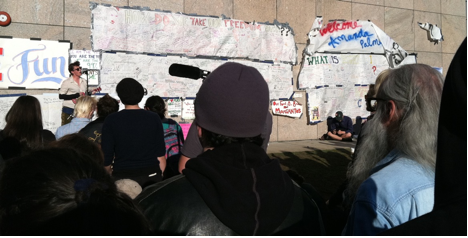 One of the more unpredictable communities in Boston music has comprised a group of pop/rock/other performers and acts that, in one way or another, seem to trace their lineage back to local heroine Amanda Palmer and her breakout duo, The Dresden Dolls. Part punk confrontation, part performance-art boundary-blurring, part art-rock musical ambition, and part burlesque naughtiness, it’s a loose, like-minded orbit, familiar faces turning up in various places—the “Org” shows organized by Mali Sastri of Jaggery are a good example, or the occasional (in all senses) themed shows curated by Mary Bichner, otherwise known as the band Box Five. Bichner’s latest effort was “A Dream Within a Dream,” an evening paying tribute to Edgar Allan Poe, which kicked off a brief tour on October 5 at the Somerville Theatre. (The tour then went to New York, Baltimore, Richmond, and Philadelphia—all the American cities Poe, at one time or another, called home—with local bands joining the lineup in each city.)

One might have expected an evening of non-stop, dark-cabaret gloomy edge; but with emcee Mika Cooper on hand as, often, the only real connecting thread, the concert encompassed a whole catalog of varied inclinations claiming Poe as an ancestor. Alexandra Day, visiting from Philadelphia (Bichner’s old hometown), contributed “Poe at Seven,” a portrait of the author as a Scottish boarding-school student, all discontent and images of distant trains, set to groovy piano pop that put the alienation firmly in the post-Beat road-scholar school of rock. What Time is it, Mr. Fox? brought a set mixing raunchy soul, gutbucket blues, and fierce Irish fiddle, all covered in Victorian cobwebs, but the group’s Poe-specific premiere was “Eleonora,” an arrangement of lines selected from that story (which, as lead singer Brian King pointed out, ranks as one of Poe’s happiest—dead lady notwithstanding); King and his guitar made it into a moody emo romance, a 19th-century alternative prom theme.

Bichner’s three Poe-themed works ran the gamut from melodrama (“Virginia’s Waltz,” with burlesque/performance artist “UnAmerika’s Sweetheart” Karin Webb reciting as Poe’s doomed wife) to art song (Poe’s famous poem “For Helen,” set in polished, pitch-perfect parlor style) to sketch comedy (another melodrama, to Poe’s slapstick romance “The Spectacles,” piano, drums, and strings providing parodic diminished-chord background while Poe impersonator Rob Velella narrated a semi-staged—and eagerly mugged—presentation of the tale). Sassier silliness came with the purposefully rambling, determinedly ragged, rollicking stylings of jojo Lazar and Amy Macabre, better known as WHY ARE THOSE GIRLS SO LOUD it’s ‘cos we’re jewish: ukulele, toy glockenspiel, jagged-razor cheer, and a steady stream of potty-mouthed lit-crit stand-up commentary, combining the morbid goof of a mash-up of “The Raven” and “The Rainbow Connection” and the connoisseurship of a cover of Iron Maiden’s “Murders in the Rue Morgue.” (True to this particular scene’s stock company/community ethos, both Lazar and Macabre figure in other groups as well, most notably the rock-and-roll circus of Walter Sickert and his Army of Broken Toys.)

Bassist Tony Leva (also part of Jaggery), with Michael Dobiel remixing on a laptop, spun a kind of free-jazz/spoken-word critique of “The Purloined Letter,” accompanying Webb performing a gender-bending change of costume. Guitarist/composer Brendan Burns’s “A Valentine for Poe” was especially strong, an acrostically derived theme that Burns, Leva, and drummer Nate Greenslit worked into an arc from Frisell-esque Americana evocation to full-distortion psychedelica and back again.

For a finale, Bichner organized a musically exquisite corpse, dividing “The Raven” into six parts, then assigning each part to a different act for musical realization: Bichner’s operatic lyricism; WHY ARE THOSE GIRLS SO LOUD’s garage-band drive; Mali Sastri in full dramatic cry; Day’s freeform rumination; the jazz duo Bottom of the Well‘s sultry noir; Molly Zenobia spinning a hell-lonesome variation on the most austere corners of American roots music. The wide-ranging, even contradictory variety was as apt a tribute to Poe as any.

The next morning, word went out over Twitter that Amanda Palmer herself was going to make an appearance in the tent city of Occupy Boston, so I put on my favorite Situationist t-shirt and went down to the Financial District. The mood in Dewey Square was cheerful, laid-back, but a little vague. (This was the week before the Boston Police Department tried to bulldoze the protesters into evacuating.) A spokesman tried to fire up the crowd with an Occupy Boston mission statement, but “starting a conversation” is not much of a rallying cry. When Palmer showed up, the contrast was interesting: casual and equally laid-back, but nonetheless focusing all the scattered energy in her person and her performance. (She would make a good conductor.) Armed with only a ukulele, Palmer held the stage effortlessly. She sang covers of Neutral Milk Hotel’s “Two-Headed Boy” and Billy Bragg’s “The World Turned Upside Down,” as well as her own “In My Mind” and “Map of Tasmania.”

There were two songs, though that stood out. Palmer’s cover of Rebecca Black’s “Friday” rewrites the lyrics from the point of view of a downtrodden truck-stop prostitute, illustrating her penchant for pairing light and dark of such extremes that they seem to meet on the other side of the circle. Then there was a new song, so new the title hadn’t settled—it was either “The Ukulele Anthem” or “Play Your Ukulele”—an ode to the ukulele’s no-nonsense, no-excuse, anywhere anytime practicality, with enough punk attitude to suggest that Sid Vicious, Lizzie Borden, and John Lennon might have met better ends had they taken up the instrument. Dazzlingly, incontinently wordy, lethally catchy, “Play Your Ukulele” offered an object lesson in manifestos that any protest movement could learn from.

Palmer has long since taken her place on the alternative/indie frieze of the Boston pop Parthenon, along with Mission to Burma and The Modern Lovers, a few columns over from The Cars and the J. Geils Band. (Aerosmith remains permanently ensconced in the pediment.) But what makes Palmer so wickedly appealing is not that she wears such canonical status badly, but that she doesn’t seem to wear it at all, always seeming to be able to tap back into the seditious joy that comes with tossing up a three-chord wall of noise for the first time. No small part of the fun of “Play Your Ukulele” is in how well it dovetails with Palmer’s own projected personality, the perfect vehicle for a performer who has always been at her most cheerful—and formidable—with a fiendish DIY glint in her eye.

A couple weeks later, on October 22, the mother superior of art-pop, Laurie Anderson, brought her latest piece, Delusion, to Veterans Memorial Auditorium in Providence. In Delusion—originally created for the Vancouver 2010 Cultural Olympiad—Anderson set herself a tricky goal: tell a story about the limits of telling a story. It was a solo performance, Anderson manning keyboards and electronic violin to trigger an austerely synthesized and sampled soundscape; the textual component was heavily oriented towards the spoken word, with only a couple of songs reprised from her previous collection, Homeland venturing into singing.

The show was structured in tag-team style, Anderson alternating between two voices. The vocoder-deepened “male” voice (an Anderson trademark that has taken on enough personality of its own that she has dubbed it “Fenway Bergamot”) cast a gimlet eye at history and power, even questioning the storytelling validity of time itself (“What are days for?”). Her own voice related quirky dreams and dispatches from her mother’s deathbed, with Anderson’s usual eye for telling quotidian detail or suddenly revealing clichés. Anderson touched on this sort of subject in her 2001 song “Slip Away,” written in response to her father’s death; if anything, Delusion makes that dissolve even more agnostic, narratives of identity, and loss, and death, that carefully but mercilessly describe their own ultimate emptiness. (One recurring visual was an animated chalkboard, the writings and drawings continually appearing and being erased.)

Mortality pervades Delusion, but the piece doesn’t feel heavy, its sadness sensed most only in retrospect; in performance, Anderson’s style is too precise, too crisp to admit sentimentality. Grief is only one kind of storytelling, one that just happens to break down more readily upon closer examination. Hence the dual-track narration: the stories we tell to make sense of all sorts of loss—personal loss, loss of ideals, loss of illusions, loss of empire—all wind up similarly absurd and confused.

Musically, Delusion is far more ruminative than the bright, pop-electronica accents of, say, United States, or even the moody-remix atmosphere of Homeland. Ominous rumbles and synthesized choirs stretch behind the Bergamot-voiced, long-view ironies; to accompany her own voice, Anderson again and again used her violin to trigger a pair of sampled clones, moving in parallel triads, both dulcet and eerie, a technological conjuring of a distant, shape-note past—”the sweet, though far-off hymn,” in the words of the old song. In one way or another, Anderson’s subject has always been America, the place, the idea of it, the story of it. In United States/Home of the Brave Anderson found the ideal vehicle for examination, a style that endowed commonalities with stadium-show grandeur, satirizing the engine of American life by embodying it. Delusion feels more elegiac, but still in Anderson’s wry manner: an unsparing dissection of the hand that waves goodbye.