New music seemed to explode out of the ground around Boston in the beginning of February, and performances included the Boston premiere of Georg Friedrich Haas’s in vain, performed by the group Sound Icon and a free-jazz improv show at the Lily Pad in Cambridge, performed by a group of local players: David G. Haas (piano), Jeff Platz (guitar), Scott Getchell (trumpet), Kit Demos (bass), and Luther Gray (drums).

New music seemed to explode out of the ground around Boston in the beginning of February like the tripods in the Spielberg remake of War of the Worlds. Something like this happens the same time most years, a sign, maybe, of how deep the academic calendar has wormed its way into the city’s general pace: it all feels like the natural life cycle of projects too complex to face in the rush of the new school year, so it has to happen now, now that everybody’s back from winter break, but before everybody gets sucked into the accelerating crunch of second semester.

So in the first two weeks of February, one was faced with, among other things,

—A recital by NEC composer and pianist Anthony Coleman

Reader, I missed them. Thanks to an out-of-town venture, an all-day choral festival, the usual demands of part-time church and teaching and writing jobs, and a spousal demand that I watch the Super Bowl, I did not catch a single one of these events. I hang my head in new music shame. 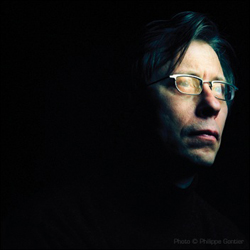 In my defense, I did manage to get myself to a couple of unusually interesting concerts. The first was one of the more anticipated dates on the local new music calendar this season: the Boston premiere of Georg Friedrich Haas’s in vain, performed by the group Sound Icon at the Institute of Contemporary Art on Groundhog Day.

Haas’s hour-plus opus, composed in 2000, is already on a lot of people’s short list for the first great masterpiece of the millenium, and it’s not hard to see why. It’s technically impressive, a spectral-like microtonal vocabulary handled with absolute assurance, both harmonically and orchestrationally. (Among in vain’s 23 instruments is an accordion; as someone who, in my former composer life, often tried to integrate the accordion into ensembles large and small, the subtlety and seamlessness with which Haas does it was particularly jealousy-inducing.) It is a Serious Piece, with a serious theme (it was written in response to a resurgence of right-wing nationalism in Haas’s native Austria), and serious length and breadth. And it has a great existential hook: the lights in the hall fade in and out throughout the piece, and there’s a long stretch near the end that takes place in total darkness.

Sound Icon (I previously wrote about the group back in November) did what is becoming their customarily magisterial job, conductor Jeffrey Means keeping everything balanced and lively, the group’s stamina admirable. And the setting was terrific—the ICA’s sharp, uncluttered auditorium provided a space to match the music’s drama. (The ICA has only rarely programmed avant-garde music, turning over much of their performance calendar to the more mainstream presentations of World Music/CRASHarts, but their Public Programs Coordinator, John Andress, is also a percussionist and a new music stalwart, so maybe more hardcore repertoire might be coming to the place. It really is a great venue for it.)

Still, there was something about in vain that kept its distance. The main material is almost deliberately naïve, scales winding down in seeming perpetual motion, lush chorales, gong strikes of deafening, claustrophobic volume. A lot of the impact of in vain is in its length—it seems to justify the demands it makes on your time and concentration by making those demands.

When it works, it’s marvelous. In the final section, Haas brings back those opening scales, gradually getting faster, then looping back around to the original speed, only to begin the process again. The first time, it was deeply satisfying; when he did it a second time, it got to be a little annoying. But it was the third time through that sold it, the expected ending and the avoided ending somehow coming together in convincing ambiguity.

Other repetitions in the piece delivered far more diminishing returns—those gongs, for instance, so thrilling on first strike, drifted into a white-noise barrier; and a strobe-like flash illumination, detonating away the darkness, was similarly potent the first couple times, but as it came back again and again, the shock wore off, and its use as a coordinating device became distractingly apparent.

Then again, maybe all that was intentional; the music does seem intent on cultivating the gray area between process and expression. The most interesting thing about in vain, at least for me (and, really, the experience of in vain is a highly personal thing, a by-product of so much alone-in-the-dark listening), was how little of the music stayed with me. As it is happening, the piece is often overwhelming in the insistent way it envelops the ear; and yet, once it ends, so much of it seems to just vanish, a practically tangible dream-world dissolved in the light.

In mood and ambition, its boldfaced effects and sensual bleakness, in vain has something of the same tenor—if not the political implications—of the art of Anselm Kiefer, another virtuoso of grim landscapes. I thought of Kiefer’s artist’s books in particular: Cauterization of the Rural District of Buchen, for instance, a bound volume of the charred remains of painted canvases, or his massive sculptural books with pages of lead. But where Kiefer hints at a Hegelian view of historical progress—the past burned away, or sunk into the ground, so something new can grow from the wreckage—in vain posits something more cyclical, those descending scales forever chasing each other down, each acceleration encasing a glacial seed of its own repetition: light and darkness, in perpetual orbit, palpable and unremitting, yet transient and equivocal.

On February 11, I made it to a free-jazz improv show at the Lily Pad in Cambridge, performed by a group of local players: David G. Haas (piano), Jeff Platz (guitar), Scott Getchell (trumpet), Kit Demos (bass), and Luther Gray (drums). The Lily Pad doesn’t seem like much: a tiny storefront (late-arriving concertgoers can fill the entire place with their open-door draft), a few chairs, a shoebox stage space surrounded by hanging carpets. But the sound is excellent, and the disposition is adventurous.

Platz has fronted various groups—a band called Skull Session, which also featured Gray, as well as another band called Bright Light Group, featuring Getchell and Demos—and all four have recorded for Germany-based Skycap Records. Haas was nominally the outsider, but he had played with the late, great Joe Maneri for a time, and in the Boston improv/free-jazz world, a connection with Maneri is pretty much congruous with a connection to the scene.

And the quintet settled into musical conversation like they’d been doing it forever. Here’s a sequence I particularly liked, from their first set: Demos (by far the most far-out of the group, never meeting an extended technique he didn’t like) set up a strange ostinato, slapping his bass with dull thumps while bending the pitch with a whammy pedal; Platz layered some keening electric guitar sustain over it. With Gray and Getchell having temporarily dropped out, Haas added some whimsical percussion, tapping on the piano lid and music rack, John Cage-style. As Haas shifted back to the keys, tossing off bright sparks up high, Platz took over the percussive tapping, stopping the strings at the high end of the neck. This led into a full-band free-for-all, Getchell uncorking tight wails, Gray’s scattered attacks drifting in and out of a solid beat—which then morphed into fast, driving swing. Getchell then took over with a skittering solo—Gray’s energetic ride cymbal seemingly translated into trumpet terms, while Gray pulled back to sparse, ominous tom-toms.

For the next number, Demos moved over to modular synthesizer—a homebrew MFOS Ultimate—and, for a while, the rest of the band simply took in the resulting old-school analog chirrups and yowls with bemused interest. When they did start playing, I wasn’t sure what to expect; but the result was a surprisingly coherent Art-Ensemble-of-Chicago-meets-Doctor-Who vibe. That improv eventually returned to where the first one started, a moody, modal, minor-key ballad atmosphere.

The group’s second set was at once more mercurial—new tempos and rhythms and textures seeming to take off out of nowhere—and more straight-ahead, an anthology of more familiar jazz styles. But this one, too, arrived at exotic locales, winding up with a long colloquy between Demos and Platz that managed to feel both serene and cheekily stubborn (especially since the crowd for the next show was already filtering in).

I find a version of storyboarding to be a useful tool in composing or recomposing a piece as I prepare it for performance. It is a way to move beyond the spine of a piece without simply abandoning it, and it is a creative alternative to a sketch based simply on theory or abstract motivic development.

This quintet seemed to have that sense of scene, of musical setting; as the texture and mood would shift, everybody was quick and perceptive enough to lock into the new surroundings and start working with the scenery, and loose enough to immediately be casting an eye towards the next possible edit. It was provocative to compare this storyboard—fluid, moving, shifting the spotlight, lighting on details—with the storyboard for in vain, all long, carefully composed, slow-changing landscapes. It pointed up, for one thing, how much the construction of in vain is engineered for grandeur, even as the saturnine cast undermines it. The quintet’s improvisations were, by nature, closer to a road trip, the landscapes glimpsed from a moving vehicle. But sometimes, a glimpse can be as mesmerizing as a full immersion.