Amplification, it turns out, is a fine line, and the amplification of this particular concert left me in the position of feeling critical towards a program on which, paradoxically, I actually liked a lot of the music itself. 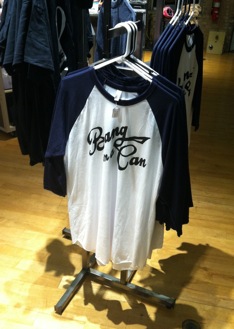 Exit through the gift shop.

Maybe I’m just getting old. Maybe I was too enervated from the long drive through the Berkshires. Maybe, on the job or not, I should have availed myself of the bar set up just outside of the auditorium. But for whatever reason, I spent a good third of this year’s Bang on a Can Summer Music Festival marathon concert thinking: Wow, this is loud.

Amplification, it turns out, is a fine line, and the amplification of this particular concert left me in the position of feeling critical towards a program on which, paradoxically, I actually liked a lot of the music itself. I mean, I like loud music. Punk rock, big bands, Richard Strauss: I grew up on the stuff. It’s like musical comfort food to me. And it’s not like I didn’t know what I was getting into—Bang on a Can concerts are always amplified. Everyone and everything gets a microphone. The music tends to positively revel in volume.

But maybe I am getting old. The marathon, the finale to BoaC’s 11th summer of musical training and camaraderie at MASS MoCA, in the former factory town of North Adams, Massachusetts, was on July 28, which happened to be the same week as a turnover of my personal odometer. Perhaps that’s why I was more attuned to how much opportunity the concert provided to indulge one’s inner cranky old man: the constant social murmur of the come-and-go-as-you-please audience, the determinedly casual concert attire (untucked rounded-hem dress shirts were out in force). There was even manna for a music-history curmudgeon, as when conductor Brad Lubman, introducing the marathon’s opener, George Crumb’s Ancient Voices of Children, called forth that hoary old spectre, the serialist hegemony, insisting that composers writing music with emotionally expressive content in 1970 were either outsiders or “not taken seriously.” Coming in justification of Crumb (who, by 1970, had a Pulitzer prize, Rockefeller and Guggenheim grants, and commissions from the Koussevitzky and Coolidge foundations, which, you have to admit, is pretty good for an outsider that nobody took seriously), the invocation was dissonant enough to make the most hardcore modernist salivate.

Still, the joys of contrarianism aside, the actual performance of Ancient Voices of Children was very good indeed, sharp and fervent. But the amplification was assertive, levels set unseasonably hot. The resonance of mezzo-soprano Megan Ihnen singing into the mouth of the piano hung in front of the proscenium like a heavy fog. The aural difference between onstage and offstage performers was negligible. Everything sounded brightly pressed up against a window, flattened and edgy.

And that sense permeated much of the evening. The amplification inherent to so much of the music turned into a barrier, an extra layer, a mediation; next to none of the music sounded like it was actually in the physical space that it was in. (The one exception was Pauline Oliveros’s The New Sound Meditation, in which all the festival students ringed the audience, lobbing vocal sounds back and forth—while some of the choices came off as a little too self-consciously outré, the sudden sense of a full three aural dimensions was startling.) Even music intended for acoustic performance was filtered through microphones. Lou Harrison’s Alban-Berg-visits-a-sweat-lodge Violin Concerto—a terrific performance, violinist Todd Reynolds in bountiful control, the percussion quintet rock-solid—was nevertheless punched up, with a sheen of artificial reverb skimming over the sound’s surface. The amplification of the Harrison merely felt odd; but to actually muster eight cellists for a fully live rendition of Steve Reich’s Cello Counterpoint (led by eighth blackbird’s Nick Photinos, anchored by Bang on a Can All-Star Ashley Bathgate) and then process it into a harsh, mid-range-heavy, over-compressed pool of sonic mud was downright criminal.

The crescendo peaked just over two hours in, with Ken Thomson’s Incoming, a premiere, in which Thomson—the leader of Asphalt Orchestra, BoaC’s “extreme street band”—was (according to his introduction) encouraged by Michael Gordon to channel the spirit of his other band, Gutbucket. Punkish pugnacity was in ample supply, but to curiously stagnant effect; solo turns for harpist Jennifer Ellis and guitarist Travis Andrews were, by necessity, amplified to the point that the individual instrumental qualities were dulled, the overall sound was an eye-rattling buzz, impressive from the point of stamina but almost dutifully massive—strepitus gratia strepitūs.

It was an import that turned the evening around for me: “Canon 2B,” a movement from Schnee, Hans Abrahamsen’s 2006-08 magnum opus, in a crack performance conducted by Lubman. If the music’s mechanisms are basic—canonic imitation, but with the rhythmic and harmonic ratios in constant flux—the effect was inebriating: somehow skittish and meditative at the same time, the score’s difficult intricacies resulting in an atmosphere of concentration that seemed to wrap around the listener like a blanket. And: it was quiet.

Giacinto Scelsi’s equally meditative Okanagon followed, though here, too, the microphone got in the way—passing timbral congruences between Jennifer Ellis’s harp and Andy Miller’s tam-tam and Gregg August’s bass ended up more perfunctorily laminated together. But the tryptich—Abrahamsen, Scelsi, Oliveros—was enough to reset the ears. Whether the levels were lower or the brain less on guard, the rest of the marathon felt like a chance to consider the place of amplification in the music, rather than a need to withstand it.

Amplification is, after all, a baseline feature of the BoaC style. Introducing his own Four Kings Fight Five, Michael Gordon proudly noted that the performing nonet, under the direction of Lubman, had, in backstage banter, decided to characterize themselves as “a battering ram of sound,” a goal the audience approved. Among those works on the marathon that originated within the BoaC orbit (via founders, former students, or commissions), they were all amplified, they were all designed around amplification—the aggression and saturation of amplified musical sounds is, inherently, one of the starting compositional ideas. And it does change the end result. For one thing, the value of individual instrumental expression correspondingly decreases; the expressive content comes out of ensemble precision, or endurance, or the surprise of an unusual sound. Compare, for instance, the string parts in Four Kings Fight Five, how they interact with the electrified organ and guitar of the ensemble as a kind of floating, flat layer—like a contrasting color plate in woodblock printing—with the strings in Reich’s Eight Lines which, even in their simple contours, and even run through microphones, still came off as orchestrationally spaced and framed such that the subtle shading common to more Classical/Romantic styles of playing can still work its effect. (Reynolds, as de facto concertmaster, again led the way in a spot-on performance.)

Part of this, I think, is an absorption of dominant modes of musical consumption: the rock band, the radio, the recording, the soundtrack. Missy Mazzoli’s Shy Girl Shouting Music, which recostumes a Cathy-Berberian-style vocal psychodrama as Bond-theme lounge-pop (Ihnen again was the soloist), garners much of its effect from the way it takes the margins of microphone-enabled pop singing—the glissandi, the vowel modifications, the vulnerable-seductive crackle of vocal fry—and moves it to the center. Dan Becker’s quintet S.T.I.C. might borrow its processes from dynamic systems theory (Sensitivity To Initial Conditions), but its sound, bouncy and swaggering, riveted with off-balance punctuating motives, was like a THX-enabled music cue in search of an action sequence to underscore. In some ways, this sort of intellectual glance off of popular culture worked better the more fully the composer dressed the part. After the Treewatcher, a world premiere from composer Jeffrey Brooks, unabashed in its semiotic signaling—Middle Eastern pop and British orchestral prog-rock cylinders pumping in a Reichian engine block—was also one of the most engaging pieces of the night, bright, clear, and confident in its rhetoric. (The one more-or-less universal influence was, of course, minimalism, though filtered in various ways; apart from the marathon’s mini-anthology of works by Reich—who blessed the marathon with his presence for the full six-and-a-half hours—only David Crowell’s Waiting in the Rain for Snow seemed to fully embrace popular minimalism in an unalloyed way, gracefully channeling Philip Glass and Reich on a section-by-section basis.)

But another part of the amplification was the primacy of rhythm in so much of the music. For all its pitch-based fascination, great swaths of Four Kings Fight Five, predicated on looping circles of polyrhythmic friction, could plausibly be transcribed for an ensemble of unpitched percussion. Julia Wolfe’s Lick, too, is more about where and when the instruments hit their marks, and with how much force they can muster doing it; the result was both giddily cathartic primal-thump therapy and ultimately wearying, a two-minute punk explosion poured into a ten-minute bottle. But, like Gordon’s and Brooks’s essays, Lick displayed the way rhythm and amplification were entwined in the music’s DNA by design, everything optimized for punch and power, the music attuned to the point of attack and the power of impact. Even David Lang’s Sunray—like Lick, originally written for the Bang on a Can All-Stars—though starting off with a long, bewitching section of hazy, slow-shifting tangles, eventually came around to a more customary BoaC steel-toed groove.

Which, in and of itself, can be a rewardingly potent thing—even Incoming and Lick, each of which I ultimately found to be too much of a muchness, still had sections to warm the safety-pinned cockles of my punk-rock heart. But, in such quantity and volume, the music on the program revealed a certain predictability: two-fisted accents, slightly fractured grooves, minimalist and pop influences proudly worn, all insistent and vigorous. Even though a fair amount of the music was unfamiliar to me, only Abrahmsen’s Schnee and the opening of Lang’s Sunray felt surprising. Caveat: the works by the BoaC triumverate themselves—Wolfe, Gordon, Lang—were old ones, either slightly old (Sunray dates from 2006) or, by Internet-accelerated-mass-media standards, quite old (1988 and 1994 for the Gordon and Wolfe, respectively); their more recent music that I’ve heard has started to expand the circle of the style. By the end of the marathon, I was trying to imagine what the Bang on a Can version of a really hard stylistic turn, of a Stravinsky Threni, or a Copland Connotations, or a Stockhausen Mantra, or even a Clash Combat Rock, might sound like.

The marathon finished with the same Reich one-two combination that was on the Bang on a Can All-Stars concert I heard back in March: Clapping Music, here with Reich and All-Star David Cossin heading two three-clapper teams, and then 2×5, Reich’s big, loud rock-and-roll stew. Even Clapping Music was filtered through microphones, the claps taking on an odd metronome-like quality, but the performance was enthusiastic and, maybe because of the comparative lack of technological mediation, even charming. I had to leave before 2×5—my ride was waiting—but I didn’t mind: the anytime-anywhere ethos of Clapping Music, in good-natured counterpoint to the previous six hours of set-ups and speakers and processed sound, made a perfect finale, the marathon’s stylistic proclivities reduced to the why-not spirit at its core. Besides, in the context of a Bang on a Can marathon, to finish up quiet and understated? That’s pretty punk.